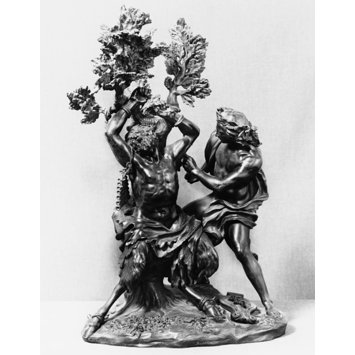 The Flaying of Marsyas

The bronze tells the story from Greek mythology of how the satyr Marsyas, renowned for playing the double flute (or syrinx), and the god Apollo competed in a musical battle between flute and lyre. Whoever won could choose the penalty for the loser. The contest was judged by the Muses, the goddesses of creative inspiration in song, poetry and other arts and the companions of Apollo, so not surprisingly, the god was deemed the winner. He chose to have Marsyas flayed alive. Here Marsyas has been tied to a tree, and Apollo, armed with a knife, is about to make the first cut to remove his skin. Apollo's lyre lies abandoned on the ground, but Marsyas's syrinx is now missing from this cast.

Foggini, born in Florence in 1652, was sent to Rome by Cosimo III to study at the Florentine Academy under Ecole Ferrata. On his return, he became the leading Florentine sculptor, bringing with him the exuberant Baroque style that had evolved and flourished in Rome. A gifted portrait artist, Foggini was appointed Grand-Ducal Sculptor in 1687, which gave him access to the foundry in the Borgo Pinto used by his predecessors, Giambologna and Pietro Tacca. His elaborate bronzes mark the transition from the intimate small Renaissance bronze to larger-scale decorative and theatrical Baroque works. The dramatic movement and flowing drapery are typical of the style, but despite their dynamism, this group and its companion are designed to be seen primarily from the front.

This bronze group consists of the figure of the satyr Marsyas tied to a tree, with the god Apollo at his proper left, armed with a knife to remove his skin. The figures and tree are supported on a base decorated with foliage. Apollo's lyre lies on the ground; the pipes (or syrinx) that had belonged to Marsyas, which originally hung from the tree at the left, is now missing.

The bronze was acquired as 'Italian, late 17th or early 18th Century' as a gift from Dr. W. L. Hildburgh, F.S.A. in 1954. At one time attributed to Gianlorenzo Bernini (see A.2-1967; Christie's catalogues 1912, 1938) and Massimiliano Soldani (undated label text), the bronze has long been identified as the work of Cosimo III de' Medici's Grand-Ducal sculptor, Giovanni Battista Foggini (1652-1725). The Florentine Foggini was sent by Cosimo in 1673 to train at the newly established Accademia Fiorentina (Florentine Academy) in Rome under the sculptor Ercole Ferrata and the painter Ciro Ferri. On his return in 1676, he soon received commissions from the court, and was later appointed both Sculptor and Architect to the Grand-Duke.

This group and its pendant, showing Mercury and Prometheus, form one of the pairings of two-figure allegorical or mythical groups created by the artist in bronze, perhaps inspired by those of his predecessor as Grand-Ducal sculptor, Ferdinando Tacca. The compositions are designed with a primarily frontal viewpoint.

The Museum holds another version of this bronze, together with its companion group (A.2 and A.3-1967), which were given by Grand-Duke Cosimo III de' Medici to the French painter Hyacinthe Rigaud in 1716, and another version survives in the Bayerisches Nationalmuseum, Munich. Each of the casts vary in detail and surface finish, notably the trees. By comparison, this group is of lower quality and possibly later than A.2-1967. It has a redder colour with less of its original lacquer remaining; the right hand of Apollo is lower and closer to Marsyas's right arm; the satyr's head is larger and held further back, and there is a larger space between the head and right arm. There are variations in the positon of the ropes that bind Marsyas. The lyre is strung differently and its position reversed, and the syrinx (or pipes), also missing from A.2-1967, is now lost from this version, presumed stolen in 1964.

A wax version included in the inventory of models at the Doccia porcelain factory survives in the museum at Sesto Fiorentino, and Doccia examples exist. 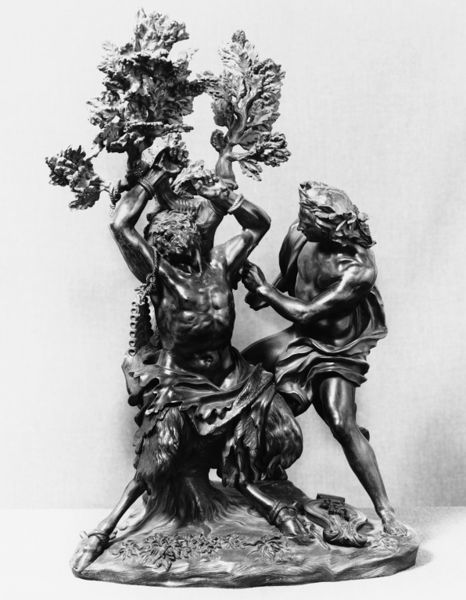