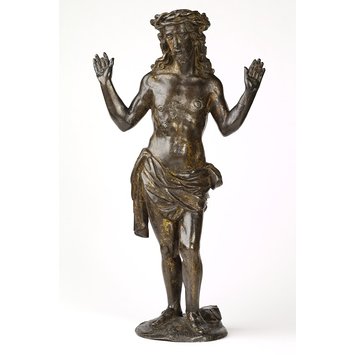 This figure was produced as an aid to prayer and meditation, and this kind of realistic devotional image was very popular in the fifteenth century. The stigmata have small holes, some have pipes also inserted however others have been plugged. Liquid may once have been pumped through to give an appearance of blood, however it could also have been that thin wire was used to indicate the blood.

Christ, dressed in a loincloth, stands with his left foot slightly forward on a circular base with rocks and blades of grass. Both his hands are raised to show the stigmata. He wears the crown of thorns and his hair is parted in the centre and falls over his shoulders. The top of the middle finger of the right hand is missing. Small pipes have been inserted into the stigmata marks; the pipes in the palm of both hands are now plugged. Traces of gilding all over the figure suggest that the whole statuette was originally gilded.

Bronze with traces of guilding

The figure was aquired as German, late 15th or early 16th century. Gert von der Osten suggested the probability of an origin in Nuremberg and a date of around 1500. However comparable bronze figures of this time from Nuremberg do not survive. The present figure can be compared with small silver-gilt figures of the same subject on a monstrance in Augsburg, such as one in the church of St Maurice dated 1470, and another in the Obere Pfarre in Bamberg dated 1477, both attributed to a wokshop in Nuremberg. This suggests an earlier date for this figure, around 1470-80 although there is insufficient evidence to say that it came from Nuremberg.

The smooth naturalistic treatment of the body, as well as the elongated facial features, can be found in a series of plaquettes depicting the half-length figure of Christ as Man of Sorrows, which were probably produced in Augsburg or Ulm between 1460 and 1500. However until more light is shed on the production of bronzes in South Germany in the second half of the 15th century, the figure cannot be ascribed with any certainty to a particular centre.

The figure would most likely have been produced to stimulate private devotion, as it represent Christ as the Redeemer, however the specific original context of the work is unclear. The small holes in Christ's hands, feet and side suggest that liquid was pumped through the figure so that the stigmata appeared to be bleeding. However no pipes have been found inside the figure, and it seems more likely that wires would have protruded from the holes to simulate streams of blood and flowed into a chalice at Christ's feet.

The image would have paralleled the Christ of Sorrows in scenes depicting The Mass of Gregory, as that in the central body of the Corpus Christi altarpiece from the church of St John in Lubeck, dated 1496. A bronze figure of the same subject (M.20-1958) shows a stream of blood from the wound in Christ's side into a chalice held in his right hand, represented by a piece of wire. This version of the subject can also be seen in a painting of the left outer-wing of the high altar in the church of St Martin in Schwabach of about 1506-8. It depicts The Mass of St Martin, and shows the figure of Christ with raised hands (probably a stone sculpture) standing on the capital of a column in the wall of the choir.

Devotional images of this type, often startlingly realistic, were particularly popular in the Late Middle Ages as an aid to prayer and meditation. In this case, coloured liquid may have been pumped through the small holes (some now plugged) in Christ's hands, feet and side, enabling the stigmata to appear to bleed. [2003]
Small pipes are inserted into the stigmata as though the figure might once have functioned as a table fountain, presumably in an ecclesiastical context. [before 1986] 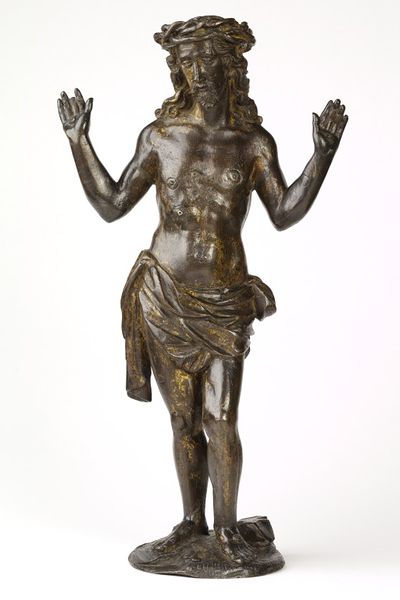