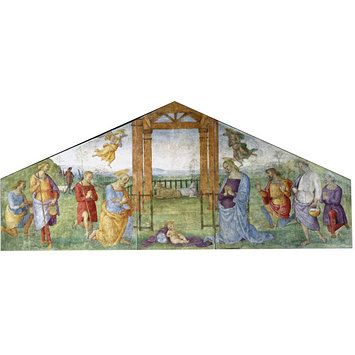 The Nativity: The Virgin, St Joseph and the Shepherds Adoring the Infant Christ

Pietro di Cristoforo Vanucci called Perugino (ca. 1450-1523) may have trained with Andrea Verrocchio and subsequently with Piero della Francesco in Florence. He appeared as a member of the Florentine artists' guild, the Compagnia di S Luca in 1472. Perugino worked as an independent painter, refusing invitations to become a court artist even though he worked for important patrons including Pope Sixtus IV and Pope Innocent VIII, who summoned him to Rome in the 1480s. He settled in Florence in the 1490s and worked between Florence and Perugia. In the 1490s Raphael became his pupil.

This painting is a detached fresco, transferred on canvas, executed by Perugino for the Oratory of the Confraternity of the Annunciation in Fontignano near Perugia. It illustrates the Nativity of Jesus, represented in the centre of the composition, lying on a purple cloak. Behind him are the two traditional animals, an ox and a donkey, while above them fly two angels. On each side are his parents, respectively Mary on the right and Joseph on the left, with a group of shepherds behind them. The mountainous landscape recalls the hilly valley of Umbria where Fontignano is located while the whole composition is depicted in a light pastel-like palette providing the picture with a sense of spirituality.

Triangular shaped canvas; set in a mountainous landscape, at the centre the Infant Christ is lying on a purple cloak with behind him a cow and a donkey and two angels, the Virgin on the right and Joseph on the left, on each side behind them are peasants and shepherds adoring the Infant.

Purchased, 1862
John Fleming, 'Art Dealing in Risorgimento III', The Burlington Magazine, vol, 121, no. 918, p. 572, note 33: "Henry Cole records in his diary a visit to Spence's studio to see the Perugino on 12th November. He must have had it sent to London immediately for on 18th November, shortly after his return to London Barker visited him and, Cole noted in his diary, 'considered Perugino's fresco a fine one'."

Historical significance: This painting is a detached fresco transferred on canvas in three pieces. It was originally executed for the Oratory of the Confraternity of the Annunciation, Fontignano (near Perugia) and located over an arch in the entrance. The painting was flanked by a St Sebastian and a St Rock.
The painting shows the Nativity of Jesus of Nazareth narrated in the Gospels (Matthew and Luke) and in various apocryphal texts. The Nativity is often combined with a subsequent episode, the adoration of the shepherds like in the present case.
The fresco shows the Infant Christ lying on a purple cloak at the centre of the composition. Behind him are a donkey and an ox, respectively interpreted as allegories of the Old and the New Testament. Two angels above them recall the divine origins of Jesus while on each side are his terrestrial parents, Mary, traditionally placed on the right, and Joseph kneeling before him in a sign of humility. A few shepherds on each side adore the Child.
The painting was mentioned by Pascoli (1732) and Orsini (1804). In the middle of the 19th century, the fresco was whitewashed and subsequently cleaned thanks to G.B. Vermiglioli and the priest D. Agostini. In 1843 Pellegrino Succi detached the fresco on the commission of the vicar P. Nazareno Bonomi. It was sold to W.B. Spence for the Victoria and Albert Museum in 1862 and remained on long loan in The National Gallery, London before returning to the V&A in 1972.
This painting is generally accepted as one of the latest works by Perugino who died from the plague in 1523. The composition appears to have been engraved by Silvestro Massari (active 1824-1834) in the 19th century.
Furthermore the compositional idea with an open architectural construction over the Child is a recurrent feature in Perugino's art for this particular subject matter (see Albani-Torlonia collection, Rome, Collegio del Cambio, Perugia and Church-Museum of San Francesco, Montefalco among others).

Fresco painting is among the most complex projects undertaken during the Renaissance. This technique, i.e. painting on wet plaster, originated in the Antiquity (see the surviving fresco of Pompeii, near Naples, destroyed during the eruption of the Vesuvius in 79 B.C.), was reintroduced and developed in the late 13th century and the 14th century particularly in the work of the Isaac master, Giotto and his followers and perfected during the Italian Renaissance, culminating in Michelangelo's technological tour de force in the Sistine chapel, Rome (1508-12). This medium was used to decorate large wall areas of both private and public buildings. Such sizable paintings, in which timing was of critical importance, took careful planning and involved a number of assistants. A precise plan in the form of a drawing or of many drawings was required so that the composition would fit exactly on the wall. The artist could draw directly on the wet plaster (this underdrawing technique is called sinopia) or use cartoons (from the Italian word cartone) from which the composition was then transferred onto the wall. Another method of transfer, used especially in the 17th century for vast ceiling frescoes, was squaring, which replaced the time-consuming and costly cartoon technique.

Fresco, 'The Nativity: the Virgin, St Joseph and the Shepherds Adoring the Infant Christ', Perugino, ca. 1522