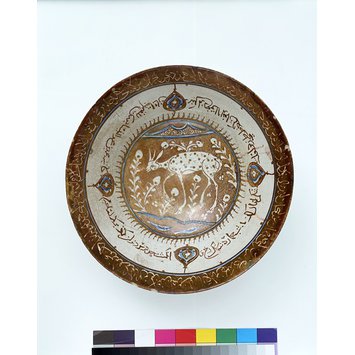 In many Islamic societies, scenes containing humans and animals were a common type of decoration in non-religious contexts. The source of this imagery was usually poetry, the most highly esteemed form of secular literature.

Luxury copies of narrative poems were often illustrated with fine paintings, and the more familiar episodes were depicted on palace walls and objects. Love lyrics accompanied portrayals of beautiful young men and women. Odes in praise of the ruler inspired enthronement scenes. The recitation of poems at court was depicted, as were princely activities such as hunting and playing polo.

In the poetry recited at such entertainments, the gazelle was often a metaphor for elusive beauty. Appropriately, the gazelle on this bowl is surrounded by Persian verses.

Fritware bowl with decoration in lustre highlighted with cobalt. The center of the bowl features a long-legged gazelle by a stream inhabited by two fish, while the cavetto has verses inscribed in lustre on a white background and the rim features verses in white on a lustre ground.

Persian quatrain
The Nu'man tulip takes its colour from your cheek!
The speaking parrot learns to take the sugar from your two ruby-coloured lips.
Jealous of the splendour of your face, the full-moon of the fourteenth night bites its finger.
Inscription in cavetto

Signature
Blessings for the owner, written by Muhammad b. Muhammad al-Nishapuri, dwelling at Kashan.
Part of inscription in cavetto

This vessel was part of a hoard that was deliberately buried by its owner, probably a merchant who lived in Jurjan in north-east Iran, or who was passing through the city. In 1220, Jurjan was threatened by a Mongol invasion. The merchant packed the vessels in sand inside large storage jars and buried them for safekeeping. Soon afterwards, Jurjan was completely destroyed by the Mongols, and the owner never returned to recover the hoard.As a result, the vessels in this hoard survived together for almost 800 years, and in relatively good condition. The probable date of their burial also gives us a good indication of when the vessels in the hoard were made, as well as showing the wide variety of types of decoration that were used to make Iranian pottery at this time.

This bowl was found at Jurjan, in north-east Iran, but was certainly made in Kashan. It feature many of the diagnostic elements of the fully-developed ‘Kashan style’, in which wares made throughout the thirteenth century were decorated. These include its conical shape and the use of underglaze blue for details. However, it also bears the signature of the potter Muhammad ibn Muhammad al-Nishapuri (from Nishapur), “residing at Kashan”. The main decoration features a long-legged gazelle by a stream, which is surrounded by two concentric bands containing quatrains of Persian poetry on the theme of love.

Bowl with lustre-painted representation of a gazelle by a stream surrounded by Persian verses, Iran (Kashan), ca. 1220.

On each vessel, a single image is accompanied by verses in Persian concerned with frustrated love. The figures depicted stand for those who are loved but who do not love in return.

On the lustre dish, a young prince rides out to play polo. The first bowl shows one youth offering another a glass of wine, while his companion watches.

The gazelle on the second bowl is a metaphor for elusive beauty, which flees as the huntsman approaches.

12 Fritware with lustre over and colour in the glaze. Signed by Muhammad son of Muhammad Nishapuri in Kashan
Museum no. C.162-1977
Given by Mr C.N. Ades, MBE, in memory of his wife, Andrée Ades
[Jameel Gallery]
BOWL
White earthenware painted in lustre.
Inscribed: "Written by Muhammad, a man of Nishapur, residing at Kashan".
Found at Jurjan.
PERSIAN (Kashan); early 13th century.
Given by Mr.C.N.Ades MBE in memory of his wife Andree Ades. [Old label] 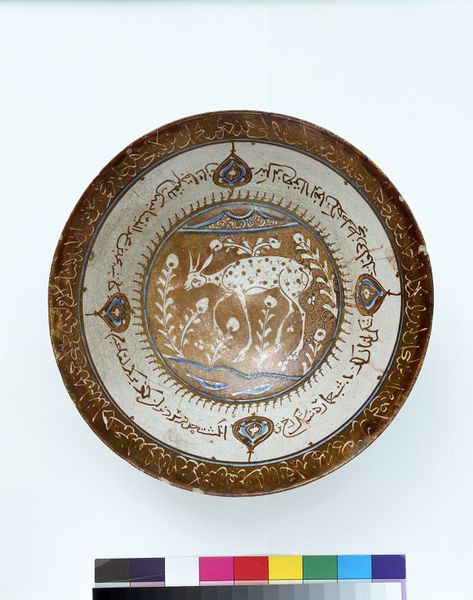