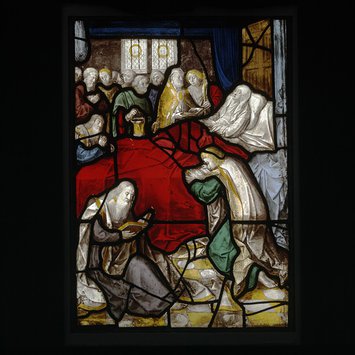 Death of the Virgin

This panel is probably from the great cloister of the Charterhouse in Louvain. This was founded at the end of the 15th century by the Dukes of Burgundy and was financed with donations from members of the ducal family, as well as from clerics of the surrounding areas and local residents. A charterhouse is the name given to a monastery of the Carthusian order.

Very little of the life of Mary, the mother of Jesus Christ, is recorded in the New Testament. Many of the stories relating to her come from writings called the ‘Apocryphal Gospels’. These were composed during the first few centuries in the Christian church, often by church leaders, but they do not have the authority of the canonical Gospels of the New Testament. They were intended to satisfy a demand among early Christians for more information on the life of Jesus and his family.

The story of the death of Mary comes from the so-called Gospel of St John the Evangelist. According to this account, an angel appeared to Mary to announce her impending death. She was told that she would soon be with her son Jesus in heaven. Mary asked that the Apostles might be brought to her so that she could be with them one last time. Angels gathered the Twelve Apostles from around the world and miraculously transported them to her bedside.

Traditionally, Peter is depicted as the chief priest and performs the Sacrament of Extreme Unction (the last rites).

In the centre of a large room, a woman in a white gown lies in a poster-bed which is covered with a thick red bedspread. Surrounding the bed are twelve men of all ages. One elderly man kneels in prayer at the foot of the bed and another, younger man, kneels on the left side of the bed reading a book. Also on the left side of the bed (in the foreground) is an elderly man sitting on the floor reading a book. On the right side of the bed, close to the woman's head, two men in clerical dress perform the last rites - one reading from a text and the other holding a candle. Near them a man in a green robe holds a holy water bucket and sprinkler to assist in the performance of the last rites. There is an open window in the background composed of two lights filled with diamond-shaped quarries and two inset silver-stained roundels. The images on the roundels are not clear.

Probably from a typological series on the north side of the Great Cloister of the Charterhouse of Louvain.

Painted and stained glass panel depicting the Death of the Virgin. Made in the Netherlands about 1520 and probably from the Charterhouse at Louvain.

Made in Brabant. Probably from the Charterhouse of Louvain. 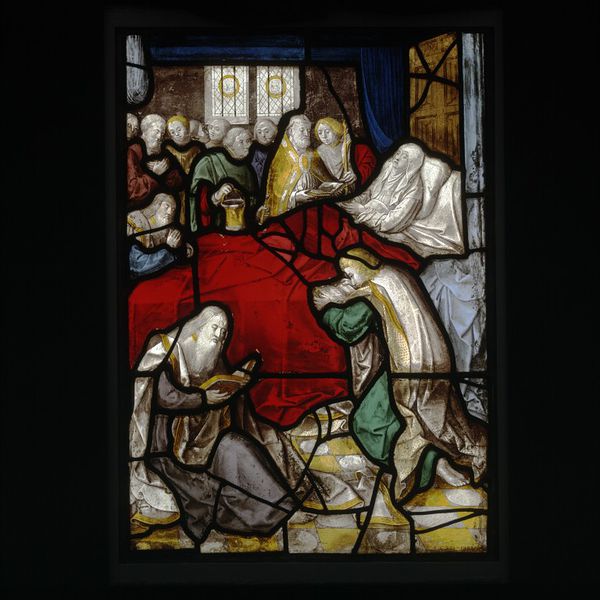