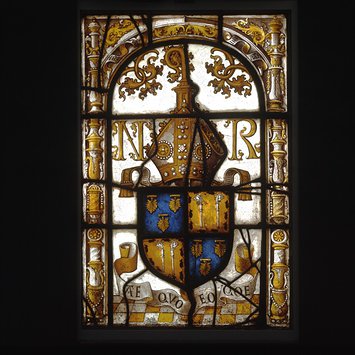 This panel depicts the arms of Nicolaas Ruterius, who was Bishop of Arras from 1501 until his death in 1509. He was a dynamic religious leader and gave generously to educational institutions and to the church. He set up a college for pupils from Arras in the University of Louvain. He also endowed (made permanent provision for) a cell in the south-west corner of the Great Cloister of the Charterhouse of Louvain, and left money in his will to pay for four windows opposite the cell.

The windows were composed of panels depicting scenes from the life of his patron saint, St Nicholas. One of these is also in the Victoria and Albert Museum (Museum number: 213-1908). This panel with his coat of arms formed part of the decorative scheme. It shows the three vine leaves of his family quartered with the arms of the bishopric of Arras.

The Charterhouse in Louvain, a monastery of the Carthusian Order, was founded at the end of the 15th century by the Dukes of Burgundy. It was financed with donations from ducal family members, as well as from clerics of the surrounding areas, such as Nicolaas Ruterius, and from local residents.

In the lower centre of the panel is a shield showing the arms of Ruterius as Bishop of Arras:
Quarterly, 1& 4: azure, 3 vine leaves or; 2 & 3: or, two crosiers addorsed in pale argent, border of rats sable. This is executed in brown/black pigment and silver stain with the quarters 1 and 4 on coloured glass.
The shield is surmounted by a bishop's mitre and emerging from the top is the head of an episcopal staff; this is flanked by the initials 'N' 'R'. Below the shield is a scroll with an inscription. The whole is encased in a round archway and painted in brown/black pigment and silver stain.

AEQUO EOQOE
Patiently, with resignation
The inscription has been partly restored and the letters for the second word have been re-painted incorrectly. It should read: AEQUO ANIMO.
The translation is problematic. The phrase is a standard classical Latin one meaning 'patiently, with resignation'. However, we do not know if Nicolaas Ruterius intended it this way. He could have intended it to mean 'with equal strength' or 'in equal courage'.

Nicholass Ruterius (Nicolas de Ruistre) was Bishop of Arras from 1501 until his death in 1509. He set up a college for pupils from Arras in the University of Louvain. He also endowed a cell at the south-west corner of the Great Cloister of the Charterhouse of Louvain and paid for four windows adjacent to the cell. These were dedicated to the life of his name saint, St Nicholas. His shield, which formed part of this decorative scheme, shows the three vine leaves of his family quartered with the arms of the bishopric of Arras. This consists of two crosiers addorsed with running rats in bordure. It has a crest of mitre and crosier flanked by his initials. Below was his motto.

Nicolaas Ruterius donated eight panels for the cloister glazing scheme. This panel, one with a long inscription that seems not to have survived, and six panels depicting scenes from the life of his patron saint, St. Nicholas. One of those panels, depicting the First Miracle of St Nicholas, is also in the museum (213-1908). These eight panels originally occupied two windows in the cloister wall opposite the cell built and endowed by Nicolass in 1507.

Panel depicting the arms of Nicolaas Ruterius, Bishop of Arras. Originally in the Charterhouse, Louvain. Made in Brabant, Netherlands, about 1520-5.

From the Charterhouse of Louvain 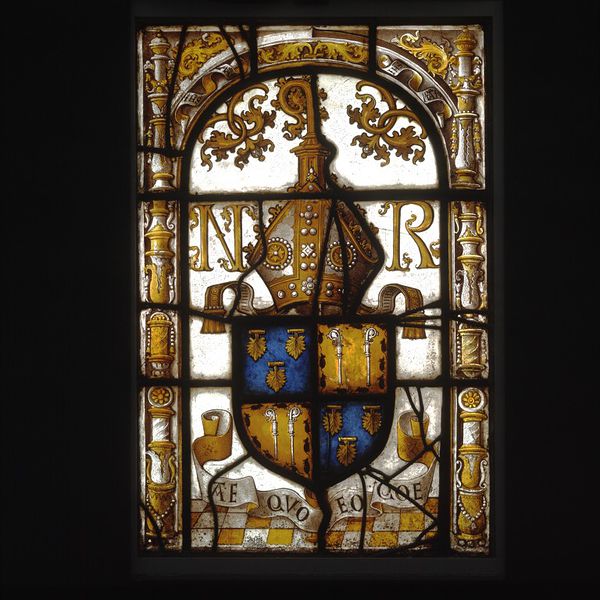