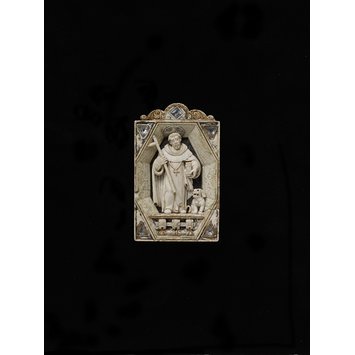 St Dominic with a dog

Ivory was popular as a material for religious subjects, especially during the 17th and 18th centuries. Spanish and Portuguese patrons imported ivories carved with Christian imagery from their territories overseas, such as the Philippines, Mexico and Goa. German and Netherlandish artists were renowned for their dexterity in ivory carving. Their reliefs are masterpieces of composition and virtuosity.
This stone and walrus ivory relief was made in Mexico by the sculptor Diego Reinoso in 1669 and represents St Dominic (1170-1221). Dominic was the founder of the Dominican order, which was active in Central and South America from the early 16th century onwards. The dog resembles a Chinese Foo dog, suggesting an Oriental influence. Little is known about the artist. A Mercedarian priest named Diego Reinoso published a book a vocabulary of an Indian language in Mexico in 1644: Arte y vocabulario en lengua mame..., by 'Fray Diego Reynoso (mercedita)', published by Francisco Robledo in Monterrey (Mexico) in 1644. Kelemen convincingly suggests that this author and the artist were one and the same.

Panel of bone painted and gilt, set with crystal \and walrus ivory; rectangular in shape with the corners cut off to form an octagon. The bearded saint stands with his head lightly leaning to his right, looking straight ahead. He carries a cross in his right hand and a book in his left and wears a habit, with a cross suspended around his neck. A dog sits by his left foot. with mouth open, and with its tongue out, or perhaps holding an object in his jaws. It seems to have a bell around its neck. The pupils of the saint's and dog's eyes are coloured black. The figure stands in an octagonal niche with a silvered backing. Beneath the figure of the saint is a carved geometric decorative pattern reminiscent of Mayan art. The frame in which he stands is engraved with floral patterns and five inset crystals and surmounted with conjoined volutes. On the back is an oval panel, probably of walrus ivory and separately added, the edge gilt, inscribed. The scrolled architectural pediment at the top has also been separately added. One arm of the saint's cross is missing.

Stone, painted and gilt, set with crystals, with silver backing, and walrus ivory

This small devotional object can be seen as medallic art, in that it displays one image on the obverse, and an inscription and date on the reverse. 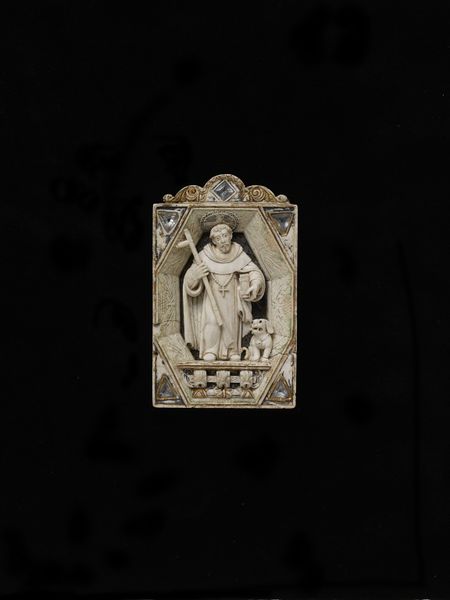