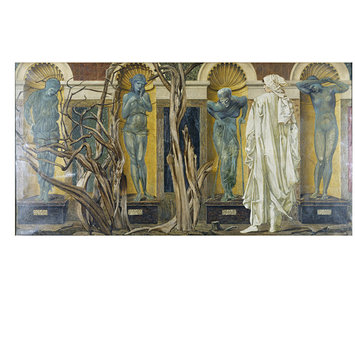 Much of Burne-Jones's art was inspired by medieval sources. In this case the source was Geoffrey Chaucer's The Romaunt of the Rose, which had been the inspiration for a needlework frieze executed for Rounton Grange, Northallerton, Yorkshire, in the late 1870s. This painting is based on a section of that frieze. The Pilgrim, whose white robes symbolise purity, has stopped outside the walled Garden of Idleness. He is contemplating the allegories of vices he finds there: Avarice, Envye, Elde and Sorrowe. According to Burne-Jones's son, Philip, who inspected the canvas shortly after it arrived in the Museum, studio assistants did the preliminary painting of the canvas. He said that much was still awaiting Burne-Jones's input at his death.

Oil painting entitled 'The Pilgrim Outside the Garden of Idleness', a subject from the 'Romance of the Rose (or 'Roman de la Rose').

Edward Burne-Jones (1833-1898) was the leading figure in the second phase of the Pre-Raphaelite movement. His paintings of subjects from medieval legend and Classical mythology and his designs for stained glass, tapestry and many other media played an important part in the Aesthetic Movement and the history of international Symbolism.

Much of Burne-Jones’s art was inspired by medieval sources. The Roman de la Rose, an allegory of courtly love, was written in the thirteenth century by two different authors. It was begun by Guillaume de Lorris around 1230 and was completed by Jean de Meun some forty-five years later in 1275. Despite being condemned by contemporary moralists such as Jean Gerson and Christine de Pizan for its sensuous imagery and language the Roman de la Rose became one of the most popular secular texts of the late middle ages. It was later translated and adapted into Middle-English by Chaucer under the Anglicised title of the Romaunt of the Rose. Burne-Jones is recorded in G. P. Boyce’s diary as visiting the British Museum with Boyce, his sister Joanna and her husband on April 14, 1860, where Burne-Jones showed them a fifteenth century manuscript of the Roman de la Rose. Despite his knowledge of this manuscript and its lavish miniatures, Burne-Jones’s main understanding of the story was through Chaucer’s version.

The modern translation of ‘romaunt’ is ‘romance’ and the subject of the text is the art of love. The story is told as a dream vision where the dreamer-narrator, while sleeping, wakes on an early May morning and decides to go for a walk in the country during which time he discovers a garden surrounded by high walls. The garden within symbolises the state of being in love while the world outside this haven signifies everyday life. On the outside of the walls are painted and carved allegorical figures of vices: Hate, Felony, Villainy, Coveitise, Avarice, Envy, Sorrow, Elde (old age), Pope-Holy and Poverty, all of whom are female. Despite these dispiriting decorations the dreamer sees the garden within as a place of solace and entertainment and strives to gain entrance. Having walked around the garden he finds a gate and, on knocking, is attended by a beautiful woman who allows him entrance. She says her name is Idleness and she leads him into the garden where he sees Mirth (the lord of the garden), Gladness, Love, Beauty, Richesse, Largesse, Franchise (nobility of character, generosity of spirit), Courtesy and Youth who are all joined together in a dance. These allegories largely signify character traits or circumstances that make falling in love possible. At the request of Courtesy the dreamer joins their dance which is symbolic of the act of courtship. However, despite his joining the dance it is not until the dreamer wanders off into the garden alone and looks into Narcissus’ fountain that he is struck by Love’s arrow. As he succumbs to the power of love he seeks out the rose which symbolises perfect love.

Burne-Jones drew and painted many subjects from the Romaunt of the Rose throughout his life. Indeed, the last painting he finished before his death was Romaunt of the Rose: Love Leading the Pilgrim (begun 1877, completed 1896-7; Tate Gallery, London). His first rendition of this subject was in 1874 when Morris & Company were commissioned to do the interior decorations for Rounton Grange, near North Allerton, Yorkshire. Rounton Grange, built in 1872-6, was designed by Philip Web for Isaac Lowthian Bell. The Romaunt of the Rose was the subject of decoration for the dining room where the story was told in three sections. The Pilgrim observing the sculpted allegorical figures of the miseries of the world at the gate of the Garden of Idleness made up the central section of the scheme and hung over the large stone fireplace. On either side there were two further scenes: one wall was adorned with the scene of Love leading the Pilgrim to safety and the other depicted the Pilgrim entering the Garden of Idlenss. These textile friezes (1874-82 William Morris Gallery, Walthamstow) were embroidered by Bell’s wife Margaret and daughter Florence from the drawings of figures drawn by Burne-Jones and William Morris’s briar rose background.

The inspiration for the V&A’s painting was taken from the section of the needlework frieze executed for Rounton Grange that existed above the fireplace. The Pilgrim, whose white robes symbolise purity, has stopped outside the walled Garden of Idleness and stands contemplating four carved images of the vices, which are most likely Avarice, Envye, Elde and Sorrowe, although they do not strictly follow Chaucer’s descriptions. According to Burne-Jones's son, Philip, who inspected the canvas shortly after it arrived in the V&A, studio assistants did the preliminary painting of the canvas. He said that much was still awaiting Burne-Jones’s input at his death. However, he did also state that he thought that the trees and part of the marble had been worked over by Burne-Jones, that Burne-Jones had put the bolder touches on the bronze figures and that the face of the figure in white was probably by him. T. M. Rooke, one of Burne-Jones’s assistants, also inspected the painting and his views corroberate Philip Burne-Jones’s on a number of points. Rooke was of the opinion that the canvas was probably first painted by Matthew Webb. He also said that he thought he discerned Burne-Jones’s hand in the green touches on the statues, parts of the branches, the face of the white figure, and the upright marble on the left of the central door.

Oil painting entitled 'The Pilgrim Outside the Garden of Idleness', a subject from the 'Romance of the Rose (or 'Roman de la Rose')', by Edward Burne-Jones. Great Britain, ca. 1893-1898. 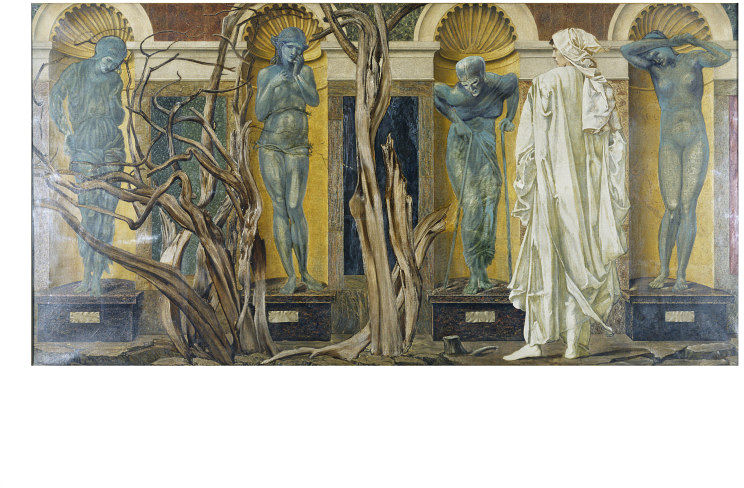