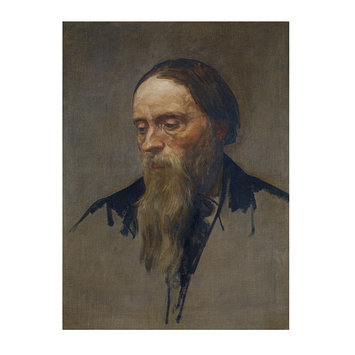 Alphonse Legros (1837-1911) was born in Dijon where he entered the Ecole des Beaux Arts before attending the ‘Petite Ecole’ of Horace Lecoq de Boisbaudran (1802-1897) in Paris and then Ecole des Beaux-Arts. he started exhibited at the Salon in 1857. In 1863, Legros visited London where he found admirers and patrons, notably the Ionides family, and was ardently promoted by the brothers Dante Gabriel Rossetti and William Michael Rossetti. An etcher, a painter and a sculptor, he succeeded Edward John Poynter (1836-1919) at the Slade School in 1876 and was naturalized as a British citizen in 1880.

This work is a fine example of Legros’ portraits of scholars and professors of his time. The sitter is the pre-Raphaelite painter Edward Coley Burne-Jones (1833-1898) who was a close friend of his. This work shares many affinities with Legros’ famous timed head-studies, a method he developed while lecturing at the Slade School. This oil sketch was most likely executed during a single sitting, showing thus the mastery of the French draughtsman.

Historical significance: This painting is a fine example of Legros' portraits. It portrays the pre-Raphaelite painter Edward Coley Burne-Jones (1833-1898), who was a close friend and one of the most enthusiastic supporters of Legros.
This portrait looks very similar to Legros' famous timed studies he performed in front of his pupils in the Slade School and of which the museum owns two exemplars (see 821-1877 and 823-1877). His method was described as followed:
'On stated occasions a special model is ordered, and the professor, standing in the centre of the life school, paints a complete study-head before those students who are sufficiently advanced to be admitted to the life class. His method of work is simple in the extreme; the canvas is grounded with a tone similar to the wall of the room so that no background needs to be painted. […] In about an hour and a half, sometimes in less time, the study is completed, and the watchers have probably learned more in the course of that silent lesson than during three times the amount of verbal instruction.' (The Magazine of Art, vol. 6, 1883).
This method founded the influential 'Slade tradition' of fine draughtsmanship. Legros did many oil sketches of this type, which were extensively copied by his pupils. This technique, although used for centuries by European artists, astonished the Victorians (MacDonald, 2004).
Legros was sometimes invited to perform similar life class in other venues. For instance, Legros was invited in 1880 by his friend Sydney Colvin, then director of the Fitzwilliam Museum in Cambridge to paint a timed head-study there. He portrayed then the reverend Robert Burn and gave the study to the Fitzwilliam Museum, which still owns it (Inv. 94*). In this regard it is not unlikely that Legros performed this portrait in public.
However there are also a couple of critical accounts of the process: Camille Pissaro (1831-1903) but also Walter Richard Sickert (1860-1942), James McNeill Whistler (1834-1903) and John Ruskin (1819-1900) criticised among other things the 'entire absence of relation between the head and the background' (Sickert, 1947, p. 239).
Legros executed another portrait of a younger Edward Burne-Jones in 1868-69, Art Gallery and Museum, Aberdeen, which shows a finished and accurate look indebted to the Venetian art of portraiture. 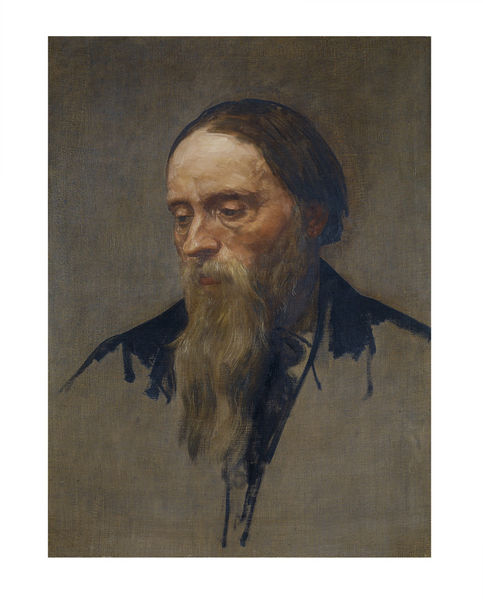