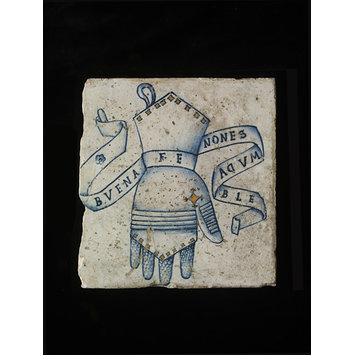 These tiles were from a group commissioned by the Gonzaga family, rulers of Mantua, following the marriage of Francesco Gonzaga to Isabella d'Este. Thirteen cases of large floor tiles, decorated with a variety of Gonzaga family mottoes and emblems, were delivered to the Castello San Giorgio on 1 June, 1494. These were laid in Isabella's studio, where they found favour both by virtue of their bold and colourful designs and their ability to deter mice.

Floor tile of tin-glazed earthenware painted in blue, and orange-brown and bearing an emblem of the Gonzaga family: a steel gauntlet with attached scroll inscribed in Spanish "BUENA FE NON ES MUDABLE" (Good faith is not changeable). Square, and relatively thick, the back with an arrangement of three concentric rings, separated by areas from which the clay has been scooped.

It is likely that these tiles correspond with those described in documents of 1494 as bearing the devices of Marquis Francesco Gonzaga (see Gobio Casali, 1981, and Mallet, 1981). Probably urged by his wife Isabella d'Este, this set was apparently ordered by Francesco for a small room (subsequently known as the camerino della mailoica) in the Gonzaga villa at Marmirolo, though in the event, some were also layed in Isabella's studiolo in the Castello di San Giorgio at Mantua. Documentary evidence records that by Jan 1493 the drawings for the designs were made but that patience was needed as bad weather prevented the tiles drying out quickly. By March 1494, the tiles were ready, and thirteen cases containing them arrived and were unpacked at the castle in Mantua on 1 June. A portion then went to Marmirolo. Isabella studiolo was apparently paved on 8 July, on which day her infant daughter's governess, Violante de Pretis, wrote to Isabella to inform her, commenting that it was very necessary due to the mouse nests beneath the floorboards. The potter responsible for the tiles is not mentioned in any of the correspondence, although it is likely that he may have been Antonio dei Fedeli, from whom the Gonzaga were ordering tiles in 1496.
It is uncertain whether the V&A tiles (334-1903) originate from the Castello di San Giorgio, Mantua, or from the villa at Marmirolo. Many complete tiles from the set appeared on the market from unknown sources in the later 19th century. The V&A group were formerly in the collection of J.H. Fitzhenry, from whom they were given to the museum in 1903. Further examples from the group can be found in the Museo del Castello Sforzesco, Milan; the Musee Jacquemart-Andre, Paris; the Louvre; and elsewhere (see Mallet, 1981 and 1997 for fuller details of provenance and additional examples).

The pavement of Isabella d'Este's studiolo at the Castello di San Giorgio represents Francesco and Isabella's first attempt at maiolica paving at Mantua. As well as being a fashionable form of decoration, it was laid with a degree of practicality in mind, in order to suppress the mice that were nesting below the floorboards. The commission for the tiles, which were initially intended for the Gonzaga villa at Marmirolo (where further examples were laid), was likely prompted by Isabella, whose father, Duke Ercole I, had previously commissioned decorated floor tiles (see Mallet, n.d. [1997]). The paving of the studiolo itself seems, however, to have been a matter of improvisation.

These tiles may have been among those laid in Isabella d'Este's study to stop mice nesting beneath the floorboards. Intellectual, snobbish Isabella was married to Francesco Gonzaga, Marquis of Mantua. The tiles have mottoes and emblems relating to the Gonzaga family. They are typical of the current fashion for learned wit and self-promotion.

a) Bird and fuse, inscribed in French, 'True love changes not', for Ludovico, 2nd Marquis

b) Craggy island with diamond point, inscribed in Greek, 'Blameless', for Federigo I, 3rd Marquis

d) Hound muzzled and leashed, for Gianfrancesco I, 1st Marquis 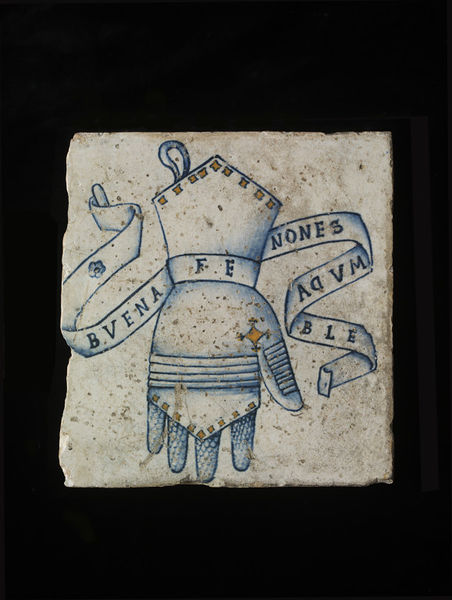