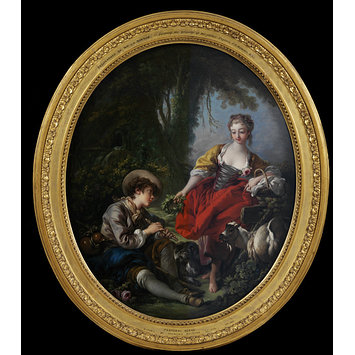 François Boucher (1703-1770) was born in Paris and probably received his first artistic training from his father who was a painter before attending the Académie de France in Rome. He may also have travelled to Naples, Venice and Bologna. Around 1731 Boucher returned to Paris where he rapidly gained the royal favour and interest from the private collectors. He was a very prolific artist and produced a wide range of artworks from pastoral paintings, porcelain and tapestry designs as well as stage designs influencing deeply the new Rococo movement.

This painting was executed by Boucher in 1763 and later exhibited at the Salon in 1765. It depicts two young shepherds on the edges of the wood and illustrates a typical Arcadian theme of love associated to music and innocent amusements. This work is a fine example of Boucher’s oeuvre pervaded with mischievous pastoral scenes which would become the hallmark of his art and eventually of the whole rococo period.

Two figures on the edges of a wood in an oval composition: a young man, seated, holds a pipe while a young girl gives him a crown of olives branch, a sheep and a dog stand beside them.

Capt. Charles S. Ricketts; his daughter Mrs Julia Anne Bonnor, by whom bequeathed to the museum in 1901.

Pastoral is a genre of painting whose subject is the idealized life of shepherds and shepherdesses set in an ideally beautiful and idyllic landscape. These scenes are reminiscent of the Arcadia, the Antique Golden Age that the Roman author Virgil (1St BC) described in the Eclogues and were at the time illustrated on the Roman wall paintings. The pastoral was reborn during the Renaissance, especially in Venice, in the oeuvre of such painters as Titian (ca. 1488-1576) and Giorgione (1477-1510), and gradually evolved over the centuries. In the 17th century in fact, the Arcadian themes were illustrated in the Roman school led by the painter Claude Lorrain (1604-1682) whereas a century later, Antoine Watteau (1684-1721) and his followers forged the new genre of fêtes galantes, which appears as a derivation of the pastoral. The pastoral became the hallmark of the Rococo movement in which François Boucher's (1703-1770) elegant eroticism found his true expression. This tradition, which had became an illustration of the carefree aristocratic world, died with the French revolution and was never revived although the celebration of the timeless Mediterranean world in the oeuvre of such painter as Henri Matisse (1869-1954) may be seen as a continuing interest for the theme.

The present painting is signed and dated on the fence above the goat's head although the inscription is now hardly visible. Long considered to be a 19th century pastiche after the work of the French artist François Boucher, evidences have shown that the painting was an authenitic work by the French painter and this attribution was subsequently confirmed by M. Alastair Laing.

The painting was in fact exhibited at the Salon in 1765 and appears in Diderot's review, which gives a very negative account about it.

374-1901 depicts a pastoral scene set on the edges of a wood with a young shepherd playing a pipe and a shepherdess in the act of giving him a crown of olive branches. A dog and a sheep complete the composition.

This painting may derived from an earlier composition by Boucher entitled Le Berger récompensé, 1749, the Wallace collection, London. There are several compositions of the same theme executed by Boucher in the 1740s, which recurs throughout his career: Pensent-ils aux Raisins?, 1747, Art Institute of Chicago and Le joueur de flageolet, 1746, whereabouts unknown, while especially close to our painting is A summer Pastoral (original title: La couronne accordée au berger).

The two-year gap between the execution of the painting in 1763 and its exhibition at the Salon in 1765 may be explained by a series of facts. Boucher had just been appointed ‘Premier Peintre du Roi’ in 1765 and as such was required to show as many works as possible at the Salon. Due to a recent illness, he did not have enough pictures to present and had to include slightly earliest paintings such as the present one. But the repetition of his motifs and the lack of pictorial invention in these late works was deeply condemned by the crictics.

The taste for pastoral scenes was particularly vivid in France in the first half of the 18th century and goes back to a long literary tradition that could be traced back to Honoré d’Urfé’s Astrée and the writings of Madeleine de Scudéry to Petrarch’s Bucolica and Virgil’s Eclogues and finally to the Idylls of the greek poet Theocritus. In the 18th century, Les amours pastorales de Daphnis et Chloé, published in 1718, became the favourite book of the fashionable Parisian society. The ladies strated using the pastoral fantasy as a code. For instance, if a lady was dressing in the guise of a shepherdess, she was declaring her disposition for love.

The pastoral imagery pervaded with putti, mythological figures, shepherds and shepherdesses in idyllic landscapes created by Boucher would become the hallmark of the Rococo movement, which started to wane toward the end of the 18th century. 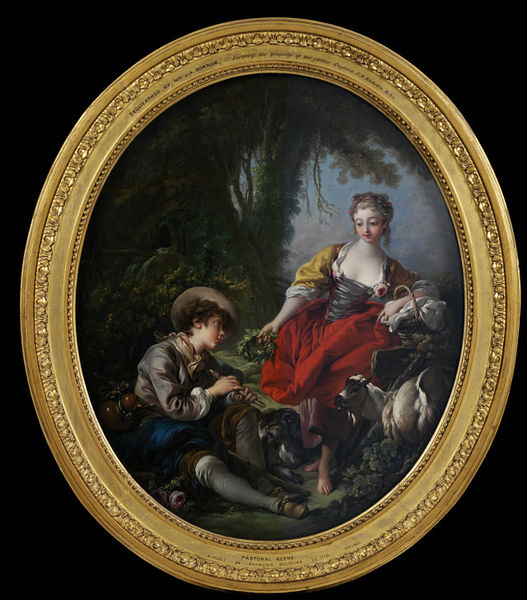