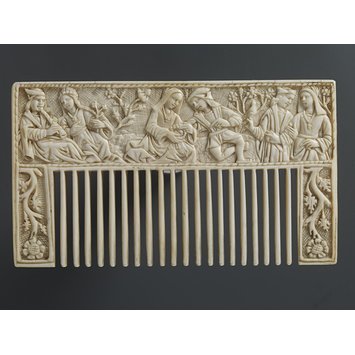 Lovers in a Garden

This is an ivory comb, made in France or Flanders in about 1500-1520, and depicts Lovers in a garden and a bridal scene.

In the period between 1300 and 1325 workshops in Paris enjoyed a thriving market for secular ivory carvings. They produced mirror-cases, combs and gravoirs (hair parters), often selling them as sets in leather dressing cases. Subjects from romance literature appeared frequently.
Ivory combs, together with mirror cases and gravoirs for parting the hair, formed an essential part of the trousse de toilette or étui (dressing case) of the typical wealthy lady or gentleman in the Gothic period.
The comb has since the Antiquity been a fundamental tool for personal grooming, used both by men and women. In the Gothic period ivory was often employed for the production of deluxe decorated combs. The Gothic comb is always carved on both faces and consists of two registers of teeth, one fine the other broader, above and below the narrative strips.
That fact makes this comb very special - as Longhurst observed - 'combs with only one row of teeth are extremely rare in the Gothic period and it is probable that this example had originally two rows of teeth'. Indeed in the Bernal sale catalogue the comb is described with two rows of teeth. If this is no erroneous description the teeth must have been carefully removed between then (1855) and 1857, when the comb was illustrated in its present state.

Ivory comb with courting scenes. The rectangular spaces above the teeth are carved in low relief with figure subjects against a cross-hatched background. On one side are three richly-dressed pairs of lovers in a garden; on the left the man plays a hautboy and the lady holds a rose branch; in the centre the lady is making a crown of roses; on the right the couple walk arm in arm, the man having a hawk on his right hand. On the other side, to the left are two musicians playing a lute and a hautboy, in the centre is the bridal couple, and behind the bride is a man passing a floral chaplet to them, and two women at the far right. At either end of the space for the teeth is a broad panel carved on both sides with wavy stems bearing leaves and flowers.

France (or Flanders, made)

French or Flemish. Previously thought to be north Italian (Milanese). 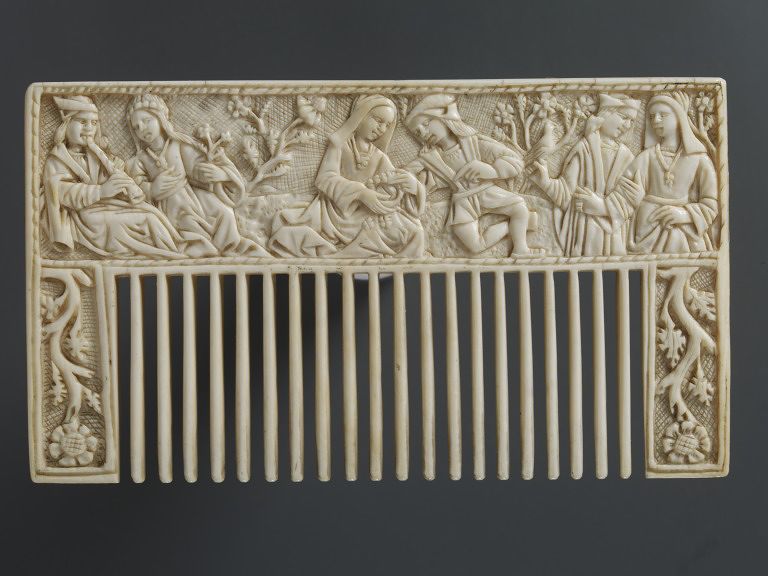