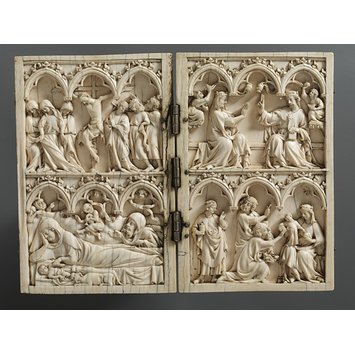 The Nativity, the Adoration of the Magi, the Crucifixion and the Coronation of the Virgin

This is an ivory diptych, made in about 1340-1370, in Paris, France.
Ivory plaques such as this were normally arranged in diptychs or triptychs. Diptychs consisted of two tablets hinged together, while triptychs were two tablets hinged on either side of a central tablet. The smaller ones were probably held in the hand and opened like a small book, while the larger ones would have stood open on a table or altar.
The devotional diptych is in many ways the object type most associated with the notion of Gothic ivory carving. The earliest examples probably date to the 1240s; these are complex, large and ambitious works that emerged, somewhat surprisingly, with no obvious precursors. The owners of ivory diptychs sometimes appear within their images. Such portraits indicate that they were special requests on the part of their commissioners, and they parallel the similar figures that appear in manuscripts and panel paintings of the period. The iconography of Gothic diptychs oscillated between two poles. The first of which is the desire to present narratives (Life of Christ and Virgin Mary) for envisaging. The second was the use of non-narrative images to form the focus of devotion.

Ivory diptych with scenes in four compartments, each surmounted by three trefoil arches. The arches are topped with cursory crockets and finials, with a moulding above. The narrative runs from left to right, bottom to top: the Nativity with the Annunciation to the Shepherd, the Adoration of the Magi, the Crucifixion, and the Glorification of the Virgin.. The relief carving is realtively deep, but none of the sculptural elements has been entirely excavated from the background.

In the Coronation scene, Christ and the Virgin are seated on a long bench; the former holds a book in His left hand and blesses with His right; the latter is in an attitude of prayer; at each side on brackets are kneeling angels bearing censers. Below is the Adoration of the Magi; the infant Christ stands on His mother's knee and receives a gift from a kneeling king.

Previously considered to be German. 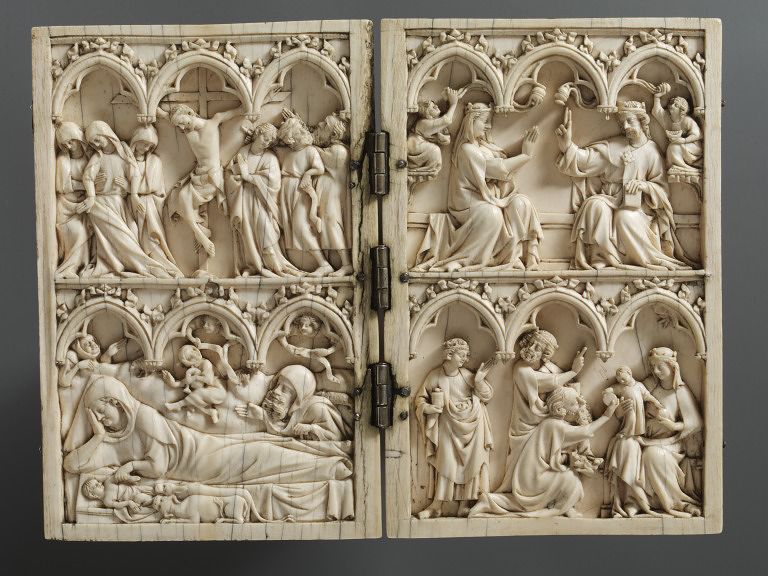