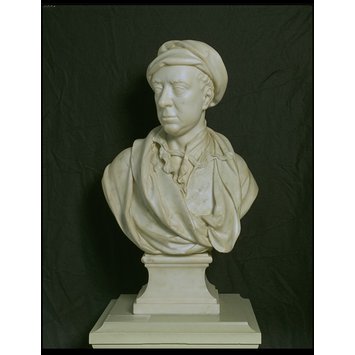 Object Type
This marble portrait bust of George Pitt (1663-1735) of Stratfield Saye, Hampshire, was made from a model executed by the sitter's son, John Pitt (born about 1706; died 1787), an amateur architect of some distinction. Another, more summary version of the bust is on the monument to George Pitt in the church at Stinsford, Dorset. The present bust was almost certainly produced as a more private memorial for the family home. The church monument was based on a design by the architect James Gibbs (1682-1754), but this bust was almost certainly made by Sir Henry Cheere (1703-1781). The finish to the surface of the marble and the seemingly casual stylishness of the dress support this attribution.

People
George Pitt was MP for a number of Dorset and Hampshire constituencies between 1694 and 1727, and owned Stratfield Saye (later the home of the Duke of Wellington). He was distantly related to William Pitt, Earl of Chatham (Pitt the Elder).

Sir Henry Cheere was one of the most successful sculptors in mid-18th-century Britain, and unlike some of his more eminent sculptor contemporaries, such as John Michael Rysbrack and Louis Fran‡ois Roubiliac, he was a native of this country. He specialised in portrait busts and tomb sculpture, and in the latter was particularly adept in the use of coloured marbles. He also employed a light, and yet at the same time highly-finished, style that was typical of the Rococo.

Materials & Making
Although this is the primary version of the bust, the existence of another on the subject's tomb indicates one aspect of sculpture production in 18th-century Britain. Sometimes more than one version would be made of a portrait bust, whether for the sitter's friends or family, or (if a celebrated subject, such as the monarch) for wider circulation. The initial model, usually in made in clay and then transferred to a full-size plaster version, could be used over and over again to reproduce copies in marble. In this case, the original model is lost, and only two marbles survive.

The sitter is shown clean-shaved, facing slightly left, wearing a loose cap and open shirt with a fluttering tie, under a draped cloak.

This is a finer version of the portrait on the monument to George Pitt at Stinsford in Dorset, and was probably executed for Enscombe House where Pitt's widow and son lived. Between August 1738 and April 1741 Pitt's widow made three paymounts, amounting to £146.8.0, to Henry Cheere. These are probably related to the bust he monument at Stinsford and perhaps some chimneypieces at Enscombe House, designed by John Pitt from 1834 onwards.

Historical significance: This is among the earliest of English Rococo busts, the decorative effect of the shirt front and the fluttering tie are particularly notable. A similar drapery style may be seen in Cheere's figure of Sir Thomas Hardy at Westminster Abbey (ca. 1740) and the bust of Sir Orlando Humphreys (died 1736) at Barking.

During the 1730s demand was increasing for marble portrait busts, intended for display in interior as well as on church monuments. Another version of this bust is on the monument to George Pitt at Stinsford, Dorset, and the marble shown here was probably carved at the same date for the family's house. The bust was said to have been 'executed from a model made after his death from recollections by his son John Pitt', a distinguished amateur architect, and shows George Pitt in the informal dress that was being used frequently by this date for both painted and sculptural portraits. [30/03/1990]
British Galleries:
George Pitt (1633-1735) is shown in informal dress. This lively image was produced after his death and is apparently based on a model made from memory by his son John Pitt. The bust was probably intended for a domestic setting. A second version was placed on George Pitt's monument in Stinsford church, Dorset [27/03/2003]

The bust was formerly known as a portrait of Matthew Prior by Roubilliac (See: Le Roy de Sainte-Croix and Esdaile). 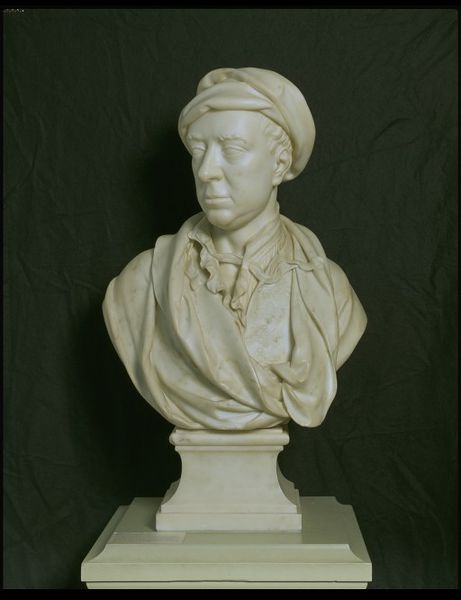