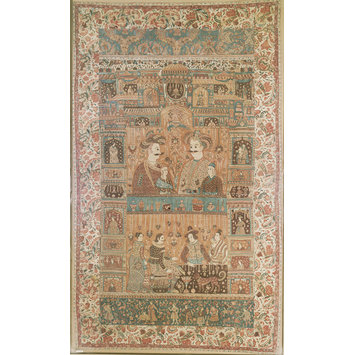 This intriguing hanging is an important early example of the complex techniques of dyeing with resists and mordants that came to be known in the West by the anglicised term 'chintz'. It is, however, unclear whether this piece was actually made under western patronage or simply uses western figures as part of its design. The outer border, which was added in the 18th century, is certainly of the type made for the western market.

The main part of the hanging is divided into two main sections. The upper part shows two men and two youths in Persian dress (although their pale complexions and blue eyes are incongruous), while the lower half shows two European, probably Dutch, men at a table, accompanied by a striped dog and two women in costumes that combine Indian and western elements. A Venetian glass sweetmeat dish is seen standing on the floor, and a European ribbed glass can be identified on the table. Other vessels are in both Chinese and Indo-Persian styles. The figures in the small niches surrounding the main part of the hanging are in Indian dress, and the architectural surroundings of the piece suggest an Indian palace.

A companion piece with similar figures is in the Metropolitan Museum, New York.

This enigmatic hanging shows two men and boys in Persian dress, with Europeans in the lower panel. Depictions of European figures on textiles made for Indian patrons were rare in the 1640s but would become more common in the following century. Two related pieces with Indian men and women survive. All were probably hung together to create a dramatic gallery of human figures.

Probably made in the Madras-Pulicat region of the Coromandel Coast, South-east India. 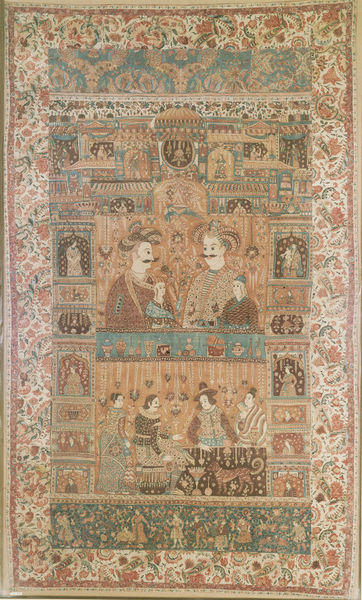