Last updated: 01 Apr 2020
Or are you looking for Search the Archives? 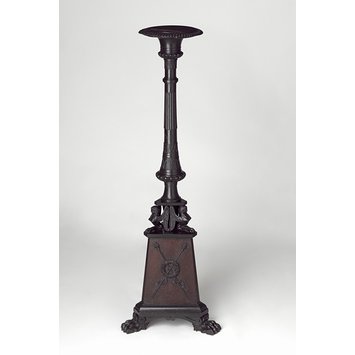 Although made of carved wood, the torchère is skilfully painted to imitate expensive materials, bronze and porphyry. It is one of a set of at least four that came from Harewood House, Yorkshire. Following a sale of some of the contents of Harewood House in 1951, the museum purchased two torchères.

It has been suggested that Thomas Chippendale the Younger, who supplied furniture to Harewood in the 1790s until at least 1804, supplied these torchères to Edward Lascelles, 1st Baron Harewood (1st Earl of Harewood from 1812). However, it has not been established who made them, or whether they were originally intended for Harewood House.

Torchère of carved wood, painted in imitation of bronze and porphyry. The top is circular with a gadrooned edge. The fluted shaft rests on a triangular base supported by three winged sphinxes. These are supported on a triangular base, the sides of which are decorated with wreaths of laurel and crossed spears. The whole rests on three lion paws.

Pine, painted in imitation of bronze and porphyry.

From Harewood House, Yorkshire. Accounts from 1796-7, intermittently up to 1804, show that Thomas Chippendale the Younger was employed by Lord Harewood at both Harewood House and Hanover Square.
A matching pair of torcheres sold from Harewood in Christie's 'attic' sale, 3 October 1988, was with Carlton Hobbs, New York, in 2010 (their ref. no. 8044). Those each stand on an additional plinth base, triangular with chamfered corners, which is porphyrized like the pedestal above the feet. Locating holes in the underside of the paws correspond to marks on the plinth where it may have been plugged and the paint then restored. Dimensions of the Carlton Hobbs torcheres (supplied by Carlton Hobbs in inches): H. with plinth c. 61½ in. (c. 156 cm); H. without plinth c.55½ in. (c. 141 cm). Width across carved feet ('end of toe to end of toe') c. 18¾ in. (c. 47.5 cm) -- which match the dimensions of this torchere to within 0.5 cm.

Torchère of carved wood, painted to resemble bronze and porphyry, decorated with classical motifs including sphinxes, laurel wreaths and crossed spears. English, ca. 1795. Possibly designed by Thomas Chippendale the Younger and made by his firm for Harewood House, Yorkshire.

PAIR OF TORCHERES
ENGLISH; about 1795
Pinewood painted in imitation of bronze and porphyry

PAIR OF STANDS
ENGLISH; about 1795
Pinewood painted in imitation of bronze and porphyry

What appears to be expensive bronze and porphyry is actually skilfully painted wood. The paint was ingeniously applied using variously sized brushes, some extremely thin, over a smooth ground layer of gesso (chalk and glue).

Several painters’ manuals were published at this period describing how to simulate costly materials such as rosewood, bronze and marble.
[01/12/2012] 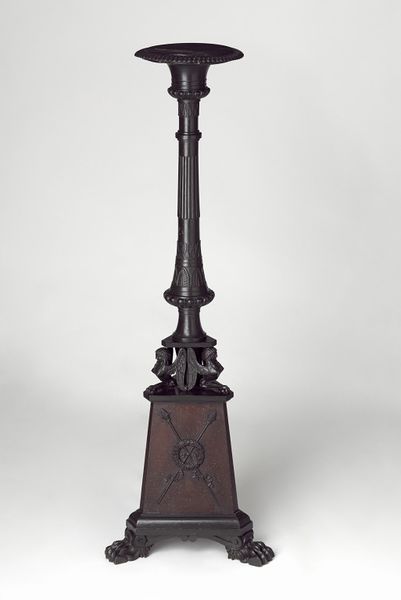