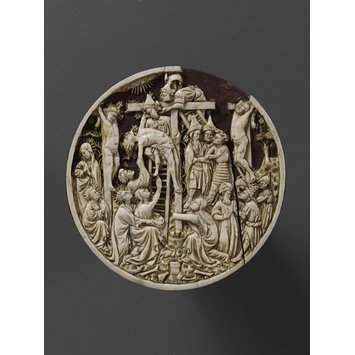 This is a miniature relief depicting the Deposition, made in France (Paris) in about 1400-1410. There are no fewer than eleven other versions of this composition known at present, most sharing all the principal components of the scene if not the round shape, and all carved in the same style, presumably emanating from one workshop. There has been general scholarly consensus in recent years that this group - and the larger total ensemble of over fifty related ivories carved in the same style, often painted - were produced in the Parisian artistic milieu of the manuscript workshops serving Jean de France, the Duc de Berry and other members of the French royal court in the first two decades of the fifteenth century.
The original context of the present V&A roundel cannot be reconstructed with certainty as the reliefs of this type were used in a variety of settings. It is possible that it formed the left leaf of a diptych pendant of unusual circular shape, with the Death of the Virgin on the right.

Ivory was used all over Europe for religious works of art. It was often combined with precious metals and usually took the form of relief panels, for book covers, portable altars and caskets. An almost unbroken tradition of ivory carving extends from the Roman and Byzantine empires until the end of the 14th century. From about 1250, Paris became the centre of production for figures and reliefs intended for private devotion.

Circular relief of ivory carved and pierced and mounted on a wood background covered with red silk, representing the Descent from the Cross or Deposition. Within a narrow raised border are represented the three crosses, on the outer of which hang the two thieves; against the central one lean two ladders, down one of which Joseph of Arimathea descends supporting the body of Our Lord, and assisted by a man who bends over the top of the other ladder. Below are Nicodemus, the Virgin supported by St. John the Evangelist, whil Mary Magdalene clasps the foot of the cross. Various other figures stand about the crosses, which are fixed in rocky ground with trees ans stars behind. Above to the left project a portion of the rayed sun, while on the right was probably a moon (now missing). 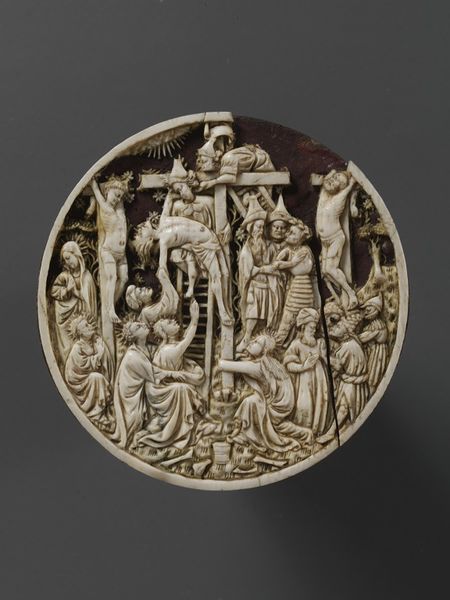