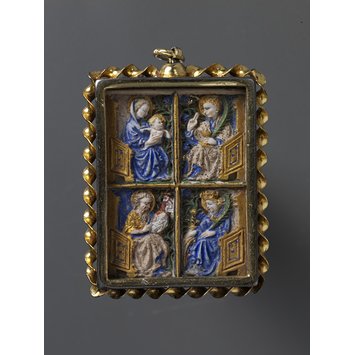 In an oblong silver-gilt frame bound by a spirally twisted band, are two thin plaques of alabaster, placed back to back, each divided into four compartments and carved with minute figures of saints, coloured and gilt. On one side, the Virgin and Child, St. John the Evangelist, St. John the Baptist, and St. Catherine and on the other, St. Christopher, St. James the Greater, St. Anthony the Hermit (?), and St. Anne.

There has been general scholarly consensus in recent years that this group - and the larger total ensemble of over fifty related ivories carved in the same style, often painted - were produced in the Parisian artistic milieu of the manuscript workshops serving Jean de France, the Duc de Berry and other members of the French royal court in the first two decades of the fifteenth century. The original context of the present V&A roundel cannot be reconstructed with certainty as the reliefs of this type were used in a variety of settings. It is possible that it formed the left leaf of a diptych pendant of unusual circular shape, with the Death of the Virgin on the right.

There are two sorts of alabaster. Calcite alabaster is very hard and was used in ancient times. This object is made of gypsum alabaster which is a fine-grained, soft and smooth stone. Although at first glance it looks a little like marble, which it was intended to imitate, it was much easier to carve due to its softness, and alabaster objects were therefore significantly cheaper to produce.

In an oblong silver-gilt frame bound by a spirally twisted band, are two thin plaques of alabaster, placed back to back, each divided into four compartments and carved with minute figures of saints, coloured and gilt; the background is pierced, and backed by gold foil. On one side, the Virgin and Child, St. John the Evangelist, St. John the Baptist, and St. Catherine; on the other, St. Christopher, St. James the Greater, a bearded figure holding a book (tentatively identified by Longhurst as St. Anthony the Hermit), and a female figure with open book and a veiled head, possibly St. Anne. The draperies of the figures are azurite and white, with gilding in places, the thrones are gilded, and the delicate foliate tendrils in the background are green; the faces are painted naturalistically. A twisted ribbon of silver-gilt decorates the outside of the frame, and a ring for suspension is fixed to the middle of the upper edge, in the shape of a shield. The reliefs are set against a background of gold foil, and may still enclose a space for relics

Alabaster, painted and gilded, set in a silver-gilt frame with rock crystal or glass.

Pendant, the Virgin and Child with saints, painted and gilded alabaster in a silver-gilt frame, France (probably Paris), ca. 1400-1410 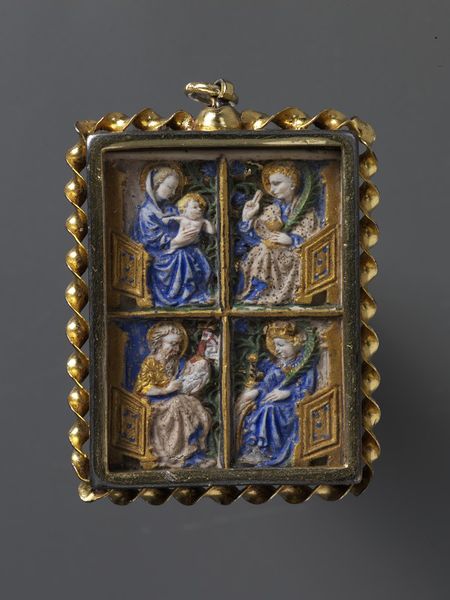