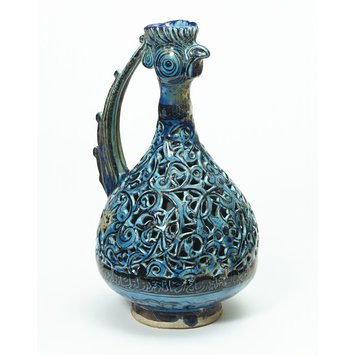 This striking fritware ewer was made in Kashan in Iran around 1200–1220, when this city was producing some of the most striking Islamic ceramics. The body was produced using an impressively accomplished double-shell technique. The plain inner shell – the container for the liquid – was formed, given a monochrome turquoise glaze, and fired in the normal manner. The perforated outer shell was then made around the turquoise centre and decorated in black. Parts of the decoration, including the inscriptions above and below the openwork area, were scratched through this black paint. The outer shell was then glazed in turquoise to match the inner shell, and the whole piece was fired again.

The mouth of the ewer was moulded in the form of a cock’s head, and the handle as tail feathers, with details added in black. Such bird- and animal-shaped elements had been a common feature of metalwork ewers since the beginning of the Islamic period, and the double-shell technique, too, may have been inspired by metalwork with openwork decoration.

Double shell ceramic ewer shaped as a rooster. Body composed of off-white paste with a transparent turquoise glaze decorated with underglaze painted in black and blue, the outer shell reticulated. Sketchily executed willow reeds decorate the area above the foot. The body of the ewer is in two shells with the outer shell composed of floral motifs and pierced. Two inscription bands which contain verses from a Persian poem encircle the lower portion of the body and the neck. The spout is in the form of rooster's head and the handle is composed of the animal's tail.

Fritware painted under a coloured glaze

Verses from a Persian poem
Persian; Naskh?; Encircling base and neck

This vessel was part of a hoard that was deliberately buried by its owner, probably a merchant who lived in Jurjan in north-east Iran, or who was passing through the city. In 1220, Jurjan was threatened by a Mongol invasion. The merchant packed the vessels in sand inside large storage jars and buried them for safekeeping. Soon afterwards, Jurjan was completely destroyed by the Mongols, and the owner never returned to recover the hoard.As a result, the vessels in this hoard survived together for almost 800 years, and in relatively good condition.The probable date of their burial also gives us a good indication of when the vessels in the hoard were made, as well as showing the wide variety of types of decoration that were used to make Iranian pottery at this time.

The double-shell technique, the glaze and the motifs, particularly the loosely painted willow reeds in the area above the foot suggest that this piece was produced in Kashan. There are two other reticulated vessels which help to determine the date. The "Macy" jug in the Metropolitan Museum of Art, New York is dated 1215 and a vessel formerly in the collection of Ali Ibrahim Pasha in Cairo, attributed to 1167 by Gaston Weit and revised to 1259 by Mehdi Bahrami. Undated ewers which have been published include an example formerly in the Sambon collection in Paris (H. Riviere, La Ceramique dans l'Art Musulman, Paris, 1913, vol. II, pl. 64), a second was exhibited in London (E. Grube, Islamic Pottery, 1976, no. 137) and others are in the Louvre, Paris (Arts de l'Islam, no. 48), in Cairo (Bahrami, pl. XIX), in the Frank Brangwyn collection in London (Ettinghausen, "Evidence for the Identification...", Ars Islamica, III [1936], fig. 32), in the Archaeological Museum of Tehran (Mikami, vol. I, pl. 178) and in a Japanese collection (Ibid., vol. II, pl. 170).

The shaping of the spout of a ewer into that of a rooster or cockerel's head, with a high-standing crest and pointed beak can be found from pre-Islamic times, on Sasanian silver vessels and in Chinese porcelains of the Tang and Song periods. A considerable amount of cockeral-headed ewers have survived, not all reticulated. Monochrome examples are rare (Cobalt and Lustre, Khalili Collection, vol. IX, no. 149) though some plain white examples exist in the Tehran Bastan Museum (Bagherzadeh, Saurat & Sato, 1981, ill. no. 123) and in the Berlin Museum fur Islamische Kunst (acc. no. I.2298, see Erdmann, 1967, no. 41). The majority, however, are decorated in lustre (C.160-1928; Collection of Prince Sadruddin Aga Khan, Ceramiques Islamiques dans les Collections Genevoises, 1981, no. 73) or painted in underglaze, usually either in black under a green glaze (David Collection, Copenhagen, acc. no. Isl.23) or with blue and white stripes (David Collection, Copenhagen acc. no. 8/1970).

This complex ewer has a perforated outer shell enclosing a solid inner flask which would have contained the liquid. A cock’s tail feathers form the handle and its head the ewer’s mouth. Inscriptions were scratched through black bands above and below the perforated design.

Fritware painted under a turquoise glaze 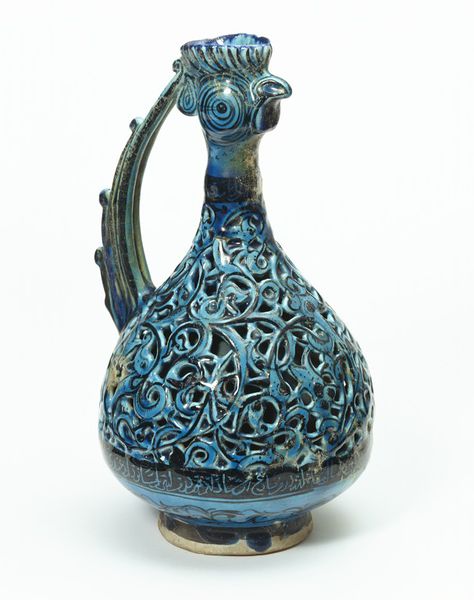