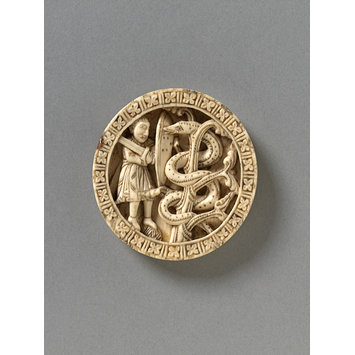 Backgammon in its various versions, has existed for at least 6000 years and has the longest recorded history of any board game. The popularity of the game in western Europe in the twelfth century may have been a result of contact with the East where it was very popular. This playing piece was produced in a Cologne workshop which specialised in the production of tablemen in the second half of the 12th century.
The subject shows a man armed with a sword and shield fighting with a serpent which winds itself in and out of the branches of a tree. It is representing Hercules coping with his 11th labour, where he battles against the serpent-dragon guarding the Apples of the Hesperides. Cycles drawn from the life of Hercules are very rare in Western medieval art of this period.

Tableman or backgammon piece made of elephant ivory. A man armed with a sword and shield fighting with a serpent which winds itself in and out of the branches of a tree. It is representing Hercules coping with his 11th labour, where he battles against the serpent-dragon guarding the Apples of the Hesperides. The border is of quatrefoils and billets.

In the Soltiykoff collection, Paris, by 1851. Soltykoff sale, lot 374, bought by Beurdeley. On loan to the museum by John Webb, from 1867. Purchsed from Webb, £5 10s.
Vivian Mann has convincingly connected th present pice to nine others. Four with scenes of the life of Samson and five with Hercules scenes, and has plausibly proposed that they all come fron the same set. The two sides, one Christian one pagan, where differentiated by colour.

These pieces are usually referred to as draughtsmen, but it now is clear that they are in fact backgammon pieces or 'tablemen'. The only medieval gamesboard to survive is for backgammon, and was found during excavations in Gloucester with a complete set of thirty pieces. Backgammon appears to have been a favourite game amongst the nobility and game sets were taken on the Crusades. Interest in this game may even have been stimulated at this period because of the contact with the East where it was very popular.

Pre-Romanesque game pieces are often decorated with simple incised patters of circles, but over 250 figurative Romanesque ivory tablemen survive, showing a range of images from zodiac signs to biblical scenes, even with representations of people playing backgammon itself. All of these date from ca.1050-1200, the most elaborate being produced from the second quarter of the twelfth century on. The figurative pieces are nearly all carved in deep sunk relief with a high border so that they can be stacked without damage. 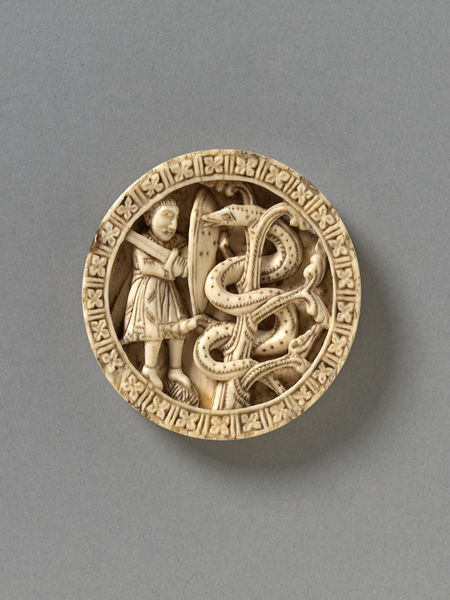