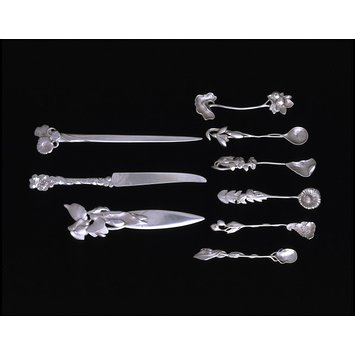 This silver paper knife, the handle in the shape of a nasturtium plant, and the entire set it belongs to, is in the prevailing Art Nouveau style. It was commissioned, and possibly executed, by Prince Bojidar Karageorgevitch, (1861-1908), a younger member of the then exiled Serbian royal family.

Karageorgevitch spent a dilettante life as a musician, writer and craftsman living in Paris. The individual pieces are inscribed variously with the monogram BK and the signature of Prince Bojidar Karageorgevitch.

Prince Bojidar lived in France for most of his life as the members of the Karađorđević dynasty were in exile after Prince Alexander Karađorđević lost the Serbian throne in 1858. Bojidar travelled a lot and went on a number of trips around the world. He served in the French Army and fought in the French campaign at Tonking and was decorated with the Cross of the Legion of Honour. To earn a living he gave singing and drawing lessons before becoming a translator and journalist.
During one of his trips abroad, he travelled extensively around India, visiting thirty eight cities. He wrote a book about his experiences called Enchanted India in which he offered an account of the Indian people, their religious rites, and other ceremonies. He also provided detailed descriptions of the Indian landscape and buildings. He also translated works of Tolstoy and Hungarian dramatist Mór Jókai.

Taking an interest in art, he visited Munich, Dresden, and Berlin and spent some months in Italy; afterwards he settled at Paris. There he regularly contributed articles to the Figaro, La Revue de Paris, the Magazine of Art (Ilya Repin, Jules Bastien-Lepage), including a biography of Marie Bashkirtseff in the Encyclopædia Britannica, 11th Edition, Vol. III. Like all journalists he was drawn to the cabarets of Montmartre, the haunt of artists, writers, poets, philosophers. It was there he met and befriended French stage actress Sarah Bernhardt, pioneer of modern dance Loïe Fuller, French poet, novelist and noted orientalist Judith Gautier, Suzanne Meyer-Zundel, Austrian composer Hugo Wolf, painter and illustrator Henri de Toulouse-Lautrec, and founder of the Ballets Russes Sergei Diaghilev. In his later years Prince Karadjordjevitch turned his attention in decoration, and executed panels and medallions for a Paris atelier as a designer, sculptor, painter and silversmith, and often spent time with Georges Lacombe, Émile Bernard, Paul Sérusier and other members of Les Nabis. Karageorgevitch's paintings, illustrations, watercolors and silversmith works were first exhibited in Belgrade in 1908.

Silver paper knife, the handle formed in the shape of a nasturtium plant.

Inscribed with the monogram BK and the signature of Prince Bojidar Karageorgevitch, (1861-1908)

Prince BK member of former reigning Serbian family. Musician, writer and craftsman, resident in Paris.
This set, in the prevailing Art Nouveau style was commissioned and possibly executed by Prince Bojidar Karageorgevitch, a younger member of the then exiled Serbian royal family. Karageorgevitch spent a dilettante life as a musician, writer and craftsman living in Paris.
Goes with M.142-149.1964. 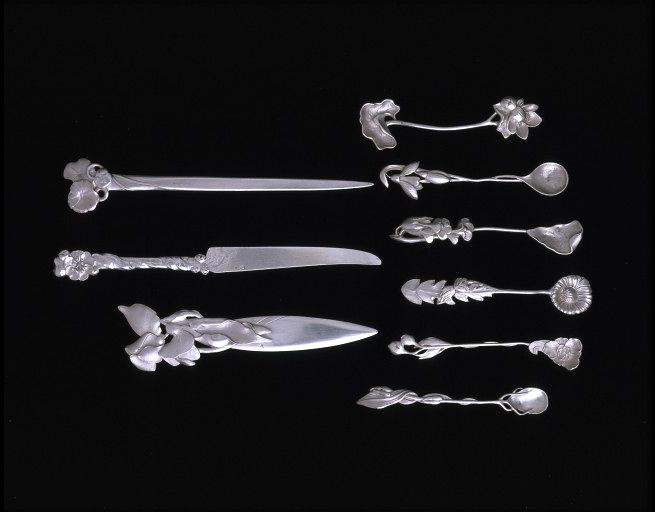