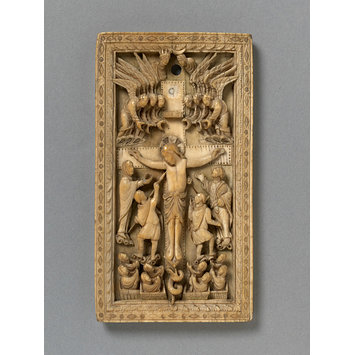 This is an ivory panel depicting the Crucifixion, made in France (Metz) in about 880-900. Ivory was used all over Europe for religious works of art. It was often combined with precious metals and usually took the form of relief panels, for book covers, portable altars and caskets. An almost unbroken tradition of ivory carving extends from the Roman and Byzantine empires until the end of the 14th century. From about 1250, Paris became the centre of production for figures and reliefs intended for private devotion. This was probably taken from a book cover.

Beneath the feet of Christ on the cross is the coiled serpent and on the cross the titulus IHS is inscribed above Christ's head. To the left are the Virgin and Longinus with a spear; to the right St. John and Stephaton offering the sponge. Above the arms of the cross are six little angel figures flying and stooping towards the cross, which is surmounted by half-length figures of the Sun and Moon. Below, eight of the dead rise shrouded from their tombs. There is a narrow inner border of leaves and an outer border of diamonds and circles.
The large circular hole is presumably post-medieval and was probably made for hanging the plaque on a wall.
The back is plain, and has been lightly cross-hatched to aid adhesion to a book-cover. At the top on the back, above the hole, are incised the letters HP.

The large circular hole is presumably post-medieval and was probably made for hanging the plaque on a wall. The back is plain, and has been lightly cross-hatched to aid adhesion to a book-cover. 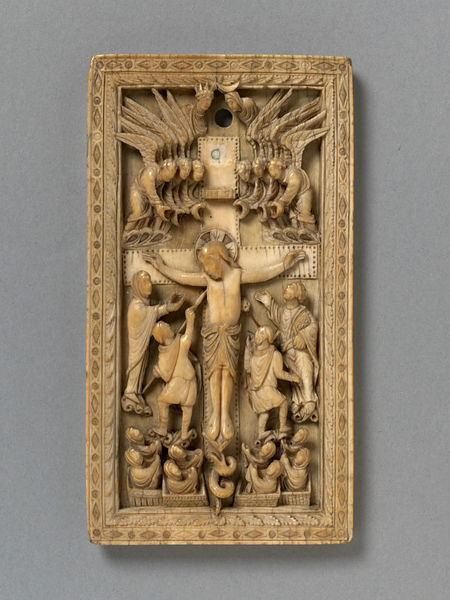