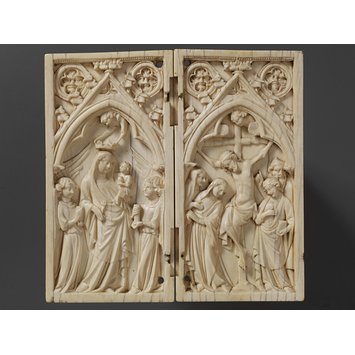 The Virgin and Child and the Crucifixion

This is an ivory diptych made in about 1350-1375 in Paris. The diptych represents the Virgin and Child, and the Crucifixion, each represented under a single trefoil arch. These two subjects are frequently combined to form diptychs which become very monotonous in style.
Diptychs of this type, juxtaposing the Virgin and Child with the Crucifixion, often beneath single trefoil arches, remained popular for much of the fourteenth century and were produced in large numbers at various levels of quality. Nevertheless, several clear sub-groups can be discerned within this general production.

Diptych with the Virgin and Child, attended by angels, and the Crucifixion. There are grotesque heads in the spandrels.
Each panel is framed by a trilobed arch supported on consoles and surmounted by a gable with large foliate crockets. In the area to either side are roundels, each with a quatrefoil moulding and the face of a green man in the centre. There is a row of beading below the upper border. The left leaf depicts the standing Virgin with Child flanked by two candle-bearing angels, the Virgin being crowned by a third angel who appears from beneath the arch. The Virgin holds a flower stem, while the Christ Child holds an orb or apple and reaches towards the Virgin's mantle with his right hand. The candlestick bases held by the angels are each pierced with dowel holes, into which the separately-carved candles would once have been set. The right leaf shows the Crucifixion, with the cross depicted as being made of rough wood. To the left is the swooning Virgin, supported from behind by a single holy woman. To the right stands St John the Evangelist, a book in his left hand, and touching his breast with his right. Behind, stands a bearded man in a pointed cap, pointing towards Christ. Above the cross, an angel appears beneath the arch, holding the sun in his right hand and the moon in his left.

Previously considered to be German from Swabia or the Upper Rhine and to date from the early 14th century. 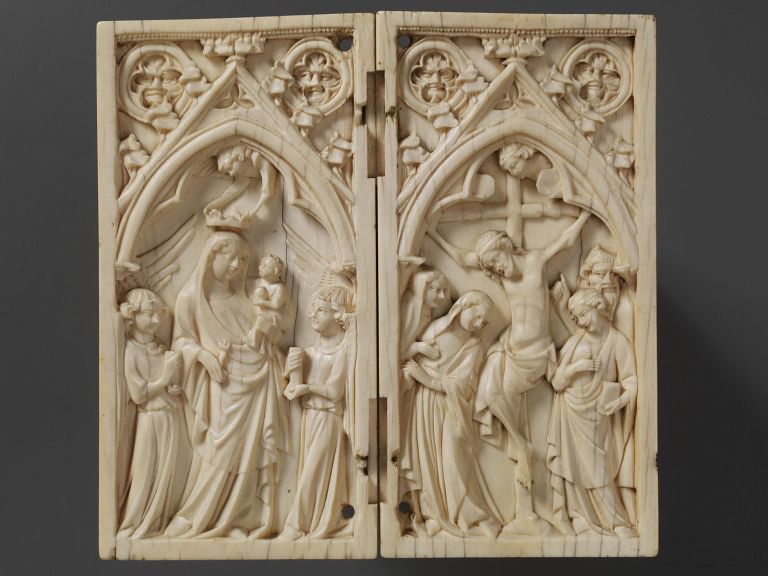