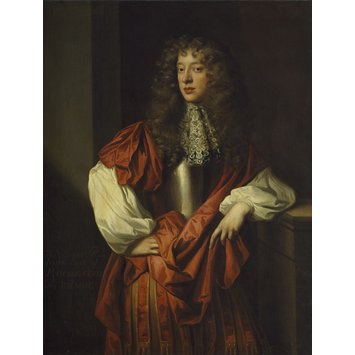 Object Type
Portraits in oil of members of the nobility were produced in great numbers and often exist in several versions. Various members of a sitter's family would want their own canvases of their famous or notorious ancestors. There are at least three versions of this painting, and a descendant of Rochester's family owned this one until 1875.

People
John Wilmot, Earl of Rochester (1647-1680) is shown here in pseudo-Roman dress, with a cuirass or steel breastplate, as he had distinguished himself by his bravery in a battle at sea. Yet his real fame was as a courtier, wit, rake, and a poet whose obscene satires and other poems could not be published openly until the end of the 20th century. A patron of other poets including John Dryden, Rochester was often dismissed from court in disgrace. His life was divided between domesticity in the country and a riotous existence at court, where he was renowned for drunkenness, vivacious conversation, and 'extravagant frolics'.

Sir Peter Lely, a Dutch artist who worked most of his life in London, was the leading portrait painter at court. He is most famous for his portraits of women at the court of Charles II.

Oil painting of John Wilmot, Second Earl of Rochester. It is a three-quarter length portrait of a clean-shaven man standing and looking towards the spectator but turning his head to the spectator's left. His right hand rests on his hip and his left on a stone pedestal. He wears a long light brown wig, a lace cravat, a cuirass, white sleeves, and a red cloak. Inscribed on the background on the left 'The Right Hon[ble]/IOHN Earl of/ROCHESTER/Visc[t] WILMOT.'

The portrait is believed to have been painted for an ancestor of Miss Warre, of Hestercomb, Taunton, to whom the picture belonged until it was sold at Christie's in 1875.

The painting in the collection of John Jones:
"Handbook of the Jones Collection in the South Kensington Museum, with Portrait and Woodcuts", published for the Committee of Council on Education by Chapman and Hall, Limited, 11, Henrietta Street. 1884.
Chapter II, "No.95, Picadilly" (pp.8-44), offers a room-by-room guide to the contents of John Jones' house at No.95, Piccadilly.
Page 16 concerns the contents of the Dining Room on the Ground Floor; "The walls were covered with pictures and miniatures. The two small Guardis (nos. 489, 490) were hung opposite the fireplace, and between them the portrait of the Earl of Rochester (No.491)." This is illustrated in Fig. 3, page 13; "Dining-Room at No. 95 Piccadilly" by H. W. Hogg / 1852. The print is of poor quality and the portrait depicted appears to be of a child rather than a grown man.

A three-quarter length portrait, in oil on canvas, of John Wilmot, Second Earl of Rochester, with an inscription. British, late 17th century. Copy after a painting by Sir Peter Lely.

British Galleries:
The Earl of Rochester (1647-1680) was a courtier, wit and notorious poet. In this portrait he is shown dressed in a fanciful version of Roman armour. Sir Peter Lely was the leading portraitist of the day. He was unrivalled in his ability to portray rich fabrics and the mood of sleepy luxury fashionable at the court of Charles II. [27/03/2003] 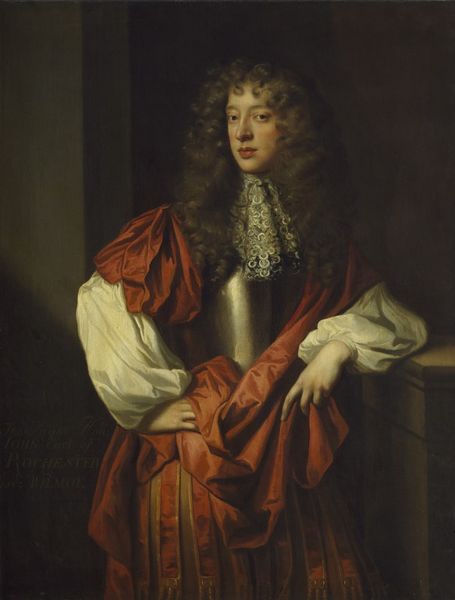