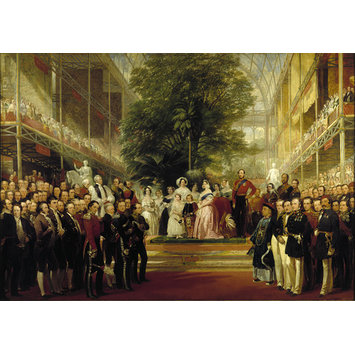 Object Type
The Victorians frequently commissioned large commemorative oil paintings of significant events, and many pictures of the Great Exhibition were made. This one was originally executed for commercial purposes, so that prints reproducing it could be made and sold. Sometimes an artist could make more money from the reproduction rights than from the sale of the original painting.

People
Henry Courtenay Selous (1803-1890) was a London painter of genre, landscape and historical and literary subjects. He was the son of the painter George Selous and was a pupil of the painter John Martin. In 1843 he won a œ200 prize at the Westminster Hall Cartoon Competition. He produced illustrations for the Art Union and illustrated many books.

Subjects Depicted
The International Exhibition of Arts and Manufactures, the Great Exhibition, was initiated by Prince Albert and housed in a vast glass structure, the Crystal Palace, erected in Hyde Park. The painting shows the Archbishop of Canterbury blessing the Exhibition. Commissioners, ministers and dignitaries surround the Royal Family. More than 25,000 people attended the opening day. The artist included Sir Henry Cole, later the first director of the Victoria and Albert Museum, in the group on the left.

The International Exhibition of Arts and Manufactures, the "Great Exhibition", was initiated by Prince Albert and housed in a vast glass structure, the "Crystal Palace", erected in Hyde Park.

Henry Courtenay Selous (1803-1890) was a London-based painter of genre, landscape, historical and literary subjects, who also worked as a panorama painter. He was the son of the painter George Selous and pupil of John Martin.

Of the many views produced of the Great Exhibition, this is one of the most impressive and, through prints made of it, also one of the best known. The painting was exhibited at no. 4, Trafalgar Square from 25th May 1852; there is an admission ticket to the exhibition in the National Art Library. The painting was described in the Art Journal in August 1852 as follows:

'Mr Selous has painted the subject of the opening of the Great Exhibition, selecting that part of the ceremony when the Archbishop of Canterbury is offering the benedictory prayer. The time could not be more judiciously chosen, as it affords the opportunity of bringing forward the illustrious personages who figured prominently on that occasion, grouped together in all the magnificence of costume and dress, but in an attitude of perfect repose, and the countenances expressive of agreeable and devout expression.'

The writer concludes: 'It will form an interesting memorial of an event that for many years to come will lose little of its attractiveness in the estimation of thousands.'

In the composition, the Royal Family is surrounded by Commissioners, Ministers and dignitaries. Individual sittings with Selous were given by many of the figures depicted; the painting functions as a large group portrait. The group of four men wearing court dress in the left foreground of the picture are, from left to right, Joseph Paxton with his hat under his arm; Charles Fox, whose firm built the Crystal Palace; the bearded Owen Jones, who designed the colour scheme of the building; and Henry Cole, the first director of the South Kensington Museum (later renamed the V&A).

The identity of the man in Chinese dress who stands in the group on the right of the painting with foreign commissioners and chairmen of juries has been subject to debate, as no official Chinese delegation attended the opening of the Great Exhibition. In a printed key to Selous's painting, published in a newspaper in 1852 (V&A museum number 329:1-1889), his name is given as Hee Sing, and a note records that he 'happened to be present on the occasion', implying that he had no official position in the opening ceremony. However, it has recently been suggested that this man can be identified as Mr Xisheng (alternative spelling Hesing), who arrived in England in 1848 onboard the first Chinese ship to have entered British waters, the Keying. A medal in the collection of the Shanghai History Museum, bearing a portrait of Xisheng, records this event with the following inscription:

'MANDARIN HESING OF THE CHINESE JUNK
THIS REMARKABLE VESSEL IS A JUNK OF THE LARGEST CLASS, AND IS THE FIRST SHIP CONSTRUCTED BY THE CHINESE WHICH HAS REACHED EUROPE, OR EVEN ROUNDED THE CAPE OF GOOD HOPE. THIS JUNK WAS PURCHASED AUGUST 1846, AT CANTON, BY A FEW ENTERPRISING ENGLISHMEN. SHE SAILED FROM HONG KONG 6TH DECEMBER 1846 ROUNDED THE CAPE 31ST MARCH 1847 ARRIVED IN ENGLAND 27TH MARCH 1848'

A medal struck in 1848 in the collection of the National Maritime Museum, London, also commemorates the arrival in England of Xisheng onboard the Keying (NMM museum number MEC 1349). On the obverse of the medal is a portrait of Xisheng and the legend 'MANDARIN HESING OF THE CHINESE JUNK'.

Documents in the Royal Archives at Windsor Castle record that Queen Victoria visited the Chinese ship on 16 May 1848, just a few weeks after its arrival in London. Xisheng was subsequently invited to the opening of the Great Exhibition, which he attended as a member of the group of foreign dignitaries. The painting shows him wearing Chinese official clothing even though he was not an official delegate of the Manchu government.

In 2010 this painting was lent to the Shanghai Expo, and following this the Shanghai Museum commissioned a full-scale copy to be made. This was painted in the UK, partly in front of the original painting in the V&A, and shipped to Shanghai in September 2011.

Oil painting of the the Great Exhibition. British, 1851-1852. Painted by Henry Courtney Selous.

British Galleries:
This famous image of the opening ceremony shows the Archbishop of Canterbury blessing the Exhibition. The Royal Family is surrounded by Commissioners, Ministers and dignitaries. More than 25,000 people attended the opening ceremony. This picture was originally painted with a view to its commercial possibilities and many prints were made of it. [27/03/2003] 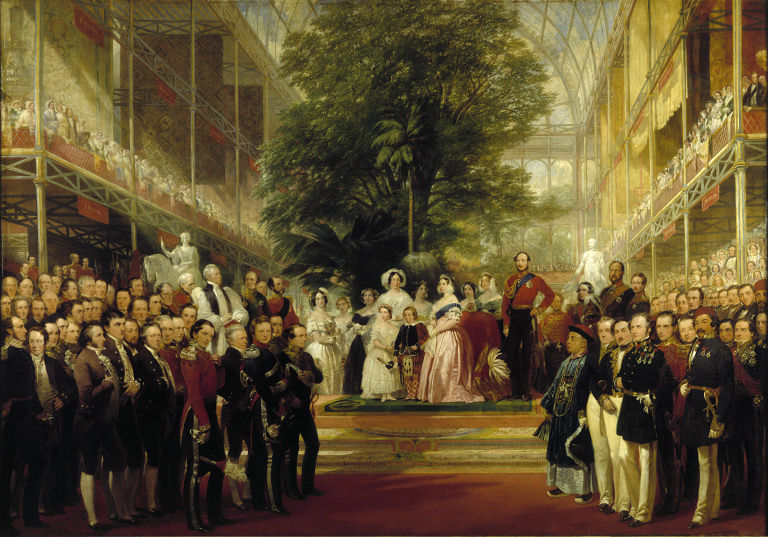