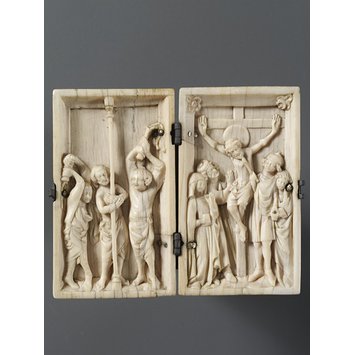 Scourging of Christ and the Crucifixion

This is an ivory diptych representing the Scourging of Christ and the Crucifixion. Such plaques as these were normally arranged in diptychs or triptychs. Diptychs consisted of two tablets hinged together, while triptychs were two tablets hinged on either side of a central tablet. The smaller ones were probably held in the hand and opened like a small book, while the larger ones would have stood open on a table or altar. This was originally thought to be German and at some point also English, but there seems no reason to view it as anything else as French (probably Paris).
The devotional diptych is in many ways the object type most associated with the notion of Gothic ivory carving. The earliest examples probably date to the 1240s; these are complex, large and ambitious works that emerged, somewhat surprisingly, with no obvious precursors. The owners of ivory diptychs sometimes appear within their images. Such portraits indicate that they were special requests on the part of their commissioners, and they parallel the similar figures that appear in manuscripts and panel paintings of the period. The iconography of Gothic diptychs oscillated between two poles. The first of which is the desire to present narratives (Life of Christ and Virgin Mary) for envisaging. The second was the use of non-narrative images to form the focus of devotion.

Diptych of Ivory carved in high relief depicting the Flagellation and the Crucifixion with the Virgin, St. John, Longinus and Stephaton. On the plain moulded border are the sun and moon. It’s a small diptych that shows a single scene on each leaf. The left shows the Flagellation, where Christ is bound by his wrists to a tall column, which is completely excavated from the background, and which runs from the lower to the upper borders of the frame. The right leaf depicts the Crucifixion. Christ is shown on the cross with an unusual plain halo behind his head, probably originally painted with a crucifixion design. To the left the Virgin stands with a book in her right hand, her left raised in grief, while behind her, Longinus looks up at Christ with his hands clasped, only the lower part of his spear visible. To the right, the large figure of Stephaton completely overshadows the much smaller figure of St John the Evangelist. Stephaton wears a Phrygian-style cap, and offers the sponge to Christ's lips. St. John raises his left hand to his face in grief, and carries a book in his right hand. Above, in the corners, were once depicted the sun and the moon emerging from the clouds.

According to the inscription on the rear of the left leaf, the diptych was once in the possession of 'Mathäus Probieff, Major, Corps Reuss, Titiofscher Jäger Regiments'; the 'Corps Reuss' in question was probably the corps commanded by Prince Heinrich XV of Reuss-Plauen in 1809 during the War of the Fifth Coalition. Nothing is known of the diptych's subsequent history until its appearance on the Paris art market in 1865; purchased from a Mr Evans in Paris in 1865, for£2 8s.

Previously attributed to Germany and England. 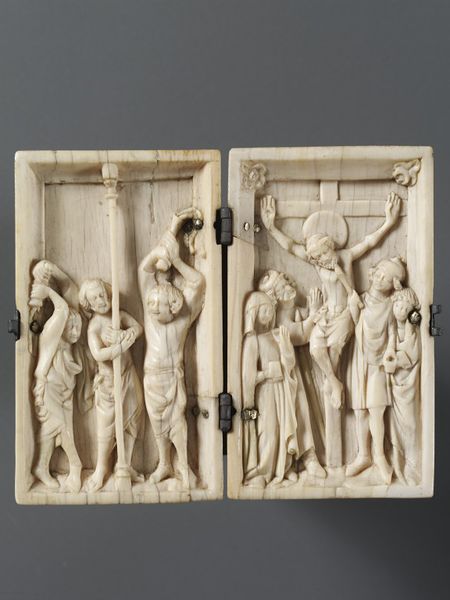