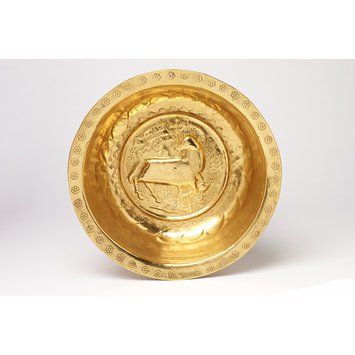 Northern European brass basins dating from the 15th century adopted a form that had been popular since medieval times, with a small diameter and deep sides. The whole of the bottom of the inside of these basins was covered with relief decoration. The subject matter usually fell into one of three categories: scenes from classical antiquity, themes from the Old or New Testaments, or allegorical figures personifying vices and virtues.

The subject depicted in this basin is the Agnus Dei (Lamb of God). The lamb was the sacrificial animal in ancient Near Eastern religious rites, including those of the Hebrews, and was adopted by early Christians as the symbol of Christ in his sacrificial role. The substitution of a ram at the sacrifice of Isaac by Abraham, an echo of the historical change from human to animal sacrifice in primitive society, was seen as a foreshadowing of the death of Christ, himself a sacrificial substitute for mankind. From its other attributes, real or imaginary, the lamb became associated with personifications of innocence, gentleness, patience and humility.

Brass dishes that were exported to Britain were sometimes used as alms dishes. Elsewhere their function was primarily secular, even if their iconography was principally religious. European paintings of domestic interiors show that they were frequently used in conjunction with lavabos (basins) or ewers, also in brass, for washing hands after a meal. Before the 17th century, when forks became customary, such equipment was essential to any dining table.

Centres of brass production in late medieval Europe tended to be situated close to plentiful sources of calamine, the carbonate of zinc that, when smelted with copper, produced brass alloy. The brass industry in northern Europe was concentrated between the Meuse and Rhine rivers, where the most important deposits of calamine lay. The main centres of production were the Attenberg and Holberg mines, both near Aachen, and the Kornelimünster and Gressenich, which lie between Givet and Liège. The two latter mines were the principal sources of supply for the town of Dinant, which was the biggest centre of brass production until the town was sacked by the Duke of Burgundy in 1466. Brass production in Nuremberg and Aachen henceforth assumed greater importance, while refugee brassworkers found their way to neighbouring towns such as Brussels, Namur and Malines.

In the centre is shown the Agnus Dei. The lower part of the side of the dish is lobed and there are stamped borders of leaves and rosettes.

Brass, hammered in relief and stamped 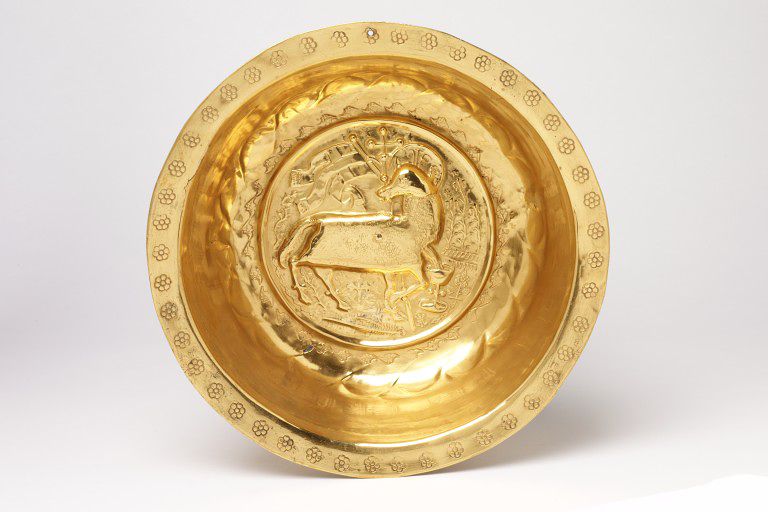