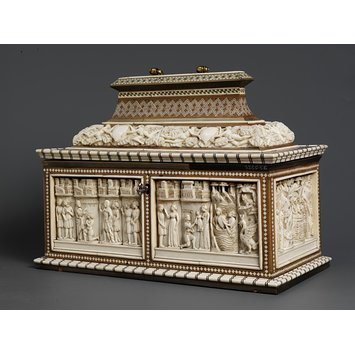 The casket is a product of the Embriachi workshop, a famous ivory-carving family who originated in Florence but had a workshop in Venice by the 1430s. There they were able to employ local workers specialising in certosina (inlay of stained woods, bone and horn), and the workshop produced items carved in bone (usually horse or ox) with wood and bone marquetry, as in this example.

As well as altarpieces, the workshop also made caskets as bridal gifts to hold jewels or documents, and these were often decorated with scenes from mythology. This example is decorated with scenes from the legend of Jason. This ancient Greek tale tells how, to win the throne of his native Iolcus, Jason led the Argonauts on a voyage to capture the Golden Fleece from Aeetes, king of Colchis. The narrative starts on the front of the casket, with the events leading up to the exile of the young Jason from Iolcus. It continues around all four sides, detailing his flight by boat and his eventual arrival at Colchis, where Aeetes refused to give up the fleece until Jason performed a set of tasks. First, as shown, he had to yoke two fire-breathing bulls to a plow and plow the field of Ares. Then he had to sow the field with dragon’s teeth, from which armed men sprang up. Jason overcame all these obstacles to claim the Golden Fleece, which is shown in the top corner of the final scene of the casket.

The carving of this casket is especially fine. The arrangement of the scenes means that the front of the casket concentrates on the preamble to the story amnd his dealings with Medea, while the rear face of the casket is given over to chivalric deeds, as the armoured Jason is shown overcoming obstacle after obstacle. If, as seems likely, the casket was intended as a nuptial gift, then the front may be characterized as dealing with the powqer and scope of the woman, while the back celebrates masculine virtue.

Casket of bone plaques with wood and bone marquetry mounted on a wooden core, decorated with six scenes from the legend of Jason. The narrative starts on the front with events leading up to the exile of the young Jason from Iolcus and continues around all four sides: his faked death and flight by boat is shown on the adjoining side, and on the back and other side the Argonauts yoke the pair of fire-breathing bulls, plough a fields, sow it with teeth from Cadmus' dragon, and overcome the warriors who spring up. The Golden Fleece, shown in the top corner of the final scene, was then claimed.
The casket has a hipped roof and a cast gilt-copper handle, with its original ring hinges. The base and lower part of the lid are decorated with applied roll mouldings formed from short pieces of bone with thin fillets of dark wood between them. The very top and bottom of the main case are decorated with applied horn strips. The narrative scenes are framed by carefully applied intarsia strips made of horn, bone and wood in a simple diamond pattern. The flat section of the lid is decorated with applied strips of intarsia in a running key pattern, and the hipped area bears intarsia patterns of interlocking squares, foreshortened battlementing and lozenge forms. A second band of figurative bone panels runs around the lower part of the lid.

Venice (city) (or Florence, made)

Bone, copper alloy, horn and intarsia on a wooden core. Plaques with wood and bone marquetry

This casket was listed in the 2 May 1791 inventory of the treasury of the Sainte-Chapelle in Paris. Bought by Alexandre Lenoir in the early 19th century, it formed part of his Musée des Monuments français; sold at the Lenoir sale, Paris, 11-16 December 1837, lot 184; purchased in 1856 (for £38).

The Embriachi workshop was known for producing religious and secular objects decorated with their trademark plaques of bone, carved in low relief. This box may have been a bridal gift, used to hold jewellery or documents.

Casket, with the Story of Jason ('The Sainte-Chapelle Casket'), bone and horn plaques, copper alloy with wood and bone marquetry mounted on a wooden core, Italy (Florence or Venice), Workshop of Baldassare Ubriachi, about 1390 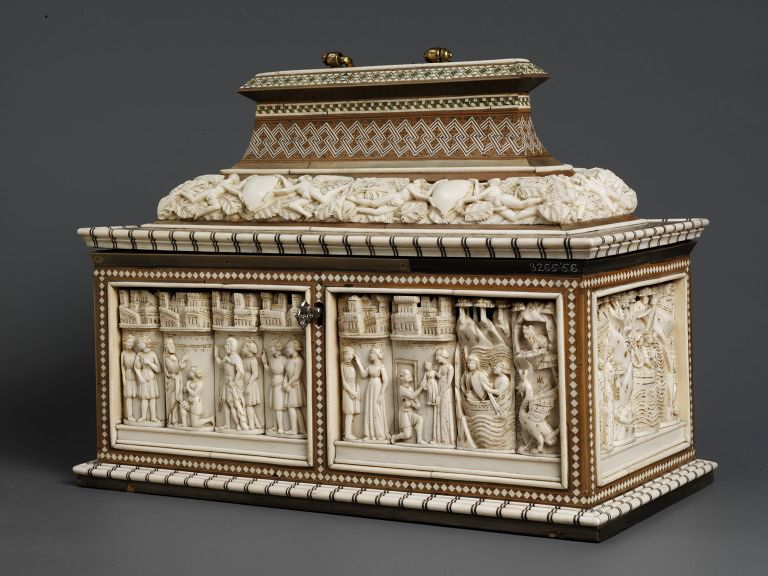