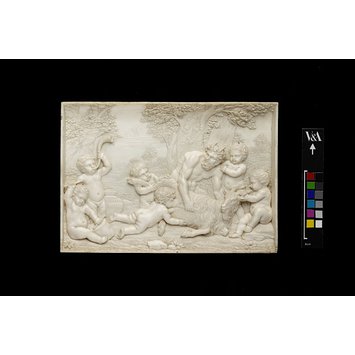 Bacchanalian infants playing with a Satyr

The monochrome colouring of material meant that these ivories could ape in miniature the ancient marbles much valued by connoisseurs and collectors of the time. This ivory is made after François du Quesnoy who was a Netherlandish sculptor, who spent most of working life in Rome and assimilated the classical style. His tender and sensuous reliefs of cupids, satyrs and small children were highly influential. See also inv.nos. 1059 to 1063-1853 for further reliefs in this group. It may have been made soon after his death in the second half of the seventeenth century Boudon-Machuel calls them pasticci, pastiches derived from in part from other compositions which Du Quesnoy executed on a larger scale in marble. Variants are also known in bronze, enamel and porcelain. The nicks on the back of the present reliefs, show that they were differentiated, and must have been made to indicate how they should be displayed at one time. The reliefs vary slightly in size from one another, but fundamentally they form a set, and must have been shown as a group together.

Relief carved in ivory depicting a group of six putti surrounding a satyr and a goat, one blowing a horn, another playing a drum. Trees and a distant cityscape are visible. Two pairs of holes are drilled into the top for fixing purposes, now filled in. Six small nicks are to be seen at the centre of the reverse of the relief. 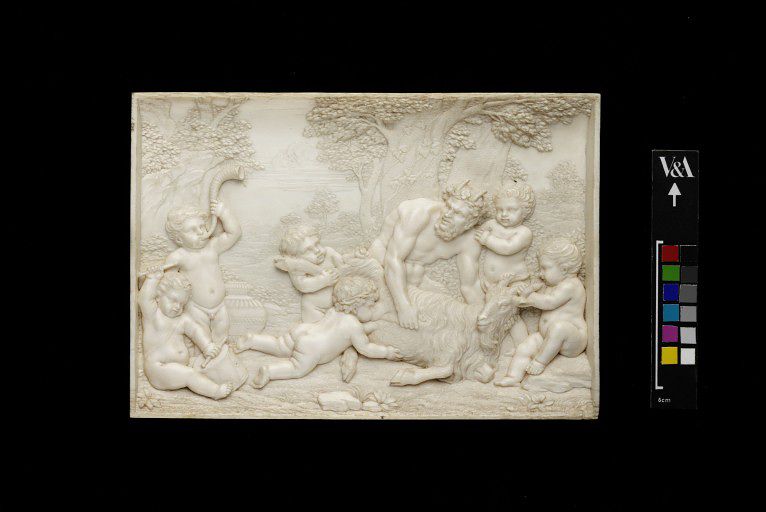