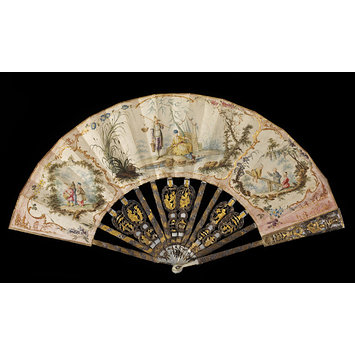 This is a particularly fine example of a Chinoiserie fan made in France in the second half of the 18th century. Chinoiserie is a French term adopted in the 19th century to describe a fashionable European decorative style that imitated and combined stylistic elements of Chinese art and design with those of Western Europe.

The fashion for Chinoiserie decoration is generally acknowledged to have reached its peak during the second half of the 18th century with the whimsical designs of Jean-Baptiste Pillement. The three vignettes that make up the illustration on this fan are based on designs by Pillement, published around 1758. In 1760 Robert Sayer incorporated Pillement’s designs into a design source book, The Ladies Amusement. Such books allowed designs to be more widely disseminated and provided a repertoire of ready-made scenes for fan painters to draw from.

Whilst making use of the popular designs of Pillement, their delicate hand-painting in watercolours meant that this would still have been considered a desirable fan of high quality. The eighteenth century saw an enormous rise in mass-production of fans with printed designs and there were concerns that copper-plate engraving would be the ruin of fan painters, but despite this a market remained for hand-painted fans with proficient and gracefully applied designs such as this.

The sticks supporting the fan leaf continue the Chinoiserie design in carved mother-of-pearl, richly decorated in yellow gold and silver foils, with scenes including pagodas and an adult couple with a small child. The sticks are known by the French term 'battoir' as their rounded, paddle shapes resemble battledore racquets or carpet beaters.

The design on the fan leaf demonstrates the tendency to incorporate ‘Chinese’ elements within settings evocative of European pastoral scenes, which were also very fashionable at the time. Another common characteristic of Chinoiserie design is European artists’ portrayal of Chinese facial features. Figures often look more European in appearance and are mainly identifiable as Chinese through their costume, which itself was often a European approximation of doubtful authenticity. Most artists at this time would have been able to access original material containing more accurate depictions of Chinese people, so it could be that this trait may have been due to preferences of the buying market. The ambiguous facial features of the figures, relaxing and playing in their coloured and patterned clothes, also makes them suggestive of the European fashion for dressing-up in ‘exotic’ garments and donning eye-catching, idiosyncratic approximations of ‘foreign costume’ as fancy-dress for masquerade balls.

Fan leaf of vellum painted in watercolours.Three vignettes make up the design, showing Chinese fishermen, Chinese children playing on a see-saw, and Chinese children making music. Each scene is set in a landscape framed by delicate rococo scrolls. The reverse is painted with a spray of pink flowers outlined with gilt. The sticks are of carved and pierced mother-of-pearl showing Chinoiserie scenes, inlaid with gilt and silver foil. The sticks that support the leaf are made from wood laminated on to the mother-of-pearl sticks. Pin of white paste.

Painted in watercolour on vellum, with carved mother-of-pearl sticks and guards, decorated with gilt and silver foil, marcasite and paste

Nominal File Reference: MA/1/C1401/16
Bought at Christies South Kensington, lot 79 4 May 1978, from the collection of Mrs Susanne Baldwin, formerly Mrs Lyman G Bournisie of Appleton and Milwaukee, USA. Her collection was sold by her daughter at Christies. The Museum ascquired five fans from the sale.

The chinoiserie scenes and decorative motifs on the fan are based on designs by Jean-Baptiste Pillement (1728-1808). Chinoiserie was a popular style of decoration for fans in the mid 18th century. Pillement's designs of the late 1750s were incorporated by Robert Sayer into a design source book, The Ladies Amusement, in 1760. Such design books provided fan painters with ready-made scenes. 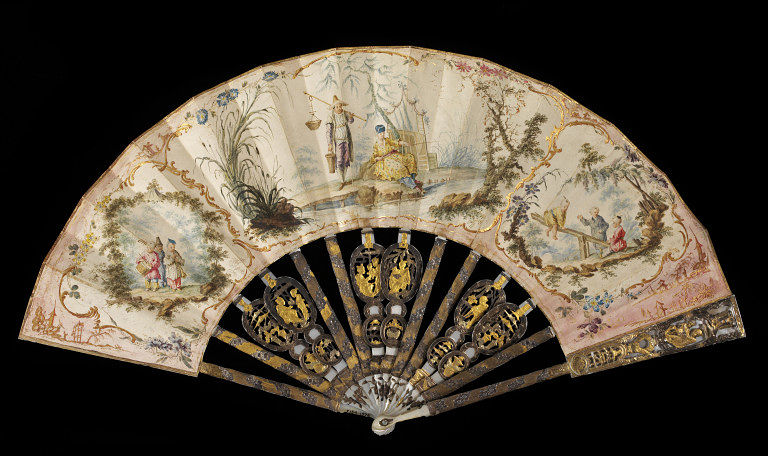