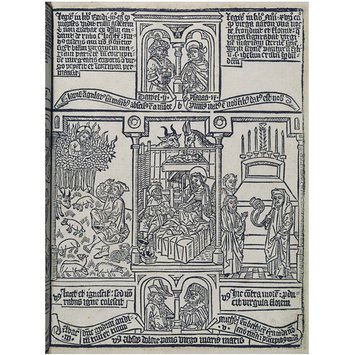 In the central horizontal compartment a scene from the life of Christ, The Nativity, is flanked on each side by a scene from the Old Testament: Moses and the Burning Bush to the left, and Aaron's Rod to the right.

In the centres of the top and bottom registers, four prophets wearing elaborate costumes and head-dresses sit beneath architectural archways (two above and two below). Speech scrolls contain quotations from the prophets. Clockwise from top left they are Daniel, Isaias, Micheas (Matthew) and Habacuc.

It glows and kindles but the bush is not consumed by fire
Titulus, below left image in central horizontal compartment

O Virgin Mary, you bear a child without the pain caused by man
Titulus, bottom centre, below prophets but referring to central image of central horizontal compartment

This is against nature: a rod bears a blossom
Titulus, below right image in central horizontal compartment

Isaias ix / To us a child is born, a son is given
In frame below prophet /
Scroll coming from top right prophet

Micheas v / Bethlehem of the land of Juda, you are not least among the princes of Juda
Scroll coming from bottom right prophet

Habacuc iii / Lord, I have heard what you said, and am afraid
Scroll coming from bottom left prophet

According to Exodus iii, 1-14, Moses saw the burning bush, and it did not burn, and he heard the Lord speaking to him from the bush. The burning bush which is not consumed prefigured the blessed Virgin bearing a child without defilement of her body. A virgin, she gave birth and remained pure
Top left

According to Numbers xvii, 1-11, the rod of Aaron burst into leaf and blossom one night. This rod prefigured the Virgin Mary who, unfertilised by male seed, was to bring forth the ever-blessed Jesus Christ
Top right 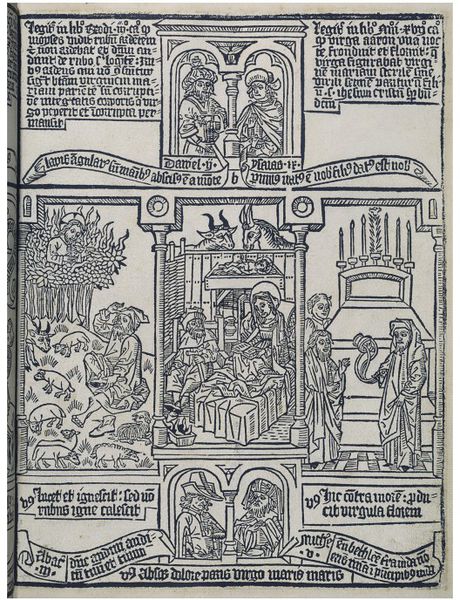