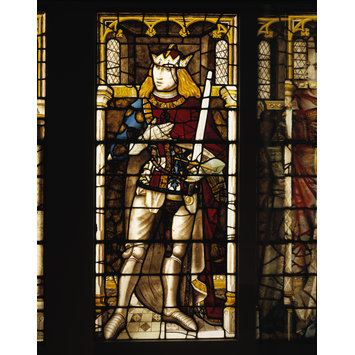 Maximilian I, Holy Roman Emperor, as Duke of Austria

This panel depicting the Holy Roman Emperor Maximilian I is one of a series including his wife Mary, Duchess of Burgundy, their son Philip the Fair and his wife Joanna, heiress to the Kingdom of Spain. They come from the Chapel of the Holy Blood in Bruges, which houses a precious relic of Christ’s blood. Maximilian probably commissioned the windows to honour his wife’s devotion to the Holy Blood and to publicise his legitimate claim to the Duchy of Burgundy.

Panel of clear and coloured glass with painted details and silver stain depicting the Maxmilian von Hapsburg as Duke of Austria, prior to becoming head of the Roman Empire. He wears the Archducal cap and the collar of the Golden Fleece. The border of his fur-lined red mantle is embroidered with two initial letters 'M' conjoined together by a true-love knot, signifying his union with Mary of Burgundy. His tight-fitting jupon displays the arms of his own house impaling those of Burgundy, in right of his wife, having overall an escutcheon of pretence, or a lion rampant sable (for Flanders) impaling argent, an eagle displayed, gules (for Tyrol).

Halt Mas
Halt Mass = hold in moderation
(1930) B.Rackham, Actes du XII Congres International d'Histoire de 'Art, believes the text behind this figure to read 'Halt Mas'. However, the letters to the right of the figure's head do not appear to be 'MAS' but rather composed of O and N and something else.

The Chapel of the Holy Blood was completed in 1482. The archives of the Confraternity of the Holy Blood record several payments for glazing of this Chapel in 1483, 1496 and 1500. Unfortunately, the records do not specify for which glass or windows these payments were made. Additionally, a window with the figures of Charles V and Empress Isabel was installed in the 16th century.

In this Chapel there were 9 windows of two lights each. It is believed that 7 of the windows contained portraits and armorials of the first four Dukes of Burgundy and their wives (see list below), Mary of Burgundy and Maximilian of Hapsburg, Philip the Fair and Joanna of Aragon and, lastly, Charles the V and Isabella of Portugal.
Philip the Bold and Marguerite of Flanders
John the Fearless and Margaret of Bavaria
Philip the Good and Isabel of Portugal
Charles the Bold and Isabelle of Bourbon

In 1795 the revolutionary commissioners ordered the dismantling of the Chapel and the sale of the glass. The glass from the Chapel was sold by the municipality of Bruges to a local man for a miniscule sum who then sold them, at great profit, to an English man in the early 19th century. Drawings in the V&A, see David Thomas Powell reference, show that the glass from the Chapel (unknown if all of the glass) was in the possession of the London glass-painting firm of Watson and Bethell. Some of the glass drawn by Powell is not in the V&A's possession and their whereabouts today are not known.

In the 1802/3 account books of the Norwich glass-painter and dealer John Christoph Hampp, there are references to sums received from Watson and Bethell for purchase of imported stained glass. This could indicate their purchase of the Holy Blood glass.

The Holy Blood glass 'disappears' from the records until 1911 when it was purchased by Grosvenor Thomas, the art dealer. Thomas stated that he purchased the stained glass from a house in Kilburn, London, called 'The Grange'. The contents of this house were sold at auction in 1910 but the very detailed sale catalogue makes no reference to stained glass windows of any sort. The house was demolished in 1911. Thomas could have acquired the glass when the house was pulled down. A 1911 article by Aymer Vallance describes this glass as purchased from Kilburn Grange by Grosvenor Thomas.

Little is known of Kilburn Grange. It was built by January 1831 by Samuel Ware, architect to the Duke of Devonshire, who had designed the Burlington Arcade in Piccadilly. Ware built the house as a property speculation and seems never to have occupied it. He had a succession of tenants until 1843 when Thomas Peters, coachbuilder by royal appointment, took up permanent residency. When Ware died in 1867, Thomas Peters' son, John, bought the house outright. John died in 188? and his wife, Ada, inherited the house and contents. From the sale catalogue, it seems that the Peters family had an interest in historic furnishings. For instance, they had panelling said to have come from Christopher Wren's house in Camberwell. We can only assume that the contents, and the panelling, were the purchase and property of the Peters family and were not supplied by Samuel Ware or any of the previous, short-term, tenants.

A news report telegraphed from London to New York on 13 January 1913 states that this glass (11 panels as now in the possession of the V&A) were on their way by boat to New York. Grosvenor Thomas exhibited his stained glass collection at the Charles Gallery on Fifth Avenue in New York City. This glass was exhibited until the Autumn of 1918 when it travelled back to London and was purchased by the V&A.

This group of glass was known only as the 'Maximilian Series' until 1920 when Wilfrid Drake, business partner of Grosvenor Thomas, identified them as coming from the Chapel of the Holy Blood in Bruges.

Between 1845 and 1847, the Confraternity of the Holy Blood in Bruges commissioned a Malines glass painter, J.F. Pluys, to make replacement windows for the Chapel. It is believed that, in the absence of the original panels, he designed his windows based on 16th century watercolour drawings of the windows. These drawings are still in the possession of the Confraternity. Pluys seems to have interpreted the original scheme as being a dynastic display of the Burgundian Dukes and their Hapsburg 'successors' as he filled the last two windows with full-length portraits of Albert Archduke of Austria and and the Empress Maria Therese and her consort Francis I. These latter Hapsburgs may have had a special relationship with Bruges and the Confraternity.

J. F. Gailliard published a history of the Bruges Confraternity in 1846 and included coloured drawings of the windows.

The title 'King of the Romans' was adopted upon succession to the imperial throne but prior to the consecration and confirmation by the papacy when 'Holy Roman Emperor' would be used. This procedure was changed by Maximilian late in his reign when he negotiated with the papacy the right to be known as 'Emperor-Elect' prior to the papal ceremony.

Maximilian is reported to have said:
Whoever prepares no memorial for himself during his lifetime has none after his death and is forgotten along with the sound of the bell that tolls his passing. Thus the money I spend for the perpetuation of my memory is not lost; in fact, in such a matter to be sparing of money is to suppress my future memory (see Appelbaum, Introduction).

Woodcuts commissioned by Maximilian:
1. (1526) Triumph of Maximilian I
137 woodcuts, portrays the achievements and aspirations of Maximilian
2. (post 1519) Weisskunig
allegorical autobiography
3. (1517) Theuerdank (The Knight of Adventurous Thoughts)
Poem about Maximilian's youth and his courtship of Mary of Burgundy
4. (post 1519) Freydal
Account of the tournaments and masquerades in which Maximilian participated in in Burgundy
5. (1517) Ehrenpforte (Triumphal Arch)
2-d edifice over 10 feet high

(January 1477) Duke Charles the Bold was killed in battle. His heir was Mary but the Duchy of Burgundy was annexed by the French crown as there was no direct male heir. Mary retained, according to French law, only the Burgundian Netherlands and Franche-Comte. Mary married Maximilian by proxy within several months and he proceeded to secure the lands of the old Duchy back from the French crown. Although the Dukedom was officially lost, Mary and Maximilian's son, Philip the Fair, bore the titular honour of 'Duke of Burgundy'. Mary died in 1482 and her lands passed to Philip.
(1486) Maximilian was elected 'King of the Romans' during his father's lifetime.
(1493) Emperor Frederick III died and Maximilian succeeds to the imperial Hapsburg possessions
(1506) Death of Philip
(1519) Death of Maximilian and succession of grandson Charles V

Panel of clear and coloured glass with painted details and silver stain depicting Maximilian I, Holy Roman emperor, as Duke of Austria, from the Chapel of the Holy Blood, Bruges, probably made in Bruges, Belgium (Flanders), ca. 1500.

These panels depict Maximilian of Hapsburg and his wife Mary, Duchess of Burgundy; along with their son Philip the Fair and his wife Joanna, heiress to the Kingdom of Spain.
The Chapel of the Holy Blood houses a reliquary containing the blood of Jesus Christ. It is probable that Maximilian commissioned these windows to honour his wife's devotion to the Holy Blood and to publicise his dynastic succession to the Dukes of Burgundy.

From the Chapel of the Holy Blood, Bruges 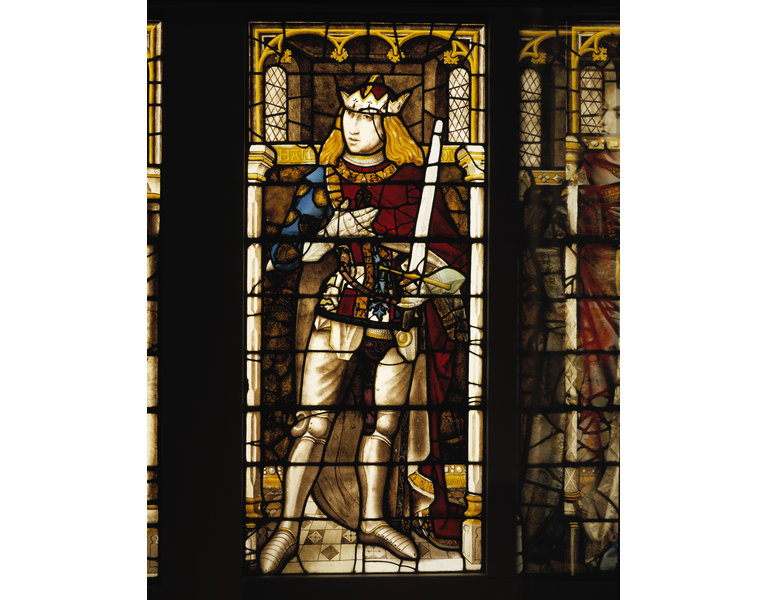