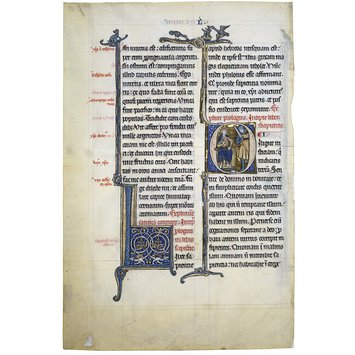 This leaf is from a large Bible that was made in several volumes. Now known as the Glazier-Rylands Bible, its format shows that it was designed to be read on a lectern. It would have been made for a religious community rather than for a scholar.

The illumination is of a high quality and was probably the work of itinerant illuminators. Where exactly this Bible was made has been disputed. Experts have suggested Cambrai, as well as Tournai and the county of Hainaut in France. But it is difficult to pinpoint a particular area, as travelling artists were brought together for specific commissions in different places.

In expensive bibles such as this one, historiated initials (decorated with a figurative scene) at important breaks in the text were normal. The scenes were often standard ones for particular parts of the text and would be instantly recognisable to the reader. The initial D on this page shows Solomon and a soldier and introduces the Book of Wisdom. Solomon, son of David, was the third king of Israel and known for his wisdom. He wrote the Book of Proverbs.

This Bible is now scattered between several locations. These include the Glazier Collection in the Pierpont Morgan Library, New York, and the John Rylands University Library in Manchester.

In illuminated manuscripts, there was usually a hierarchy of initials marking important divisions in the text. These were at this time added by specialist illuminators and rubricators, in spaces left blank by the scribe. The more important initials might be historiated with a figurative picture (istoire being the term for a story), or decorated. In expensive Bibles such as this one, historiated initials at important breaks in the text were normal. The scenes in these initials were often standard ones for particular parts of the text and would be instantly recognisable to the reader. The initial D on this page shows Solomon and a soldier and introduces the Book of Wisdom. Solomon was the third king of Israel, son of David, and known for his wisdom. He wrote the Book of Proverbs.

At this time such initials had antennae that reached into the margins, on which humorous or fantasy creatures played. They often featured elongated dragons, or grotesque heads grasping the initials between their teeth. Hybrid creatures made up of two different animals or with animal bodies and human faces were also common. Images in the margins depicted a world outside the edges of normality; sometimes the imagery acted as metaphor, and sometimes it reversed the message of the other illumination on the page. Although it seems spontaneous, there is evidence to show that even marginal imagery followed patterns. In northern France, Flanders and England, these images were especially popular towards the end of the thirteenth century, and their style was sometimes very naturalistic.

This Bible is now scattered between several repositories. They include the Glazier Collection in the Pierpont Morgan Library in New York and the John Rylands University Library in Manchester.

Leaf from a lecturn bible with four initials, three decorated and one historiated.

On the 'recto', the historiated initial O? introduces the Book of Wisdom and shows King Solomon seated on a throne, dressed in blue, green and pink, advising a soldier. The soldier wears chain mail and a yellow tunic. They are set against a gold background within the initial. The initial is pink and sits in a decorated blue square compartment with gold edge. Three blue dragons wrap around the blue and gold stems extending above and below. At the top are three blue bird chicks being fed by their parents.

The decorated initial B? is a square compartment in blue with a gold surround. Inside the initial is a foliated interlace pattern formed from the tails of two winged dragons. One dragon wraps around the blue and gold stem extending up the page. A blue dog stands at the top of the stem.

On the 'verso' is a decorated initial I? in blue with white line, terminating at the bottom in a blue head. A snake curls around the stem and on top sits a green bird. Another decorated initial Q in blue with white and pink line, inside which is a pink dragon inside with green wings against a blue background. Both initials are set in the same compartment against a pink background.

The page is divided into two columns of 26 lines of text on both recto and verso. The text is written in gothic bookhand, quadrata (textualis) in Latin. There are red highlights on the principal capital letters. The text on recto and verso includes rubrics before each initial and in the margin in a smaller (semi-quadrata?) hand. Page headers top centre are: 'recto' 'L' (blue) and 'verso' 'CANTICOR' (alternate red and blue).

The leaves are from a large multi-volume Bible decorated by a number of illuminators. The Bible is now split up and kept in nine different collections. Judith Oliver relates the work to a group of MSS produced in the area around Lille, Arras and Cambrai in northern France; she identifies the workshop, from which "three artists...migrated east into the diocese of Liège, where they illuminated BN lat. 1077 and Brussels IV-1066" 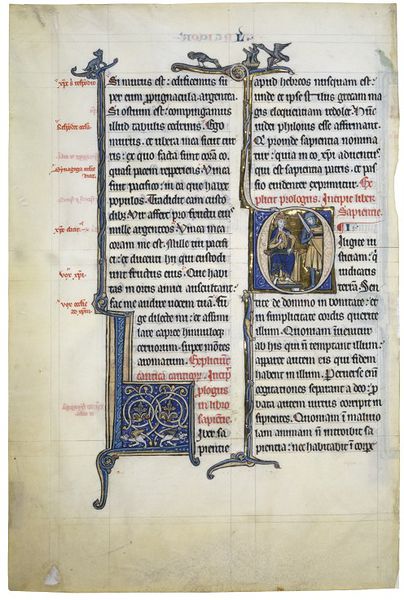