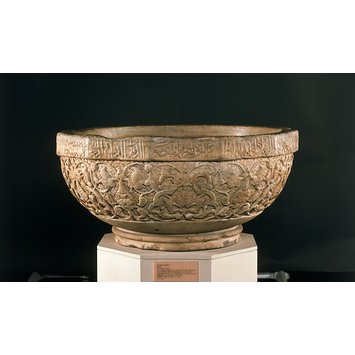 This magnificent basin was made for al-Malik al-Mansur, the governor of Hama in Syria from 1244 to 1284. It may have adorned the courtyard of a mosque he founded. The basin is hemispherical while the inscription band is octagonal. This recalls Islamic architecture, where an octagonal zone often provides the transition between a square hall and circular dome. The carving is delicately done in two levels of relief, which is characteristic of carving in stone, wood and ivory in the early years of the rule of Mamluk sultans in Egypt and Syria, from around 1250 to 1300. There is a plainer area in the decoration where the basin was probably set against a wall.

Carved marble. The Arabic inscription gives the date, as well as the name and titles of the local ruler al-Malik al-Mansur Muhammad (1244-1284) son of Muhammad, son of 'Umar, son of Shahanshah, son of Ayyub.

Syria (made)
Hama (made)

An ablutions fountain provides a constant supply of clean water so that the faithful can wash before prayer, as they are required to do. This grand basin formed the main part of such a fountain. It would have stood in the main courtyard of a mosque.

The man who commissioned the basin is named below the 12-sided rim. He was al-Malik al-Mansur, the Ayyubid prince who ruled Hama between 1244 and 1284. 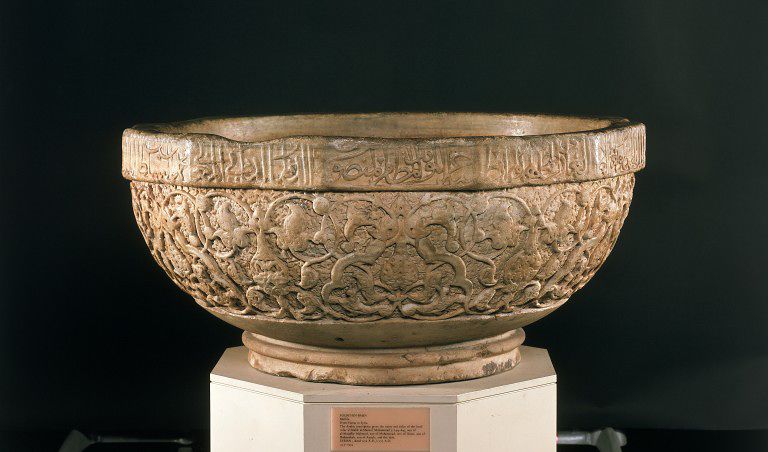