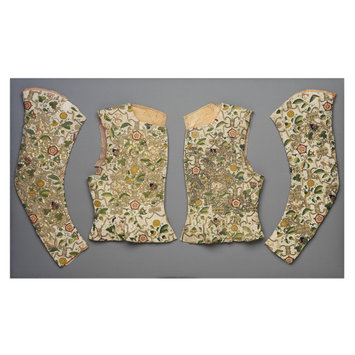 These pieces once formed part of a woman’s waistcoat and are beautiful examples of the splendour of British embroidery between 1600 and 1620. The foundation pattern in plaited braid stitch with silver-gilt thread is strapwork, a design also used in other decorative arts of this period. The leaves and flowers are filled in with a detached buttonhole stitch in a variety of coloured silks. The grapes have been worked over thick padding to give them an almost three-dimensional shape.

The waistcoat was altered to wear as part of a costume for a masque (masked ball), with the additional spangles and beads added to make the waistcoat gleam in the candlelight. The British philosopher and writer Francis Bacon (1561-1626) wrote an essay, ‘Of Masques and Triumphs’, in 1594, advising on the colours and decorations most effective for masque costume. He recommended spangles, ‘as they are of no great cost, so they are of most glory. As for rich embroidery, it is lost, and not discerned.’

Four pieces forming a woman's waistcoat made of bleached linen and embroidered with coloured silks, silver and silver-gilt filé and spangles. The pattern of the embroidery comprises a lattice of geometric strapwork in plaited braid stitch with threads. Worked inside the strapwork compartments are flowers, fruits and leaves in coloured silks in detached buttonhole stitch. The grapes are similarly worked, but raised for a three-dimensional effect.

The waistcoat was probably altered in the 1620s to wear as masque costume. The fronts were removed, shortened and new gores added, then sewn to new silk backs (not meant to be seen when worn) The waistcoat probably had a scattering of silver-gilt spangles. Many more, each topped with a glass bead, were added, filling the linen ground and almost obscuring the pattern of the embroidery.

The waistcoat has been associated with Sutton Court in Somerset for several centuries, according to information provided to the Museums, Libraries and Archives Council.

The alterations and addition of more spangles and beads may have been done to adapt the waistcoat for use as a masque costume. Sir Francis Bacon's essay, On Masques and Triumphs of 1594, makes a number of recommendations about costumes for the masque, including "oes or spangs, as they are of no great cost, so they are of most glory. As for rich embroidery, it is lost and not discerned."

Historical significance: Lavishly embroidered waistcoats were fashionable during the first two decades of the 17th century and are often seen in portraiture, usually worn with a petticoat and loose gown as formal day wear. The embroidery on this example represents a unique variation on other multi-coloured needlework designs of the period. The foundation pattern in plaited braid stitch with silver-gilt thread is in a strapwork design, a geometrical outline rather than the curving stems usually seen. The three-dimensional rendering of the grapes is a particularly rich treatment of the form. This particular waistcoat once had its linen ground completely covered with spangles, each topped with a tiny bead, an addition probably made for masque costume. 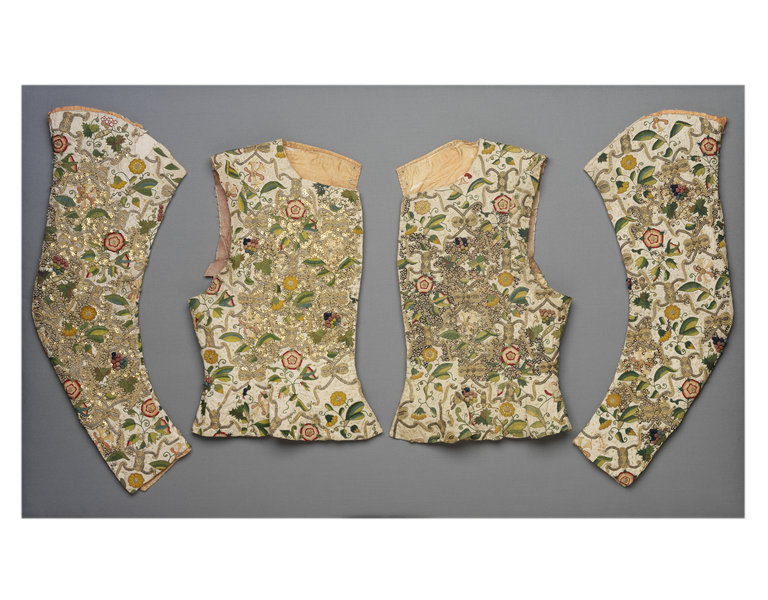