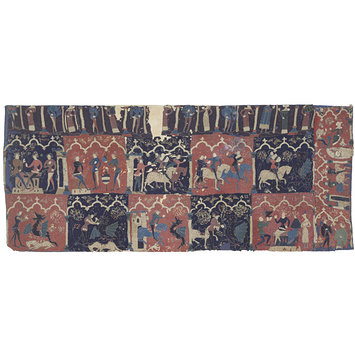 Appliqué or applied work is a simple, rapid and relatively cheap method of obtaining a decorative effect by stitching cloth pieces to a contrasting ground. Before tapestries were widely available, wall-hangings were often made in this way. Documents tell us that it was widely used for quick effect, or in less affluent areas of society.

This example is ornamented with 22 scenes from the Tristan legend. The figures are wearing contemporary fashions, the men with short fashionable doublets and shoes with long pointed toes. The style is unsophisticated but effective. The telling of a story in images was important at a time of low literacy and limited entertainment.

The woollen motifs on a contrasting woollen ground are edged with the remains of narrow gilded leather strips. Many of these hangings probably employed less-worn areas of used clothing; the recycling of expensive materials was common practice in the Middle Ages.

Wall hanging of dark blue cloth with applied figures in coloured cloths and couched gilt leather strip. Twenty-two scenes from the Tristan legend survive on this large but incomplete hanging.

Arrived in the museum from the Bock collection; no other provenance available.

Historical significance: Appliqué is a very simple and rapid method of obtaining decorative effect by stitching pieces of cloth to a contrasting ground. It was especially effective when using the well-fulled medieval cloths, whose cut edges did not readily fray and could therefore be held down easily by hem-stitching. Only a small number of examples of this decorative approach now survive, but documentary sources show that it was extremely widely used, either for quick effect or, in less affluent areas of society, to use up small pieces of cloth and discarded cloth; it was referred to as opus consutum. Documentary sources also indicate that decorative wall-hangings were made in this way before tapestry-woven hangings were widely available.

Appliqué hangings
This surviving appliqué hanging from north Germany, ornamented with scenes from the Tristan legend, shows what attractive possessions these hangings were and how well the technique lent itself to narrative. Sewn around the edges of the motifs are the remains of narrow gilded leather strips imitating couched gold thread, an effect much used on Scandinavian medieval hangings, most of which have designs of roundels containing animals. It is very likely that many of these hangings employed less worn areas of used clothing; recycling of expensive materials in this way was common practice in the Middle Ages and succeeding centuries.

The story
The tale of Tristan and Isolde is probably a Celtic romance in origin, with details incorporated from other (later) sources. The myth is not represented by one unified story with an established sequence of events, but rather existed in multiple versions across Europe. Tristan is one of the main characters, a Cornish hero and one of the Knights of the Round Table featuring in the Matter of Britain. He was the son of Blancheflor and Rivalen (in later versions Isabelle and Meliodas) and the nephew of King Mark of Cornwall, and was sent to fetch Isolde back from Ireland to wed the King. However, he and Isolde accidentally consumed a love potion while en route and fell hopelessly in love. The pair underwent numerous trials that tested their secret affair. The romantic narrative of the Tristan and Isolde love affair predated and most likely influenced the Arthurian romance of Lancelot and Guinevere. The Tristan en prose appeared in the 13th century, one of the most popular romances of its time. The work followed Tristan from the traditional legend into the realm of King Arthur where Tristan participated in the Quest for the Holy Grail. In the 15th century, Sir Thomas Malory shortened this French version into his own take found in Le Morte D'Arthur.

Judging from the dragon scenes, the hanging depicts the middle part of the Tristan story: The King of Cornwall wished to marry the sister of the King of Ireland, Isolde (or Iseult), and sent Tristan (who had at this point been proclaimed his heir) to Ireland with an imposing retinue, to sue for the maiden's hand and to escort her safely to Cornwall. On landing in Dublin, Tristan learned that a terrible dragon had taken up its station near the city, that it was devastating the country, and that the king had promised the hand of Isolde to the man who would slay the monster. Tristan immediately concluded that by killing the dragon he would have the best chance of successfully carrying out his uncle's wishes, so he sallied forth alone to attack it. The dragon had a fearsome appearance: This dragon had two furious wings, Each one upon each shoulder; With a sting in his tayl as long as a flayl, Which made him bolder and bolder. He had long claws, and in his jaws Four and forty teeth of iron; With a hide as tough as any buff Which did him round environ. In spite of the dragon's appearance, and of the volumes of fire and venom which it belched forth, Tristan encountered it bravely, and finally slew it. Then, cutting out the monster's tongue, he thrust it into his pocket, intending to produce it at the right moment. He had gone only a few steps, however, when, exhausted by his prolonged conflict, stunned by the poisonous fumes which he had inhaled, and overcome by the close contact with the dragon's tongue, he sank fainting to the ground. However, Isolde and her mother found the fainting Tristan and restored him with tender care at the palace. As soon as Tristan had quite recovered, he appeared at court, where he produced the dragon's tongue and told his adventures; but, to everyone's surprise, instead of suing for Isolde's hand for himself, he now asked it in the name of his uncle, King Mark of Cornwall.

Representation of fashions
The figures are wearing contemporary fashions: the men wear short fashionable doublets, mi-parti (two coloured) hose, and shoes with long pointed toes; the ladies wear the cote hardie, a bodice-hugging dress with wide neckline and broad hem-decoration of constrasting colour or of fur. From about 1360 the pendant strips worn at the elbow were separate streamers or tippets attached to a band bound round upper arm, similar to the female weeper at the tomb of Edward III, 1377-86.

Wool hanging with scenes from the Tristan legend, north Germany, 1370-1399