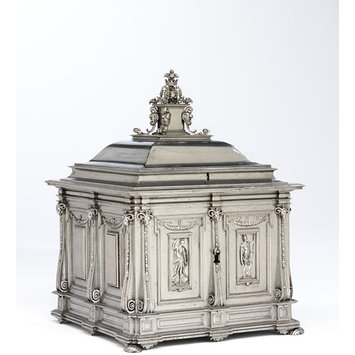 A tour de force in steel, this jewel casket was made for the Medici ruler Cosimo II, grand duke of Tuscany, who admired work in chiselled steel and employed craftsmen noted for their skill in this difficult medium. Among them were Maestro Guglielmo, 'the Frenchman' and the armourer Gasparo Mola. This casket was probably the work of Maestro Guglielmo, as he is credited with producing a similar casket in a 1642 Italian treatise on the art of metalworking. The casket has applied decoration that owes much to Florentine architecture of the late 16th century. Indeed, despite its modest size, the object has a striking monumentality. At the front are Mars and Minerva in chiselled steel; the lid is surmounted with the Medici arms, with the grand ducal crown above. A separate steel plate within the lid is also pierced with the Medici arms. One key allows access to a shallow compartment immediately below the lid, probably for gems or cameos; another allows the entire lid to be lifted. No similar work of comparable quality survives.

Steel jewel casket with applied decoration with strong elements of sixteenth century Florentine architecture; figures of Mars and Minerva on the front; hinged lid surmounted with the Medici arms and the grand ducal crown, locked with a slender steel key with wards of 3 small cylinder; the lower lock on the casket fitted with an ornate chiselled steel key with pierced foliate bow.

The maker may have been Master Guglielmo 'the Frenchman', as he is credited with producing a similar casket in a 1642 Italian treatise on the art of metalworking (Lightbown: 1967, p.86 and Colle: 1997, p. 35). Steel furnishings from Florence were greatly admired in seventeenth-century Europe. Jean-Baptiste Colbert, Minister of Finances under Louis XIV, ordered a steel cabinet ('un gabinetto d'acciaio') for his King from Florence in 1673. In a 1681 royal inventory, drawn up in Paris, the cabinet is described as of 'nine drawers, decorated on the front with four crooked [? Solomonic] columns and, in the centre, with a large niche bearing the arms of France' (cited in Colle: 1997, p. 35).

In the nineteenth century the casket was acquired by Louis Fidel Débruge Dumenil (d.1838), but its provenance remains obscure because scarcely any documentation survives on the origins of Débruge Dumenil's huge (and rapidly-assembled) collection. A few letters show his son acquired works for him in Italy, and this is probably where he purchased this casket (Arquié Bruley: 1990). The casket passed to a series of English owners after Débruge Dumenil's collection was auctioned in 1850; in 1865 the V&A (then The South Kensington Museum) attempted to acquire it at auction, but was outbid (the price rose to £170 which proved too costly). The V&A finally acquired it from Mrs N. Lansborough in 1960.

Casket of chiseled steel, with applied architectural decoration in steel, with steel figures of Mars and Minerva.

A masterwork in steel, this jewel casket was made for the Medici ruler Cosimo II, Grand Duke of Tuscany. The decoration of the casket owes much to Florentine architecture of the late 16th century. At the front are Mars and Minerva; the lid is surmounted with the Medici arms. This and two other objects with Medici connections (nos. 75 and 77) illustrate the significance given by collectors and the Museum to items with princely or royal associations.

This casket is a technical tour-de-force being made entirely of chiselled steel. The figures on the front represent Mars and Minerva, while the coat-of-arms on the lid is that of the Medici, surmounted by the Grand-ducal coronet and the lily of Florence. It was almost certainly made in the Grand-ducal workshops for Cosimo II (1609-21), who is known to have especially admired works in this technique. Stylistically it is in very much the same idiom as the parade helm and shield made by Gasparo Mola for Cosimo I, but a Master Guglielmo the Frenchman in the Duke's workshops was regarded by contemporaries as even more skilled than Mola.
M.95-1960 [1992] 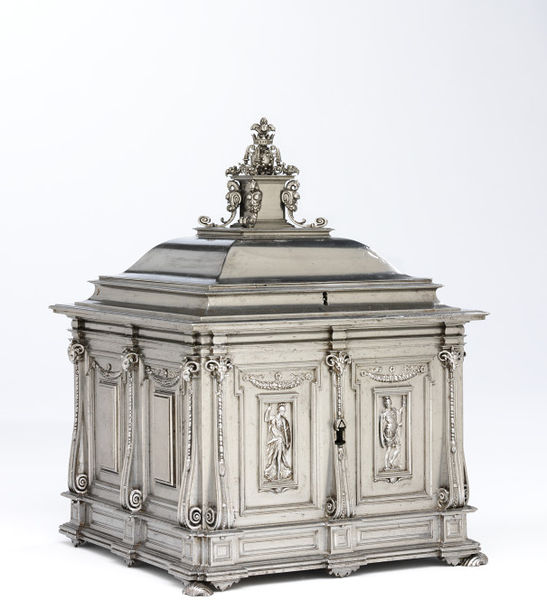