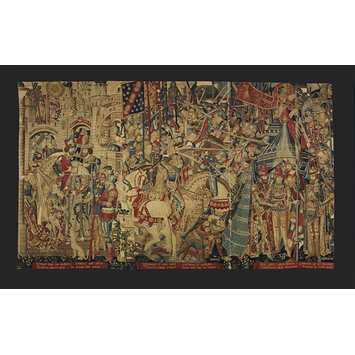 The War of Troy

The complex story of the wars between the Greeks and Trojans continues to fascinate. In the past, sets of tapestries provided an ideal medium for the depiction of the legend. Many were produced in the 15th century and depicted a version by the medieval poets, rather than the earlier account by the Greek poet Homer.

Three scenes from the story are seen on this tapestry. On the left, Queen Penthesilea comes with her Amazon warriors to join the Greeks and kneels before Priam at the gate of Troy. In the centre is a battle between the Amazons and the Greeks, and on the right we see Pyrrhus being armed. The tapestry is crammed with beautifully executed and lively scenes of battle, kings, queens, princes, warriors and horses. Contemporary costume and armour, waving banners and a military tent are depicted in exquisite detail.

It is thought that there were originally 11 tapestries, of which this example is the ninth. Some of the other tapestries survive and the original drawings are in the Louvre in Paris.

This tapestry is from a much larger original set which showed a medieval version of the history of the Trojan wars. The tapestry has been cut into three vertical sections, with the two left sections being again cut horizontally. The inscription (in French) along the top is missing. It shows three episodes in the story with a fourth on the right, now almost entirely missing. From left: Penthesilea, Queen of the Amazons, kneeling before Priam at the gate of Troy and offering her services to the Trojans; the Amazons, issued from the Dardanid Gate, engaging in the twenty-first battle with the Greeks; the young Pyrrhus, Achilles' son, in his tent being armed by Ajax Telamon with his fallen father's armour, in the presence of Agamemnon and others; the twenty-second battle with Pyrrhus joining the Greek forces in their resistance to Penthesilea (mostly missing).

Tapestry woven in wool and silk on wool warp

The tapestry was bought from the dealer Madame Duruy for £1,200, with recommendations from William Morris and Edward Burne-Jones as Art Referees.

Medallion near the top left-hand corner, containing a rayed sun with the letter 'S' encircled by the motto 'Plus quautre' in a form used by Charles VIII of France and Anne of Brittany (from 1495 he used the device of a flaming sword). This tapestry is the ninth in the series of eleven listed in the Amboise inventory of 1494, and Charles VIII paid for changes to the heraldic devices (to include his sun) which indicates that the set had previously belonged to someone else. The new emblem was expertly woven in to replace original arms.
The textiles are depicted in exquisite detail, expertly reproducing contemporary fashionable textiles such as damasks, and in particular cloth of gold with bold, swirling large-scale patterns typical of the Renaissance. The armour, dress and headwear is a strange combination of contemporary, exotic foreign (hats of Hungarian and Turkish origin) and archaic classical, all very typical for the late Medieval period when depicting Classical scenes - in particular the lionheaded shoulder armour and tabbed skirts.

Historical significance: The War of Troy tapestries consisted of eleven hangings each about 4.8 metres high and 9-10 metres long. They were inscribed with French verses explaining the scenes above and in Latin beneath; this double inscription is very unusual. The War of Troy series epitomizes the grandest large-scale Netherlandish tapestry production of the late 15th century, in both design (a dense, complex narrative style) and subject matter (a classical myth reinterpreted in terms of medieval romance). The series is also unique in that it is remarkably well documented; the merchant who owned the cartoons was Pasquier Grenier, and he supplied weavings of this design to several clients.

Original designs (petit patrons) for the Trojan War tapestries still exist; eight large drawings in the Louvre. The design may actually have been conceived for a French court patron sometime in the mid-1460s.
These designs are not based on Homer's Iliad but old medieval literary versions (for example Benoit de Sainte Maure's Roman de Troie from c. 1180). The story was a popular subject in medieval Europe - many of the north european courts had a set, of which also many claimed to be descended from the Trojans, sometimes through Aeneas. The renewed interest of the story may partly have been from the fall of Constantinople in 1453. 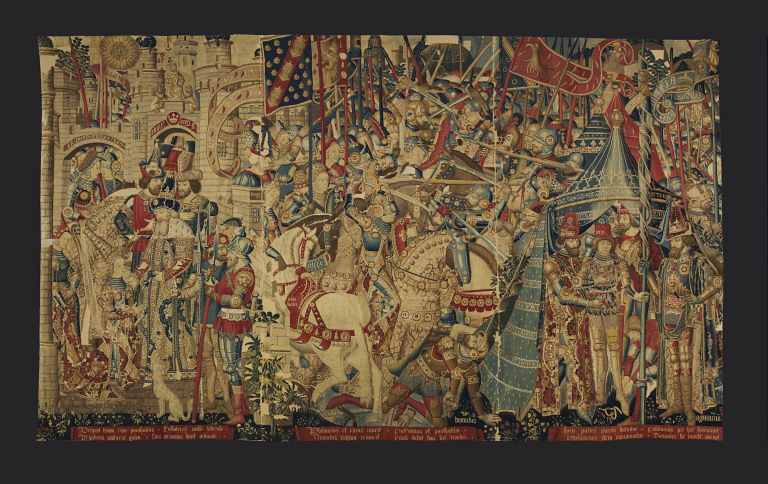