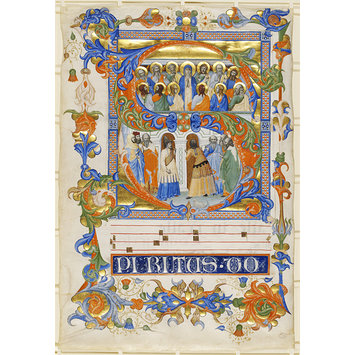 This page from a Gradual (a type of choirbook) was illuminated by Don Silvestro dei Gherarducci for the monastery of San Michele a Murano in Venice. Don Silvestro was a monk of the Camaldolese Order, and worked in the monastery of Santa Maria degli Angeli in Florence in the late 14th century. Santa Maria degli Angeli was home to a number of scribes, painters and illuminators. They worked both for their own house and for other churches and even secular customers. Don Silvestro was active as a painter and illuminator in the abbey from the 1370s. This was not a full-time activity since he was sub-prior and then prior from 1398, both of which were demanding administrative posts.

The leaf contains an initial S for the beginning of the Mass for Pentecost. In the upper register, the Virgin prays with the Apostles as the Holy Ghost descends; in the lower, the elders of all nations (carefully differentiated by their costume) wait for enlightenment. Don Silvestro may have worked as part of a team, as some of the ornament appears to have been done by others.

Leaf with half-page historiated initial S depicting the Pentecost. In the upper register, the Holy Spirit descends on the Virgin Mary and apostles; in the lower register, the devout of every nation. This initial introduces the Mass of Pentecost. In the margin there is fleshy acanthus linked by long straight stems. The panel of text [S]PIRITUS DO[MINI] has highlights delicately executed in white, rather like pen-work flourishing.
The initial has been cut out, and then re-attached, secured by strips of scrap vellum pasted to the reverse.

Made in Florence at the convent of Santa Maria degli Angeli, for San Michele a Murano in Venice. Bought before 1863 when it was transferred from the Art Museum.
A duplicate number MS.965 was assigned to this object in error and was subsequently cancelled.
Seven fragments, whose date and place of acquisition are unknown, arrived at the South Kensington Museum by an early date; four (2868, 3045, 3074 and 3087) appear in a register recording the internal transfer from the Art Museum to the Library on 6 December 1863 of a group of 241 illuminations, and a further three are recorded in a similar transfer in 1874 (431, 432 and 434). The remaining thirteen cuttings (D.217 to 228-1906) were acquired on 22 June 1906 from Bernard Quaritch for a total cost of £60. Two of them depicting prophets were lost during the Second World War (D.220-1906 and D.223-1906).

Leaf with historiated initial S showing the Pentecost, from a Gradual for the Camaldolese monastery of San Michele a Murano, Italy (Florence), 1392-1399. 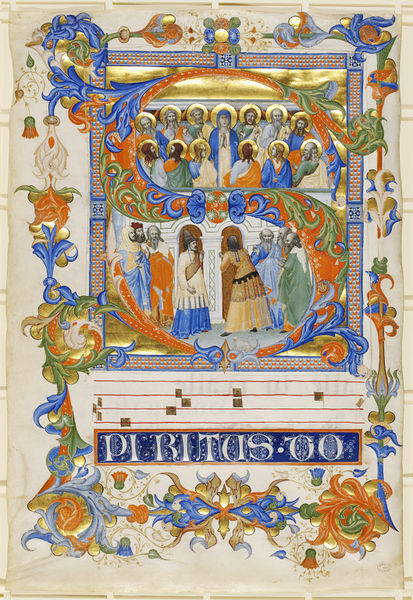