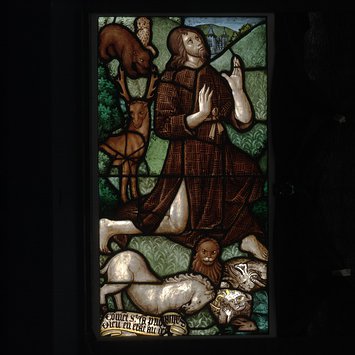 St John the Baptist praying in the wilderness

This panel and another in the Victoria and Albert Museum (Museum number: C.77-1910) probably came from the church of Saint-Etienne-des-Tonneliers in Rouen, Normandy. At the French Revolution, which began in 1789, this church was closed down and its stained-glass windows were dispersed. Some ended up in another church and others in museum collections.

Scenes from the lives of the saints were popular subjects for stained-glass windows in the Middle Ages. The cult of St John the Baptist was especially prominent in Europe after about 1450 and remained strong into the 1500s.

The subject matter for scenes from his life was taken from the Gospels, apocryphal texts and the ever-popular Golden Legend, a compilation of saints’ lives written about 1260. In the Gospel of Luke (1: 80) John is described as living in the wilderness when he grew up. In this panel we see him surrounded by wild beasts, both real and fantastical.

Panel. St. John the Baptist in the Wilderness. Animals are grouped around him as he kneels on one knee, a bear, a stag, a lion, a unicorn, and a rabbit. Below an inscription:

Probably from the church of Saint-Etienne-des-Tonneliers in Rouen, Normandy. This church was suppressed at the French Revolution and some of its glass later installed in the chuch of Saint-Romain.
The painter and glazier Jules Boulanger installed four panels from the Life of St John the Baptist in 1888. But the two early scenes showing St John taking leave of his parents and praying in the wilderness were not included. The museum acquired the two panels from the same Jules Boulanger in 1910.

Thre are two other examples of this image of St John praying in the Wilderness, in Philadelphia and in Bourg-Achard. It is clear when you compare the three that they were all based on the same cartoon, possibly from Parisian designs from about 1500. The eminent French art historian, Jean Lafond, drew comparisons between the painter of these panels, whom he termed 'The Master of the Life of St John the Baptist', and the work of the Netherlandish glass painter Arnoult de Nimegue (Arnold of Nijmegen) who was working in Rouen in the early 16th century.

Panel of clear and coloured glass with painted details and yellow (silver) stain. Depicting St. John in the Wilderness. French, probably from a church in Rouen, c.1510.

TWO SCENES FROM THE LIFE OF SAINT JOHN THE BAPTIST

The young St John the Baptist is seen bidding farewell to his parents, Zachariah and Elizabeth, in the panel on the left. On the right panel the saint and prophet is shown praying in the wilderness, surrounded by wild animals. The panels come from a window dedicated to the Life of St John the Baptist, probably in the church of Saint-Etienne-des-Tonneliers in Rouen. Several other churches in Normandy contain scenes from the life of the saint in a similar style and appearing to draw on the same cartoons, so that they are all now attributed to the so-called Master of the Life of St John the Baptist. In the panels displayed here there are a number of repairs and infills, including - most noticeably - the medieval stopgaps of devils in the bottom right corner of the scene of St John praying. 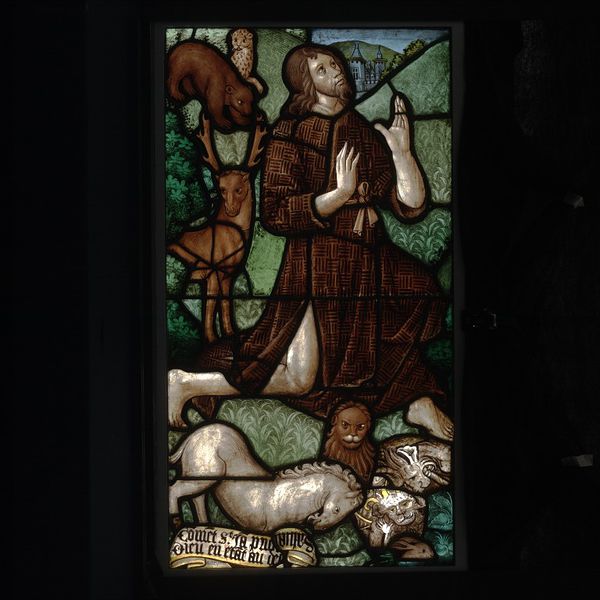