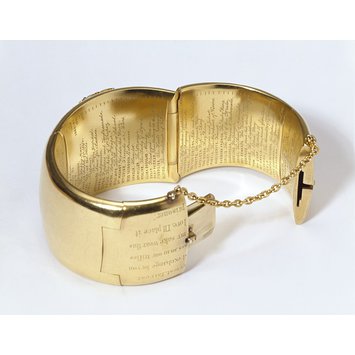 This gold bangle was given to the actress Kate Terry by her fiancé Arthur Lewis in 1867, to mark her retirement from the stage before their marriage. Kate Terry (1844-1924) was the eldest daughter of the actors Ben Terry and Sarah Ballard, and all her brothers and sisters went on the stage from an early age, her most famous sister being Henry Irving's leading lady, Ellen Terry. Kate began her stage career aged eight, as Prince Arthur in Charles Kean's production of King John and stayed in Kean's company until he retired, playing Cordelia to his King Lear when she was 14.

The bangle, which contains a locket compartment, is engraved with a quote from Posthumus's speech to Imogen (Cymbeline, Act I) on the outer surface ('It is a manacle of love; I'll place it upon this fairest prisoner"). On the inner surface is engraved a list of all Kate Terry's roles, the play titles and their dates. The lid of the locket compartment is decorated with the intertwined initials of Terry and Lewis in diamonds, set within a green-enamelled laurel leaf wreath garland. The lid opens to reveal a photograph of Kate Terry and the inscription: ‘To Kate Terry on her retirement from the stage Oct 5th 1867. From him for whom she leaves it.’ The couple married on 18 October.

The bangle remained in the family until Kate Terry's grandson, the actor Sir John Gielgud, gave it to the actress Irene Worth.

Gold bangle with an enamelled and diamond-set laurel wreath encircling a locket compartment with diamond-set monogrammed lid. The diamonds are all set in gold. The lid opens to reveal a painted photograph of the actress Kate Terry, under glass, and a dedication to Kate Terry from her husband, with the date of presentation, 5 October 1867. The portrait is backed with a piece of card carefully cut to show the address 63A Baker Street. Kelly’s Directory reveals that in 1867 this was the address of Window & Bridge, Photographers. The bangle is made in five curving hollow sections which are joined with concealed hinges. At the back is a catch and safety chain, with the engraved 'manacle of love' quote from Cymbeline spoken by Posthumus to Imogen, his wife. On the inner surface of the bangle is an engraved list of the roles Kate Terry played, and the titles of the plays.

Gold and painted enamel, with diamonds

'And sweetest, fairest, As I my poor self did exchange of you To your so infinite loss, so in our trifles I shall win of you; for my sake wear this It is a manacle of love. I'll place it upon this fairest prisoner.'
At the back of the bangle, on the outside surface; engraving

A long list of all the stage roles played by Kate Terry, with the titles and dates of the plays.
On the inner surface of the bangle; engraved; 1867

TO KATE TERRY ON HER RETIREMENT from the Stage OCT 5th 1867 From him FOR WHOM SHE LEAVES IT.
On the inside of the locket compartment lid; engraved

This bracelet was commissioned by Arthur Lewis for his 23-year old fiancee Kate Terry (1844-1924) and presented to her by him in her dressing room at the Prince's Theatre Manchester on 5 October 1867 after her performance as Marie de Fontangers in Plot and Passion. It was made to mark her retirement from the stage before her marriage, and is engraved with the quote from Posthumus's speech to Imogen: 'It is a manacle of love; I'll place it upon this fairest prisoner' (Cymbeline, Act 1) on the outer surface, and a list of all Kate Terry's roles, the plays and dates, on the inside. Within the green-enamelled laurel leaf garland are their intertwined initials set with diamonds. This is the lid to the locket compartment, on which is engraved Lewis's dedication to his wife, and the date.

It was given to Irene Worth by John Gielgud, who was the grandson of Kate Terry. The bracelet had a letter of the provenance attached, with the handwritten note: 'Upon my death I wish this bracelet to go to the Theatre Museum - London - England. Covent Garden. Irene Worth. 17 Feb 1989.'

Gold bangle with an enamelled and diamond-set wreath encircling a locket compartment with diamond-set monogrammed lid within which is a painted portrait of the actress Kate Terry (1844-1924). Presented to Kate Terry by Arthur Lewis on her retirement from the stage, 5 October 1867

This piece is not hallmarked, which is not unusual for a bangle of this date. It was probably made in London because it is in keeping with similar pieces of this date, and would probably have been specially commisioned so that all Kate Terry's roles could be engraved inside. 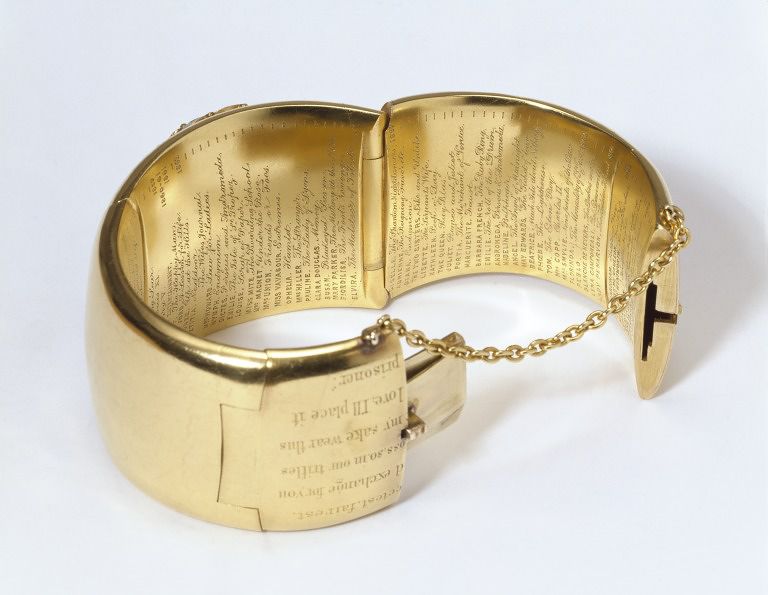