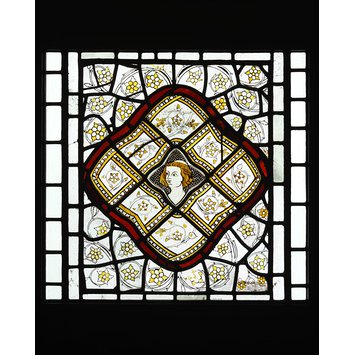 This grisaille panel is composed of clear panes of glass painted in black/brown pigment with an interconnecting pattern of stylised foliage on long stems. (‘Grisaille’ is a term used for panels of clear glass with simple decoration painted in brown/black pigment, and often also in silver (yellow) stain.). Each pane has borders painted with a silver compound that, once fired in the kiln, produces a yellow/orange colour that sinks into the clear glass. This technique is known as 'silver stain', hence the term 'stained glass'.

The interconnecting foliage and stems, together with the yellow borders that join the quarries (irregularly-shaped panes) in a lattice-like structure, show that the glazier conceived of the panel as part of a unified whole. Later in the medieval period and especially after the Reformation, grisaille windows were often composed of pieces of glass painted with single images that were not connected to one another. Such quarries were probably mass-produced and came from stocks in the glaziers' workshops, whereas these would indicate a specific commission.

It has only fairly recently been thought that this panel (and also museum number Circ.95-1930 in the V&A) and five others, now in France and in the USA, came from the abbey church of Saint-Denis in Paris. Like many other religious institutions in France, Saint-Denis was closed by the French Revolutionary government in the 1790s. The stained-glass windows in these institutions were removed. Those that survived were scattered, and some eventually ended up in private or museum collections.
The panels came from the chapel of St Louis, off the north aisle of the church, which was one of several chapels added on this side of the nave between 1320 and 1324. The chapel of St Louis was dedicated to the former Louis IX, who ruled France from 1226 until his death in 1270. Miracles occurred after his death, which led to his canonisation in 1297.

A tonsured male head set within a small central quatrefoil, diapered with small circles scratched out from the black background. This is inset in a larger quatrefoil banded by red flashed glass and enclosing quarries painted with small flowers and foliage from which a small feur-de-lys sprouts. Each quarry banded by bulging and straight strapwork of two patterns, one with dots and one with flowers. Outside of this larger quatrefoil the pattern of quarries with flowers, foliage and fleur-de-lys continues but without the strapwork.

It has only fairly recently been thought that the surviving 14th century grisaille glass in the V&A, in Paris, in the Champs-sur-Marne and in the Cloisters (6 panels) originated from the royal abbey of Saint-Denis in Paris. We believe that it came from the chapel of St Louis off the north aisle in the church. There is another chapel, an earlier one, dedicated to St Louis in the Choir. This latter chapel had historiated (figurative) stained glass.

It has been possible to piece together a rough sketch on the possible history and movements of this glass.
The abbey church, including the choir where the first chapel dedicated to St Louis is, was completed in 1281. The windows here were filled with figurative glass. Between 1320 and 1324 chapels were added to the north side of the nave and another chapel was dedicated (third chapel from west end) to St Louis. There is no mention in the accounts of the glazing of these new chapels.
Saint-Denis was secularised by the revolutionary government in 1792 and by October 1793 the royal tombs had been desecrated. In 1794 the authorities wanted to strip the lead from the roof and from the glass windows. They were prevented from doing so by the Temporary Commission of the Arts and at that time Alexandre Lenoir was appointed to oversee the removal of the tombs and other items. His assistant made sketches of the interior. From 1795 onwards there are clues in the surviving accounts that glass was being removed from Saint-Denis.

Normally we rely heavily on Alexandre Lenoir's accounts on what glass he removed from the Paris churches and put on display in the Musée des monuments francais or in storage and then what he returned to various churches after the exhibition closed but on the grisaille glass his information is non-existent. For Saint-Denis glass we know that in 1818 after the closure of the Musée he says that the glass in the 14th century room, most of which was from Saint-Denis, was put in storage.

About 1850 Just Gustave Lisch, a young architect, made drawings of stained glass, including that of the grisaille panel from this group in the Cluny museum. His drawing was labelled 'St Denis'. It is likely that these drawings were done when the panels were in the studio of the glass restorers Henry and Alfrend Gerente. This is the strongest evidence we have that the glass came from Saint-Denis.

Panel of stained glass. A tonsured male head admist foliated grisaille quarries. Originally from the Chapel of St. Louis in the north nave of the abbey church of Saint-Denis. French, c.1320-4.
STG

This panel, together with another in the V&A displayed alongside, and others now in New York, Paris and Champs-sur-Marne, came originally from the chapel of St Louis off the north aisle of the abbey church of Saint-Denis, north of Paris.

Originally from the Chapel of St. Louis in the north nave of the abbey church of Saint-Denis. 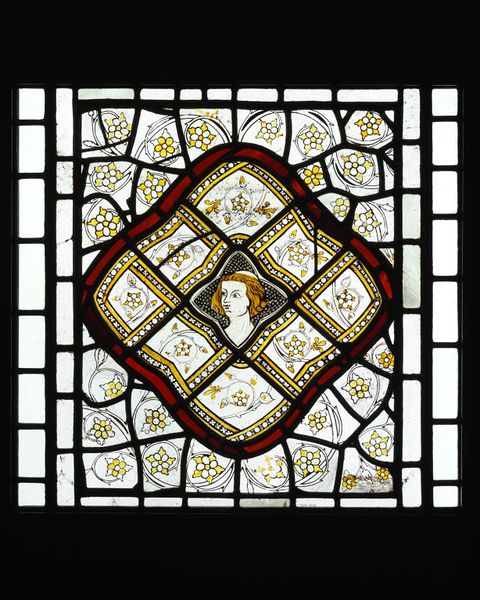