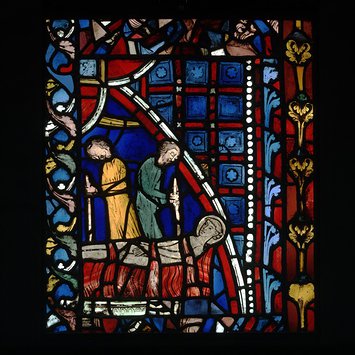 Saint Vincent burnt on the rack

The abbey church of Saint-Germain-des-Prés in Paris was originally dedicated to St Vincent of Saragossa, a deacon of the church in the Spanish town of Zaragoza (Saragossa). Tradition holds that he was martyred during the persecutions of the Roman emperor Diocletian (reigned 284–311).

According to the Golden Legend, a compilation of the lives of saints written about the time that the windows were made, Vincent and his bishop were brought before the Roman governor Dacian. At this time it was illegal to practise Christianity, and Vincent was charged with treason against the state. He refused to recant his faith, so Dacian ordered his soldiers to torture him. Vincent was tied to a rack and the soldiers drove iron hooks into his sides, so that the blood spurted and his entrails hung out from his body. Dacian subjected him to other tortures until at last the saint died. Here we see the soldiers with their hooks. The entrails are visible at the bottom of the panel.

Gregory, chronicler of the early Frankish kingdom and Bishop of Tours about 540-94, records that King Childebert (reigned 511-558) founded the abbey at the instigation of Germanus, Bishop of Paris. Childebert and his brother Clothar were campaigning in Spain against the Visigoths and laid siege to Saragossa. The citizens sought divine assistance by fasting, flagellation and processing through the streets holding the tunic of St Vincent. Childebert was so impressed that he spared the city.

Gregory does not record that Childebert was given the tunic of St Vincent, but a later account relates that the citizens of Saragossa gave Childebert the tunic in exchange for lifting the siege. This was recorded in a 10th-century sermon for the feast of St Vincent in the church. Germanus was able to persuade the king to finance the building of an abbey dedicated to St Vincent, which was completed in 558. Childebert died that year and was buried there. It was the burial place of the Merovingian kings until the death of Dagobert in 638/9, who chose to be buried in his foundation of Saint-Denis, near Paris.

In 1215 the abbey church received part of St Vincent’s jawbone, a gift from the future king, Louis VIII.

Window (two lights). The Martyrdom of St. Vincent. The inner border to the right and the diaper (set at right-angles instead of diagonally) are from a window in the St. Germain-des-Près.
The background is tessellated, horizontally and vertically, with squares inscribing six-petalled flowers reserved in a frame of hatchings.

There are other panels from Saint-Germain-des-Prés in the Metropolitan Museum (New York), Walters Art Gallery (Baltimore) and in Wilton Parish Church, Wiltshire, Winchester College, Winchester.
The Walters Art Gallery has nine panels from the windows depicting the Life and Relics of St Vincent.
In 1792 the abbey buildings were sold and by 1797 the Refrectory and the Chapter House had been destroyed. The Lady Chapel was destroyed by 1802.
Alexander Lenoir was given permission by the revolutionary government to remove monuments from churches. It is known that he removed stained glass from the churches of Saint-Denis and from Saint-Germain-des-Prés. he organised an exhibition of these monuments in the closed-down monastery of the Petis-Augustins in Paris which was on display between 1796 and 1816.
It is possible that this panel came into this country via John Christopher Hampp, Norwich art dealer. it is known that Hampp imported French glass via Tailleur who was Lenoir’s glass restorer.

The abbey church of Saint-Germain-des-Prés was originally dedicated to St. Vincent of Saragossa. St Vincent was a deacon of the early Christian church in Saragossa, Spain. Tradition holds that he was martyred in the early 4th century during the persecutions of the Roman emperor Diocletian.
Gregory (c.540-94), Bishop of Tours and chronicler of the early Frankish kingdom records that King Childebert founded the abbey at the instigation of Germanus, Bishop of Paris. Gregory says that Childebert and his brother Clothar were campaigning in Spain against the Visigoths and laid siege to the city of Saragossa. The citizens sought divine assistance by fasting, flagellation and processing through the streets holding the tunic of St. Vincent. Childebert was so impressed he lifted the siege and moved on, sparing the city. Gregory does not record that Childebert was given the tunic of St. Vincent. but a later account relates that Childebert had received the tunic from the citizens of Saragossa in exchange for lifting the siege on their city. This was recorded in a 10th century sermon for the feast of St Vincent in the church. At any rate, Germanus was able to persuade the King to finance the building of the abbey which was completed in 558 and in the same year Childebert died and was buried there. it was the burial place of the subsequent kings of the Merovingian dynasty until the death of Dagobert (d.638/9) who chose to be buried in his foundation of Saint-Denis.
In 1215, the abey church received another relic of St Vincent, part of his jawbone. It was a gift from the future King Louis VIII.
Undoubtedly this latter gift was the impetus for rebuilding and reglazing in the abbey. By this time, the church had been rededicated to St. Germanus and the subsequent reglazing schemes included double windows of the Life and Relics of St Germanus as well as of the Life and Relics of St Vincent.

The Lady Chapel was situated parallel to the chevet of the abbey church, north east of the cloister. Glazing was likely to have been completed by 1247 when Abbot Hugh d'Issy was buried there or by 1255 when an election was held in the chapel. It is said that the financing for the rebuilding of the Lady Chapel came from ransoms paid by the serfs of the abbey in exchange for their freedom. Also, in 1247, Pope Innocent IV issued a bull proclaiming indulgence of 40 days to all those who visited the abbey.

This panel is from the window depicting scenes from the Life of St Vincent. The information we have on the legend of St Vincent comes from the Acta Sanctorum, Acta Martyrium, the Speculum historiale by Vincent of Beauvais and from the Golden Legend, compiled by Jacobus da Voragine.

This panel was originally paired with that showing the Roman proconsul Dacian directing St. Vincent's tortures.

Stained glass panel depicting a scene from the Life of St. Vincent. Originally in the abbey church of St-Germain-des-Prés in Paris. Made in France, c.1240-5.

Williamson, Paul. Medieval and Renaissance Stained Glass in the Victoria and Albert Museum. London, 2003. ISBN 1851774041
Philippe Verdier, 'The Window of Saint Vincent from the Refrectory of the Abbey of Saint-Germain-des-Prés,' Journal of the Walters Art Gallery, vols. XXV-XXVI (1962-1963), pp.39-99
Mary B. Shepherd, "The St. Germain Windows from the Thirteenth-Century Lady Chapel at Saint-Germain-des-Prés," in The Cloisters: Studies in Honor of the Fiftieth Anniversary, ed. E.C. Parker, Metropolitan Museum of Art, New York, 1992, pp.282-301
Mary B. Shepard, "The Relics Window of St. Vincent of Saragossa Saint-Germain-des-Prés," Gesta, XXXVII, no. 2 (1998)
Mary B. Shepard, "French 13th Century Stained Glass from Saint-Germain-des-Prés at Winchester College, Journal of the Society of Master Glass Painters,. XVIII, no.2 (1986-7)
Albert Lenoir, Statistique monumentale de Paris, 1867
Stained Glass before 1700 in American Collections: Mid-Atlantic and Southeastern Seaboard States, Studies in the History of Art, vol. 23, National Gallery of Art, Washington D.C.l, 1987

SAINT VINCENT BURNT ON THE RACK

From a window devoted to the Passion of St Vincent in the Lady Chapel of the abbey of Saint-Germain-des-Prés in Paris. This panel was originally paired with another, now in the Walters Art Gallery in Baltimore, showing the Roman proconsul Dacian directing events.

Originally from the refectory glazing 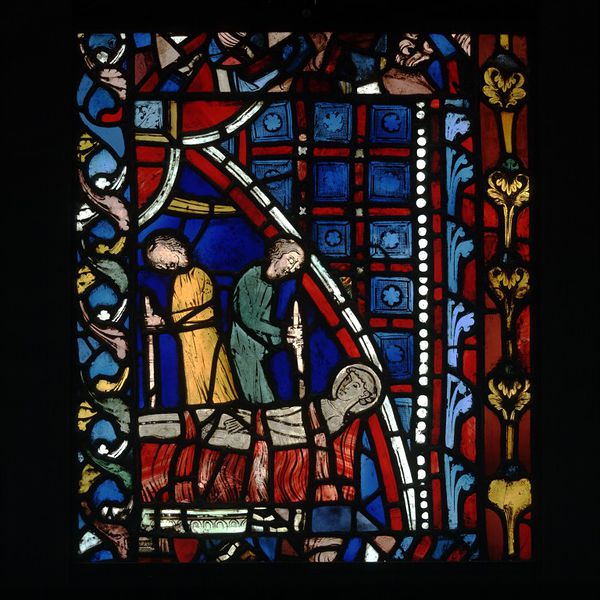