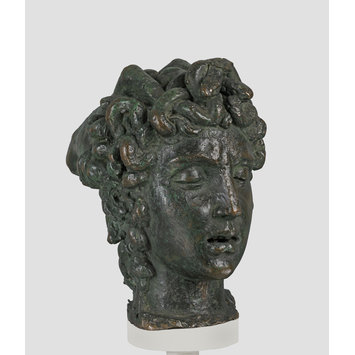 This rare sketch model was made in preparation for the monumental group of Perseus in the Loggia dei Lanzi, Florence. It shows the severed head of Medusa, the snake-haired Gorgon who turned viewers to stone, held by the hand of the victorious Perseus. The casting of the final group, described by Cellini in his autobiography, was an astonishing technical achievement.
This expressive head was acquired by John Pope-Hennessy, who recognised its significance as one of the few surviving models by Benvenuto Cellini, the most celebrated of Italian Renaissance sculptor-goldsmiths.

Bronze statuette, decapitated head of Medusa with a hand holding the head by the hair.

Historical significance: This expressive head was acquired by John Pope-Hennessy, who recognised its significance as one of the few surviving models by Benvenuto Cellini, the most celebrated of Italian Renaissance sculptor-goldsmiths. In Greek myth, the Gorgons Stheno, Euryale, and Medusa (the only mortal of the three) were hideous sisters, winged and snake-haired, who turned all who looked at them to stone. Cellini's famed monumental statue of Perseus (currently in the Loggia dei Lanzi, Florence) shows the hero holding the head of Medusa, with hair of writhing snakes, after he had beheaded the Gorgon with the aid of a reflection in the polished bronze surface of his shield (the gift of the goddess Athena) so as to avoid her deadly gaze. 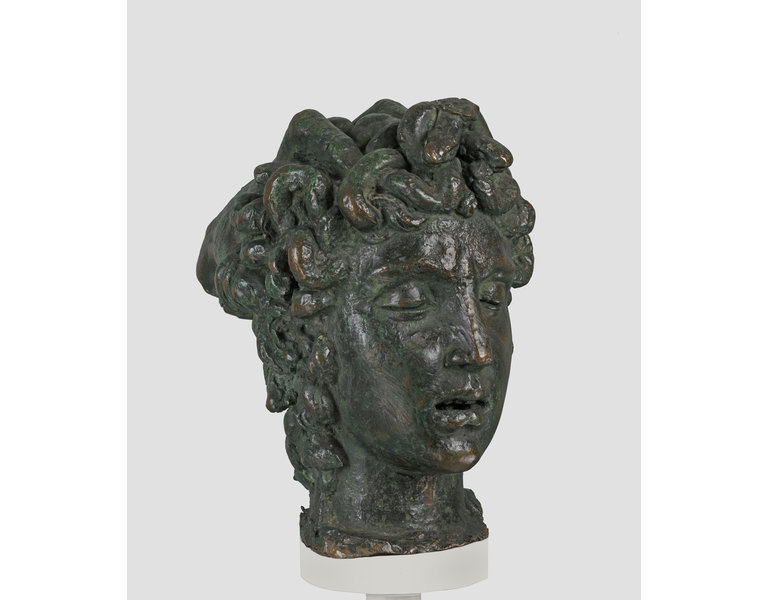