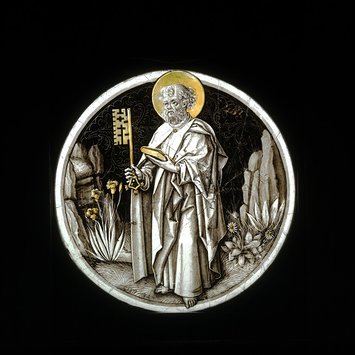 This roundel, until fairly recently, had been considered to be the work of a stained glass artist working in the Swabian region of Germany. This attribution was made because of the black, etched foliate design of the background which is characteristic of that region. More recent opinion identified the artist of the roundel with the circle of the 'Master of the Housebook' (who has also been associated with the 'Master of the Amsterdam Cabinet'). Both the Swabian artists and those associated with the 'Master of the Housebook' were influenced by the same original source material.

There is a roundel depicting St. John the Baptist in the Schnutgen Museum in Cologne which is from the same series as the V&A's roundel. The background of the Schnutgen roundel is also composed of etched foliage and the figure of the Baptist stands on a grassy plain surrounded by rocks and studied botanical arrangements. The execution of his clothing is the same as that in the St. Peter roundel.

The figures of the Schuntgen St. John the Baptist and the V&A's St. Peter are both derived from engravings by Martin Schongauer, a painter and engraver working in Germany at the end of the 15th century.

These two roundels were undoubtedly from a series depicting the Apostles and other important personages associated with Jesus Christ. They may have been made for a church but it is also possible that they were commissioned for a civic building or a private house. Clear roumdels with just silver (yellow) staine and black/brown pigment were made in large numbers and were quite affordable.

In the centre of the roundel is the figure of St Peter holding a book in his left hand and a large key in his right. His tunic and overmantle are in clear glass and the modelling of the folds in the garments is executed by working away a thick matt coating in black pigment. The book and the key as well as his halo are coloured with silver stain. st. Peter stands on a grassy field and there are two distinct species of flora on either side of him, parts of them executed in silver stain. On the edges of the roundel are outcrops of craggy rocks. The background is matt black with a foliate design etched out to reveal the clear glass benearh.

Master of the Amsterdam Cabinet or Master of the Housebook
late 15th century drypoint engraving artist
Metropolitan's Virgin and Child on crescent moon and surrounded by rays = Virgin in Glory
had been attributed to the Master of the Housebook or his circle. More recently the other Housebook attributed panels were ascribed to a Swabian school.
Fragment at Schloss Gross-Karben
Med panel
Schnutgen St John the Baptist roundel (cat.80)
V&A St Peter
attributed to the 2nd Master of the Housebook (tournament scenes one) and identified as Nikolaus Nievergalt, born in Speyer and working in Worms. Artist was probably a Netherlander working in the middle Rhine and could be identified with Nikolaus and possibly several other minor figures. Associated with graphic works, panel paintings, manuscripts, sculpture, book illlustrations and stained glass.

Housebook: fragmentary codex of 65 folios, illustrated with pen and ink drawings (some partly coloured)
compilation of often unrelated texts written in several hands
poems on the nature of the planets

Upper Rhenish influence is evident in the Schnutgen and V&A roundels. They are approximately of the same diameter and have similar backgrounds and borders. So are supposed to be from the same series.
broad borders outlined in black
unusual black painted backgrounds etched with a foliate design
both are in front of a rocky landscape
modelling is achieved by the working away of matt tones (as opposed to building up with brushstrokes)
appear to owe little directly to models in the Housebook - the figure styles are quite different
the compostion of these apostle roundels depend on engravings by Schongauer (esp. St. John the Baptist)
seems this artist and the Housebook artists used similar visual soruces
the etched tendril backgrounds are not ususally associated with the middle Rhineland but rather with that of Swabian workshops 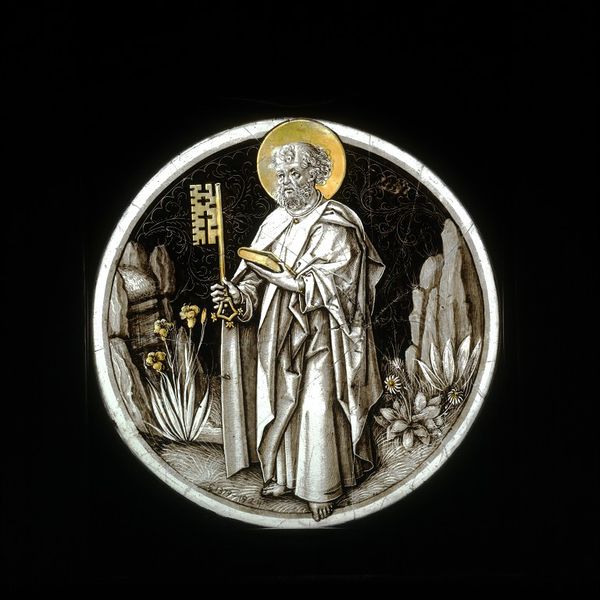