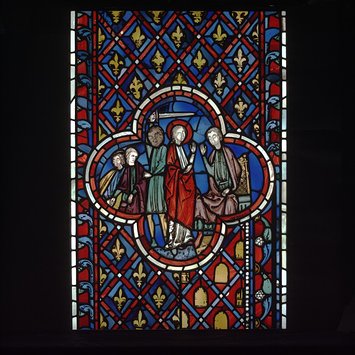 Scene from the story of Daniel

This medallion originally came from the Sainte-Chapelle in Paris. King Louis IX of France built the chapel to house the Crown of Thorns, which he had acquired in 1239. This was a relic of Christ’s passion.

The Sainte-Chapelle was begun in 1241 and dedicated in 1248. It has been described as a huge reliquary in stone. Architecture, sculpture and stained glass combine to produce an effect of astonishing richness. It is often viewed as the archetypal High Gothic construction.

The vast glazing programme has suffered, however. During the first half of the 19th century much glass was removed. Later, it was replaced with modern copies or inventions.

The prophet Daniel, with halo, is shown interceding with Arioch, the captain of King Nebuchadnezzar’s guard. Arioch had been charged with killing all the wise men of Babylon (Daniel 2: 14–15, 24). To the left, behind Daniel, an executioner raises his sword to kill two of the wise men.

The background consists of fleur-de-lis and castles within a diaper. This symbolises the alliance of France and Castile by the marriage of King Louis VIII and Blanche of Castile, parents of King Louis IX. The window, though, has been much restored and is made up from different panels.

Ground diapered with the arms of St. Louis of France, and his mother, Blanche of Castile.

Daniel, with a halo, is shown interceding with Arioch, the captain of King Nebuchadnezzar's guard, who had been charged with eliminating all the wise men of Babylon (Daniel 2:14-15, 24). To the left, behind Daniel, an executioner raises his sword to kill two of the wise men.

Daniel, an Old Testament prophet, belonged to the tibe of Judah. He was taken into captivity when he was a youth and raised and educated in the court of Nebuchadnezzar, King of Babylon (c.605-562 B.C). There he learnt the powers of divination from the wise men of the court. The King had a dream and wished the wise men to interpret his dream. However, the King refused to tell the wise men what the dream was, saying that they should be able to tell him and that he would kill them if they couldn't. The King sent Arioch, the Captain of his guard, to slay them. Daniel stopped him and went to the king and told him what his dream was and what it meant.

Stained glass window depicting a scene from the story of Daniel 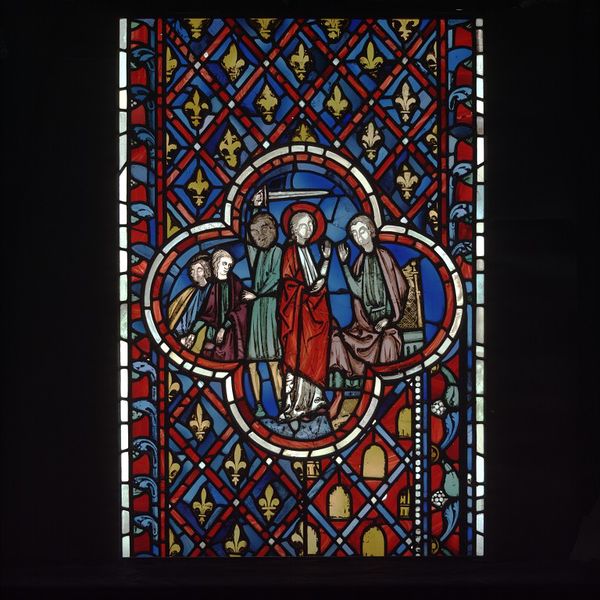