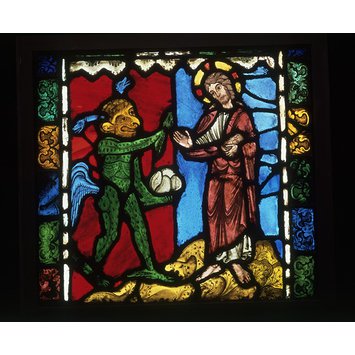 Temptation in the Wilderness

Like much other medieval stained glass, this window has been displayed in a number of locations during its history. It may have originally been produced for the Romanesque Cathedral of Troyes, which was destroyed by fire in 1188, but it is also possible that it could have been from another building nearby - the collegiate church of Saint-Etienne. By the nineteenth century the window had been installed in the Lady Chapel of Troyes Cathedral, which had only been built in the thirteenth century. The window is likely to have been removed from the Cathedral during renovations (1849-66) when much of the glass was dispersed.

Christ is shown being approached by the Devil, who holds a pile of four stones in his left hand. The panel illustrates the first temptation of Christ, after he had gone into the wilderness to fast after his baptism. The Devil said to him, 'If thou be the Son of God command that these stones be made bread' (Matthew 4: 3).

Christ to the right. Satan, on the left, as a green demon with snakes coming out of his head. He offers the stones to Christ. Border of yellow, green and blue foliage pattern.

see note
Order that these stones be made bread.
A missing inscription with the words 'DIC VT LAPIDES ISTI PANES FIANT' once ran along the top of the panel.

(1188) Romanesque cathedral at Troyes destroyed in a fire.
(1208) Bishop Hervé begins the rebuilding. By the time of his death in 1223 the choir was completed except for aisles and chapels.
(1849-1866) Renovations in the cathedral. Much of the glass was dispersed and those that survived were subsequently dispersed.

It has been considered that these panels (C.105-108-1919) were made for the Romanesque Cathedral at Troyes; they survived the fire and were re-used in the new Cathedral, with additions of borders to make them fit the new window openings. It has been believed that they were put in the Lady Chapel sometime after 1223. This assumption was based on three 19th century descriptions (see Arnaud, Guilhermy and Fichot) describing the panel in the cathedral.

More recent opinion suggests that they could have come from another church in Troyes, perhaps from St-Etienne; still dating from c.1170-80 with 13th century additions. Little (see bibliography) conjectures that the panel was originally in the Collegiate Church of Saint-Etienne in Troyes. This is based on the size of the panel and a reconstruction of the entire narrative window from the surviving panels of the cycle. The proposed reconstruction and the measurements (albeit from little surviving evidence) would fit the narrow axial lancet chapel windows at Saint-Etienne).

This panel along with Museum number C.108-1919, panels in the Musée Cluny in Paris and Montreal formed part of a Temptation of Christ window. The Montreal panel shows Christ seated upon the Temple with the devil tempting him to throw himself down. The Cluny panel shows Christ ministered to by angels after the third temptation.

The panels had been on loan from J. Pierpont Morgan Sr. from 24 January 1910.

(Little, Gesta, 1981) has identified what he feels to be four series of narrative glass originally from Troyes Cathedral. Two of these series relate to panels int he V&A. This information is taken from the descriptions recorded in the 19th century by Arnaud, Guilhermy and Fichot:

2) Temptation series: (Matthew 4:3) If thou be the Son of God command that these stones be made bread.
- two panels in V&A (C.107-108-1919), one in Canadian private collection
- earliest known of this subject
- the story of the Temptations of Christ are recorded in some depth in the Gospels of Matthew and Luke and referred to in passing only in Mark.
- the traditional art historical understanding of the ordering of the temptations is as follows:
The command to turn stones into bread
The taking of Christ up to the top of the temple and challenging him to thrown himself down.
The taking of Christ up a mountain and offering him dominion over all the kingdoms of the world.
- however, the temptations as recorded in Matthew are as above but in Luke the order is as follows:
Stones, mountain, temple
Little makes reference to an illustrated psalter from Paris, dated to about 1200, which shows the temptations in an expanded format. Arnaud's descriptions of these panels in 1837 only record the usual scenes but with one addition - a scene of Christ with a vase full of gold and silver coins at his feet (the whereabouts of this panel is not known).
For this Temptation series, Little proposes a 6-scene window and suggests that the whole window would have been too small for the openings in the pre-fire Romanesque cathedral at Troyes and so believes that these panels were probably originally in a smaller church.

Possibly originally in the Collegiate Church of Saint-Etienne, Troyes. 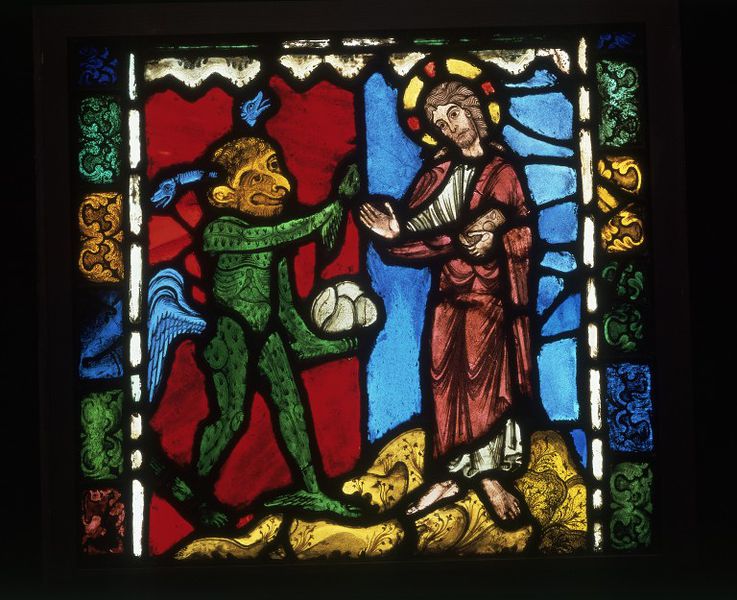