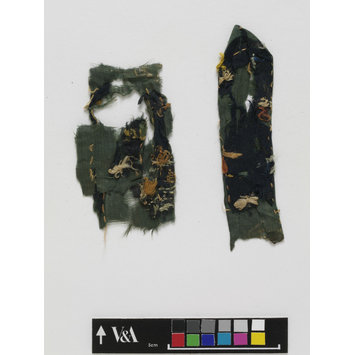 These embroidered fragments are of monochrome plain weave blue silk backed with monochrome plain weave green silk and stitched with cream thread. They would once have formed part of a decorative streamer at a Buddhist shrine. They were recovered from Cave 17 of the Mogao Grottoes. This shrine site is one of China’s great Buddhist pilgrimage complexes and is situated near the oasis town of Dunhuang.

The site is part of an area of Central Asia now called the Silk Road, a series of overland trade routes that crossed Asia, from China to Europe. The most notable item traded was silk. Camels and horses were used as pack animals and merchants passed the goods from oasis to oasis. The Silk Road was also important for the exchange of ideas – while silk textiles travelled west from China, Buddhism entered China from India in this way.

These textile pieces were brought back from Central Asia by the explorer and archaeologist Sir Marc Aurel Stein (1862-1943). The Victoria and Albert Museum has around 600 ancient and medieval textiles recovered from the Silk Road by Stein at the beginning of the twentieth century. Some are silk while others are made from the wool of a variety of different animals

Two strips of embroidered plain woven blue silk backed with monochrome plain weave green silk and stitched with cream thread. The embroidery executed with different coloured silk threads, white, orange, yellow and blue showing the remains of floral design. One piece has been sewn into a point at one end.

Similar to other fragments found in Cave 17 of the Mogao Grottoes (Caves of the Thousand Buddhas), although the pieces have no identifying Stein number themselves. 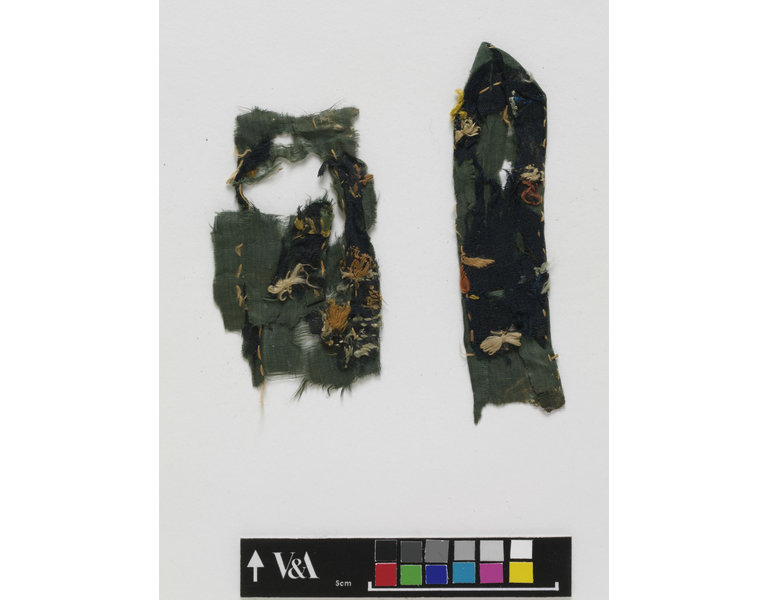