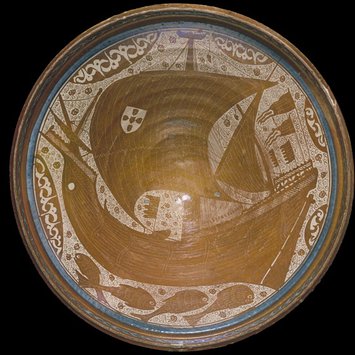 This spectacular bowl is made of earthenware covered with an opaque tin glaze and painted in lustre, a metallic pigment. It is decorated with a ship that has the arms of Portugal on its sail, and it may well have been commissioned by a Portuguese maritime merchant. It was long presumed that this bowl came from the famous lustre potteries around Valencia on the east coast of Spain. They were active from around 1300, when this region was under Christian rule, although the techniques employed (notably the tin glaze and lustre decoration) were of Islamic origin. It is thought that these techniques were introduced to Valencia by potters from Málaga, a port on the south coast of Spain that remained in Muslim hands until 1487.

Ceramics were produced at Málaga for export as well as local consumption: the famous Arab traveller Ibn Battutah recorded in about 1350 that the city produced, ‘wonderful gilded pottery that is exported to the remotest countries’. By around 1400, however, Valencia was rapidly overtaking Málaga as a supplier of fine pottery to the wealthy, and production in Málaga appears to have ceased abruptly by about 1450.

In 1983 scientific analysis of the clay body of the bowl showed that it contained schistose inclusions characteristic of the wares from Málaga itself. The bowl, which can be dated to the mid 15th century, therefore demonstrates that the lustre workshops of Málaga were still producing ceramics of outstanding quality during the last decades of their existence. It stands at the end of one great tradition and at the beginning of another.

Deep sided conical bowl. Earthenware, covered with a white tin-glaze on front and back, and decorated with a copper-coloured lustre. The cavetto of this bowl is filled with a sailing ship of a Christian type, whose sail bears the arms of ancient Portugal. Below it swim four large-bodied fishes, which resemble those on the Fatimid lustre jar (C.48-1952). The bowl's exterior is decorated with the large palmette ‘trees’ that are characteristic of Nasrid lustre production. Made in Málaga, the lustre-producing capital of Nasrid Spain.

Earthenware under an opaque white glaze, with colour in and lustre over the glaze

The history of lustre pottery in Spain began with the import of Abbasid lustrewares in the 10th century, when most of the country was under Muslim rule. Local production began at a later date, probably due to the transfer of the requisite technical knowledge from Fatimid Egypt. This relationship can be appreciated from the formal and stylistic resemblance of the large-bodied fishes on this dish to those on a Fatimid lustre jar in the V&A (C.48-1952), as well as from the form of the large palmette ‘trees’ on the bowl’s exterior.

The most famous Spanish lustre pottery was produced under Christian patronage at Manises (Valencia), from the early 14th century; but before that the main lustre-producing centre in Spain was Málaga, called Malaqah in Arabic. Málaga was one of the best fortified coastal cities in the western Mediterranean; it was an important port and trading centre; and it had been the centre of a ceramics industry since the 10th century. Under the Nasrid sultans of Granada (1230-1492), it became a major centre of lustre production, and this was where the magnificent “Alhambra vases” were manufactured, which are the largest Islamic ceramics in existence (varying between 1.2m and 1.7m in height).

The “Alhambra vases” were probably produced for local consumption, to adorn the palaces of the region's Nasrid rulers, but there is ample literary, documentary and archaeological eveidence that Málaga’s products were exported throughout Europe and the Middle East.

A geographical treatise written in 1337 said of Málaga, “It is famous for several industries… for iron work and for its golden pottery, the like of which is not known elsewhere”; and the Moroccan traveller Ibn Battutah recorded about 1350 that, “At Málaga is made the wonderful gilded pottery that is exported to the remotest countries…”. These lands included England. Queen Eleanor of Castile, wife of Edward I of England, had pottery imported from Málaga in 1289, when the clerk of the port of Sandwich reported the arrival of “42 bowls, 10 dishes and 4 earthenware jars of foreign colour” (extranei coloris).

A good deal of Málaga ware has been found at the medieval site of Fustat in Cairo, Egypt. A cobalt-blue and lustre dish found there has the word Malaqah inscribed within its footring, as does a sherd in the V&A collection (C.1606-1921), also found at Fustat. The fact that the place of manufacture was recorded on goods made for export attests to Málaga’s international renown at the time. Indeed, the city's name lived on after lustre production ceased there, since the Latin term for Málaga war, opus de Melica, which was in use by the 14th century, is the origin of the word maiolica, used to describe the tin-glazed ceramics produced in 16th-century Italy.

The V&A bowl itself may well have been made for export. The depiction of ships has a long tradition in the pottery of the Islamic west, but the type of ship which fills the cavetto of this bowl is Christian. Its sail bears the arms of ancient Portugal, suggesting that it was commissioned by a Portuguese maritime merchant who wanted to commemorate his success through the ownership of a spectacular and expensive Malagan lustre bowl.

The V&A bowl has a significant place in the scientific study of Nasrid wares. Until 1983 it was classified as Valencian ware, but analyses conducted on it in that year identified the provenance of schist inclusions in the clay body as the Málaga region. These results have been crucial for recognising the importance of the city's lustre industry, and it is now generally agreed that the lustre technique was introduced to Valencia by potters from Málaga. By the start of the 15th century, Valencia was rapidly overtaking Málaga as a supplier of fine pottery to the wealthy; and, though Málaga was not captured by the Catholic Kings until 1487, production there appears to have ceased abruptly before the middle of the 15th century. The V&A bowl therefore stands as the last great product of the Málaga lustre industry, made shortly before it disappeared.

Bowl with lustre-painted depiction of a sailing ship, Spain (Málaga), 1425-50.

BOWL
Tin-glazed earthenware painted in blue and lustre
SPANISH (formerly NAHRID, Malaga); 1425-1450
The arms are those of ancient Portugal. [Used until 09/2003]
Jameel Gallery

Málaga in Spain was still under Muslim rule when this large bowl was made. The city had been an important centre of lustre production since the early 13th century, and its wares were exported as far as England and Egypt.

This bowl may have been made for the export trade. It shows a long-haul sailing ship of the period with the arms of Christian-ruled Portugal on its sail.

Earthenware under an opaque white glaze, with colour in the glaze and lustre over the glaze 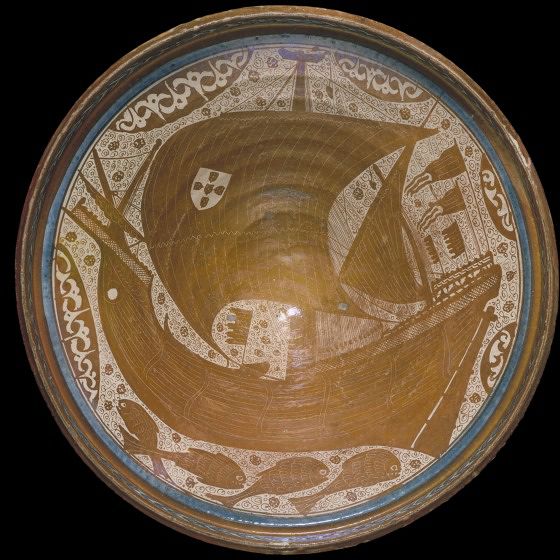