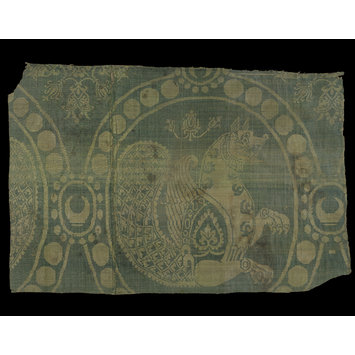 This patterned silk fragment with a green ground and greenish-yellow pattern shows the fabulous creature, the sēnmurw, enclosed in a roundel of pearls. Part bird, part beast, the sēnmurw is a creation of Sasanian art, although it was derived from more ancient Babylonian and Assyrian cultures, as well as from the sea-horse of Greek art.

The fragment comes from the same weaving as two pieces associated with the relics of St Helena at St Leu in Paris, now in the Musee des Arts Decoratifs. Relics, sometimes brought back to Europe by Crusaders, were frequently wrapped in precious silks.

Fragment, faded bluish-green ground and pale yellow patterns, main decoration formed by a sēnmurw facing right within a pearled roundel. A smaller circle surrounded by pearled dots and hosting a crescent-like pattern links the sēnmurw roundel to another on each side, these two flanking roundels are only partially visible. Weft-faced compound twill, the main and binding warp are z-twist, while the weft has no discernible twist. There are several weaving mistakes (at least 8 points) where the warp has not lifted as the design required.

Said to have been found in the reliquary of the head of St Helena in the church of St Leu in Paris. Technical analysis confirms that this fragment comes from the same weaving as two pieces associated with the relics of St Helena, with a sēnmurw facing left in the Musee des Arts Decoratifs, thus making it at least 8th century. It has been argued that early Central Asian silks are distinguished by the use of floss, gummed silk for the paired warp, but by the 7th to 8th century warp groupings of three to four z-twisted threads are found.

Historical significance: This silk shows symbols related to Sasanian royal imagery, such as the pearled circle and the small crescent roundels.

This textile is grouped with others showing similar iconography and style, the Paris fragment, the Shroud of St Remi now in Rheims, a garment from a tribal grave at Mochtchevaya Balka in the North Caucasus. No such silks have been found in Iran. Smaller scale polychrome sēnmurw silks have survived in greater numbers than the large scale version (761-1893). Winged horses and winged lions were popular beasts in Sasanian mythology but the most striking was the sēnmurw. Part bird, part beast, the sēnmurw is a creation of Sasanian art, although it was derived from more ancient Babylonian and Assyrian cultures, as well as from the sea-horse of Greek art. When the Arabs conquered Iran they took over the Sasanid workshops and incorporated the existing repertoire of designs into their own silk weavings with little modification. The naturalism of Greek art had already, in the few remaining relics of the Sasanid dynasty, given way to a degree of stylisation which was further extended in Byzantine and, more particularly, Islamic textile arts. It is therefore not surprising to find a Sasanian sēnmurw on an Iranian Islamic silk a century or more later. Three figures (visiting ambassadors from the region south of Uzbekistan) on a painting in Afrasiab, an ancient city near Samarkand, wear costumes with Sasanian motifs, including the sēnmurw. The painting is dated to the late 7th century by a Sogdian inscription (Albaoum, L. I., Zhivolis Afrasiab, Tashkent 1975).

The correct Middle Persian (Pahlavi) form is sēnmurw. One would expect the final -w to become -v in New Persian, but in fact New Persian uses a different dialect form, sīmurγ (sīmurgh), so the form *sēnmurv does not actually occur; Professor Nicholas Sims-Williams (29/02/2012)

Iran or Transoxiana, or possibly Sogdiana 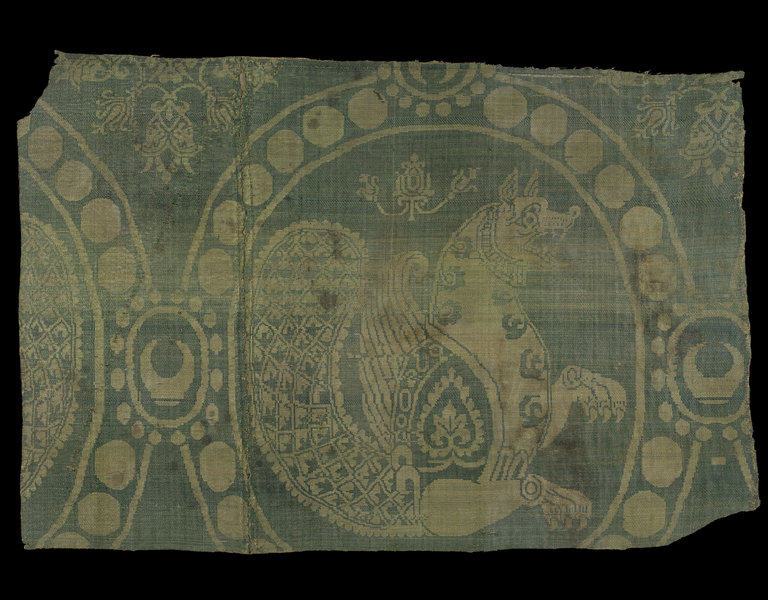